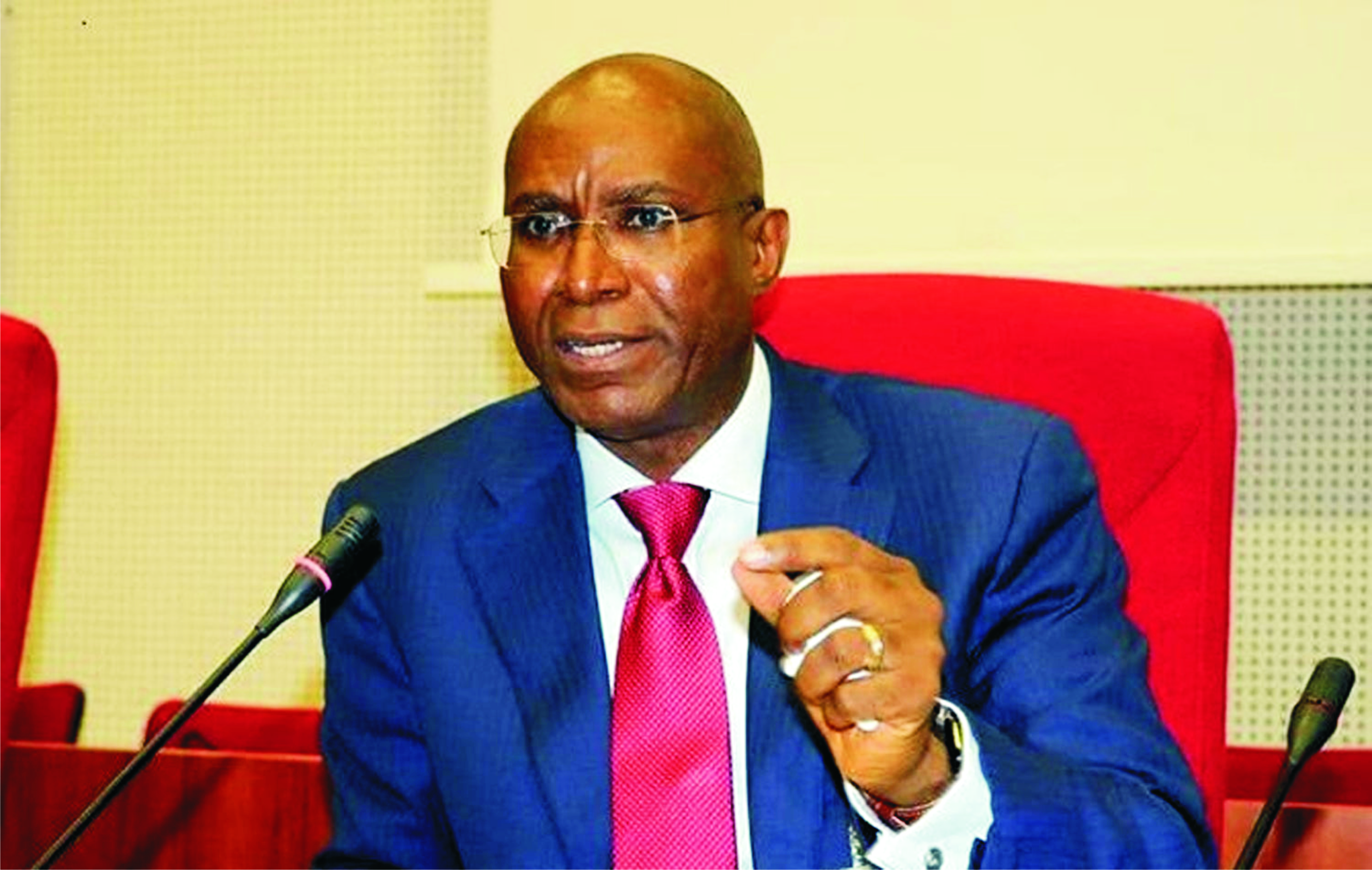 A local advocacy group, the Niger Delta Peace and Development Advocates (NDPDA), has frowned at claims by the Deputy Senate President, Ovie Omo-Agege, that governors of the Niger Delta states were diverting the 13 per cent derivation funds, describing it them as self-serving.
It also quashed the advocacy of the Senior Special Assistant to the President on Niger Delta, Senator Ita Enang, for the establishment of a derivation commission, saying it was a vacuous political talk lacking in genuine intent and purpose.
At an interactive session with journalists in Abuja, yesterday, the NDPDA President, Mr. Efe Mac-Daniel, said Omo-Agege and Enang were merely pandering to the prejudices of the region’s oppressors.
Mac-Daniel said the comments were futile efforts aimed at diverting the attention of Nigerians from the glaring failure of the President Muhammadu Buhari administration in addressing the developmental challenges plaguing the region.
According to him, the Niger Delta Development Commission (NDDC) remains under-funded by the Federal Government, which has virtually rendered the interventionist agency comatose.
He said: “What diversion is Senator Omo-Agege talking about when almost all states in the Niger Delta have oil producing area development commissions?
“The most strategic road in the region, which is the East-West Road, remains uncompleted and abandoned. That is a federal road. But the Deputy Senate President and the presidential aide, two prominent sons of the region, prefer to play politics with our development because of their 2023 ambition.
“We also wonder why the duo are not interested in the upward review of the derivation formula when the Federal Government continues to short-change our region.
“For years, the government at the centre has been taking 87% of the revenue from our resources while a paltry and dubious 13% is paid to oil producing states. Who collects the royalties from gas flaring while our region and environment remain polluted? They do not see the injustice and inequity in these but rather prefer to whip up sentiments against governors of the region.
“We already know and have identified those working against the interest of the Niger Delta. We are determined not to reward internal collaborators from the region any longer with high political offices. At the appropriate time, we will launch a campaign against such persons,” Mac-Daniel said.
He called on the two leaders to retrace their steps, saying the people of the region were now more politically conscious and aware of their rights.
He also noted that the derivation fund belongs exclusively to the oil producing states and that the Federal Government cannot determine and dictate to the states how it is disbursed.

The Police Service Commission (PSC) has approved the appointment of Bello Sadiq, who is currently the AIG, Zone 1, Kano, and Dandaura Mustapha, AIG, Zone 4, Makurdi, to the substantive rank of Deputy Inspector General of Police (DIG).
Sadiq was also appointed to fill the vacant position of DIG, Force Intelligence Bureau (FIB), while Mustapha whose appointment takes effect from October 20, 2022, would be replacing DIG Sadiq, who is expected to retire from the service on the said date.
This was contained in a statement, yesterday, by the PSC spokesperson, Ikechukwu Ani.
Ani stated that the PSC also approved the promotion of 12 commissioners of police to the next rank of assistant inspector general of police (AIG).
According to him, the new AIGs are CP Egbetokun Olukayode Adeolu, Admin Medical, Falamo, Lagos; CP Emienbo Tony Tuesday Assayomo, Kwara State Command; CP Christiana Ibiso Cookey, Welfare, Force Headquarters; CP Evelyn Tamunoimi Peterside, Eastern Port; and CP Eboka Friday, Rivers State Command.
Others are CP Adesina Musbau Soyemi, Nasarawa State Command; CP Asafa Adekunle, CMOT, FCT; CP Edward Chuka Egbuka, Kogi State Command; CP Janet Agbede, Abia State Command; CP Oruebo Josiah Daso, Research and Development, FHQ; CP Olokode Taoheed Olawale, Osun State Command; and CP Abutu Yaro, Edo State Command.
He noted that 57 assistant commissioners of police (ACPs) were also promoted to Deputy Commissioners of Police (DCPs).
They include ACP Suel Yerima Gimba; ACP Alhaji Mohammed Danladi; ACP Richard BalaGara; ACP Lasis Titilola; ACP Obuagbaka John; and ACP Aliko Mohammed Dankoli.
Others include ACP Silas BamideleAremu; ACP Sylvester OnyieUzoefuna; ACP Shaq Ismail Salihu; ACP MagajiIsmaila; ACP Ali GarbaSarbi; ACP Theodore ChukwuemekaObasi and ACP Sarah IdowuEhindero, among others.
Ani added that the PSC also promoted 60 Chief Superintendents of Police to the rank of Assistant Commissioners of Police.
Those promoted are CSP Odion Benedict Aire; CSP GarbaSuleyaro; CSP AbayomiAkinpelu Oni; CSP Badamasi Musa, former DPO 9th Mile Division, Enugu; CSP Rabiu Musa; and CSP BamideleAwoniyi.
The PSC spokesman further stated that the commission approved the promotion of 286 Superintendents of Police to Chief Superintendents, noting that it also approved the promotion of 417 senior police officers.
He added that the PSC, at its 15th plenary meeting holding in Abuja and presided over by the acting chairman of the commission, Justice Clara Bata Ogunbiyi (rtd), also approved promotion examinations for officers scheduled to start from next year 2023 in line with the Public Service Rules.
“The commission had earlier approved the commencement of promotion examinations for police officers from 2023. The commission took notice of the Public Service Rules 020701, 020702, 020703 and 160304 which prescribed examinations as one of the conditions for promotions in the public service, and approved that henceforth promotion examination will be a pre-requisite for promotions in the Nigeria Police Force.
“The commission also approved the setting up of the Police Promotion Examination Board. The 11-Member Board will have a representative of the Nigeria Police Force who must not be below the rank of a Deputy Inspector General of Police.
“The on-going I5th Plenary Meeting of the commission will resume on Thursday, October 6, 2022, with an interactive meeting with Deputy Commissioners of Police recommended for promotion to the rank of Commissioners of Police,” Ani stated.

No fewer than six communities, including some government primary and secondary schools have been engulfed by a surging flood in Ogba/Egbema/Ndoni Local Government Area of Rivers State.
This is even as the Eze Igbu Ubie of Ubie Kingdom of Ahoada West Local Government Area, Eze Okpokiri Augustine Maxwell, has cried out for help to salvage his people from being completely submerged, and blamed the Federal Government for failing to do the necessary things to check the perennial flooding in his kingdom.
According to the reports, the affected communities are Obiofu, Utu-Umuoriji, Ase-Azaga, Ogbeogene Utuechi and Agwe, among others.
All the communities are said to be within the Ndoni axis of the local government.
Though details of the incident are still sketchy as at press time, sources within the affected communities said that residents were having hard timessalvaging their properties and farm produce as the surging flood water is speedily overrunning most parts of the area.
However, in an interview, an Environmentalist, Ikechukwu Ojoba, said some other communities were also being threatened, and may be submerged soon.
He mentioned the communities being threatened toinclude: Kriegani, Aligwu, Idu-Obosiukwu, Idu-Osobile, Agbogwe, Usomini-Omoku, Obieti 1 and Ebeocha, respectively.
According to him, a fact-finding mission,which was carried out last Monday, revealed that farmlands and crops worth millions of Naira had been badly affected by the flood.
The affected residents were said to have been confused as a lot of them donot have any alternative place to relocate to.
Attempts to reach officials of Ogba/Egbema/Ndoni Local Government Area were not successful as at press time, yesterday.
Meanwhile, the Eze Igbu Ubie of Ubie Kingdom of Ahoada West Local Government Area,Eze Okpokiri Augustine Maxwell, has blamed the Federal Government for failing to do the necessary things to check the perennial flooding in his kingdom.
Okpokiri, who said this in an exclusive interview with The Tide in Port Harcourt, said his people were helpless in the face of the surging flood water.
He said, “The flooding issue is a very sympathetic situation as far as Ubie Kingdom is concerned
“They said we should move to higher grounds.How do we move?Who will help us? As far as I am concerned, our people are helpless”, he said.
The royal father regretted that Ubie Kingdom had not received any assistance from any quarters as far as flooding was concerned, adding that the kingdom had lost properties, including human lives to flooding.
“Ubie has lost buildings, farmlands, including lives in the last three years to flooding, and there is no assistance from anybody”, he said.
He said farmers in his kingdom were now in panic, adding that some of them have started harvesting crops to avoid being destroyed by the coming flood waters.
“Our farmers have started harvesting crops that have just been planted”.
He also said the last flooding rendered many of his people homeless, stressing that those affected were yet to recover.
Okpokiri faulted claims by the National Emergency Management Agency (NEMA) that relief materials were donated to victims in previous years, stressing that none of his people received relief materials from any Federal Government agency.
According to him, as the king of the Ubie Kingdom, his palace ought to be aware of any agency or company bringing relief materials to his people, alleging that the relief materials, if any,may not have been given to the right people.
The king blamed the Federal Government for not doing enough, stressing that proper attention were not being given to the issue in the Orashi region.
The National Emergency Management Agency (NEMA) had recently directed communities in the Orashi part of the state to begin to move to higher grounds as the region may be affected by massive flooding this year.
Some residents of Ubie and Engenni kingdoms, who also spoke on the issue, said government did not help them during previous flood incidents.
They called on the government to dredge the Orashi River to facilitate the free flow of water into the Atlantic Ocean.