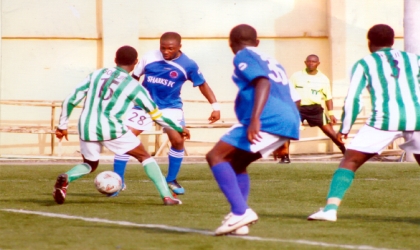 The Delta  State Chapter of the Association of Local Governments of Nigeria (ALGON) on Wednesday inaugurated the Central Organising Committee for its maiden Delta State Local Governments Sports Festival.
The Chairman of Delta ALGON, Mr Constantine Ikpokpo, said in a statement that the programme was an effort by the local governments to contribute their quotas toward the development and promotion of grassroots sports.
“We realised that more needs to be done to frequently groom and to produce more athletes that will represent Delta State and Nigeria in various national and international events.
“The committee, which is chaired by Prince Kelly Penawou, Special Adviser to the Delta State Governor on Local Government Affairs, is composed of two local government chairmen from each zone of the state.
“It is selection of notable Delta State sports personalities and veterans and seasoned sportsmen and administrators, including Yusuf Ali and Seigha Porbeni,’’ Ikpokpo said.
In his comment, Penawou commended Governor Ifeanyi Okowa of Delta, for expressly endorsing the festival and agreeing to be its Chief Ambassador.
Also, Harrison Ocholor, Managing Director of Hightime Media Management Limited, the project consultants, said that the first edition, scheduled for October 2020, would feature athletics, boxing, football, tennis, swimming, chess and scrabble.
“In order to raise the profile of the event and inspire competition among participants, the event will be open to all categories and ages of athlete’s indigent or resident in the local government areas.
“We have no problems with top international, national or state athletes competing with junior athletes.
“It is all good for the event and doesn’t hamper talent discovery.
“It will rather inspire junior athletes to aspire to be at their best and their performance will determine if they are materials to be groomed for higher events,” Ocholor said.