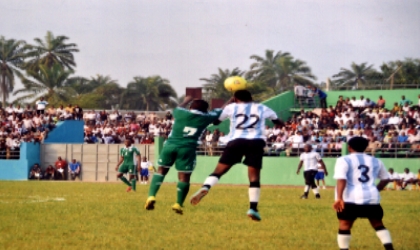 As part of the tradition and requirements for the National Sports Festival, the ‘Unity Torch’ which symbolises unity and the symbol of the festival has been received in Calabar,the Cross River State capital by the Cross River State Governor, Prof. Ben Ayade, at the U. J. Esuene Sports Stadium, Calabar.
Speaking during the reception of the unity torch, the state governor, Prof. Ben Ayade said that the state is a major player in the National Sports Festival and is happy to have received the torch, adding that the enthusiasm in the air as conveyed by the athletes indicates that they are ready to storm Edo 2020 and win many laurels.
The Governor who was represented by the Deputy Governor,  Prof. Ivara Ejemot Esu, averred that “Cross River State no dey carry last” and that the state athletes have been training very hard and he is sure they will come back with as many gold medals as possible and make the state proud.
He wished the athletes the best as they compete in the festival, calling on Nigerians to watch out for Cross River athletes as they are ready to give them the best competition.
Also speaking, the Cross River State Commissioner for Sports and Cinematography, Chief Offu Aya stated that Athletes from the state have been training and are ready to make Cross River proud and return back her glory days, adding that their rigorous training would pay off as they compete against their opponents from other states.
The Commissioner charged them to be good ambassadors of the State and put in their best to ensure that many laurels in Golds are won for the state.
On his part, the Zonal Coordinator, South South Federal Ministry of Youth and Sports, Mr Sylvester Essiet, explained that every festival, the torch of unity goes round the federation, informing that the significance is that it promotes peace, unity and friendship, which is the hallmark of sports.
He further explained that the unity torch relay was flagged off on the 30th of January, 2020 by the President and has gone round the states in the Noth East, North Central, North West and South East while Calabar marks the beginning of the South South states tour, noting that after the South South states, the torch would move to the South West and finally to Edo State on the 22nd of March for the official opening ceremony of the 20th National Sports Festival.
Mr Essiet also informed that the host state is more than 90% ready for the festival and all the athletes and sports enthusiasts are looking forward to a fantastic and robust festival come 22nd March to April 1, 2020 in Edo State.
He therefore, called on all stakeholders irrespective of their state of origin to support and make sure it succeeds, noting that the National Sports Festival is an opportunity and a platform for the country to identify and produce athletes that will represent the country continentally.

Milo Championship Gets Tip Off Date