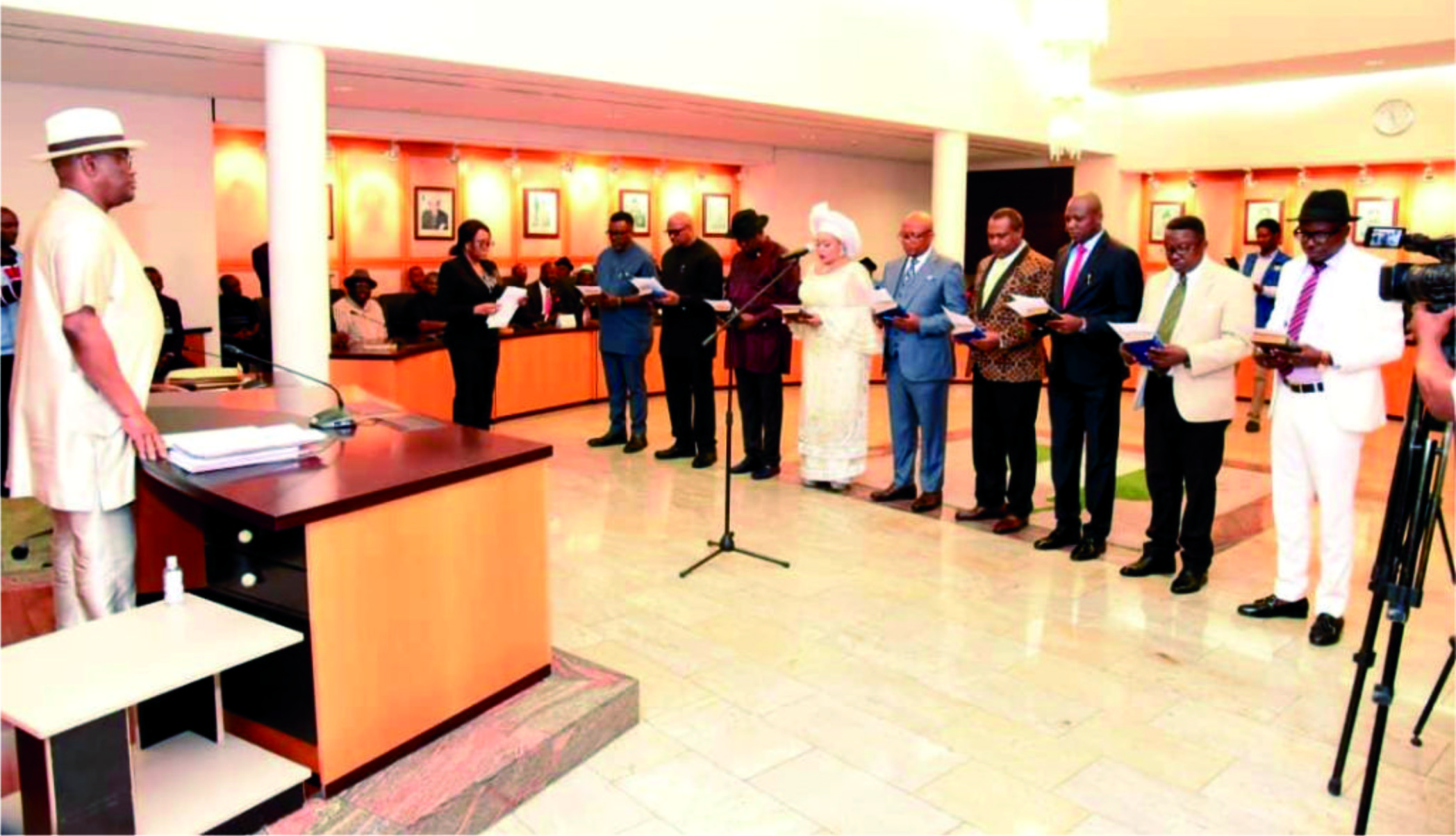 Last week, the Rivers State Governor, Chief Nyesom Wike expanded the state Executive Council as he swore in nine new Commissioners. The Commissioners who were earlier screened by the state House of Assembly were on Wednesday sworn in and also given their portfolios during the State Executive Council meeting.
The new Commissioners and their portfolios included: Barr Eloka Tasie-Amadi, Chieftaincy Affairs; Hon Boma Iyaye, Sports; Hon Diameter Herbert-Miller, Power; Tonye Oniyinde, Culture and Tourism; and Dr Tamunosisi Gogo, Gaja, Water Resources.
Others were: Dr Igbiks Tamuno, Environment; Hon Emeka Onowu, Special Duties, Governor’s Office; Prof Chike Princewill, Health, and Mr Ohia Prince, Ministry of Youth Development.During the swearing ceremony in Government House, Port Harcourt, Governor Wike warned them to shun ethnic jingoism, saying they were appointed to serve the state and not their ethnic nationalities.
“Don’t use my administration to be an ethnic superstar. You are appointed to serve the people of Rivers State, not a particular ethnic group”, he said.
In similar vein, the state Chief Executive, last Tuesday, swore in 17 new Permanent Secretaries to invigorate the Rivers State Civil Service. The newly appointed Permanent Secretaries were yet to be drafted to specific ministries.
In response to the dreaded Coronavirus epidemic ravaging the world, the Rivers State Government, last week, took drastic measures to protect the state. At the state Executive Council Meeting held last Wednesday, the Council directed the Honourable Commissioner for Health, Prof Chike Princewill to cast a wholistic look at the development and work out a comprehensive plan for tackling the virus in Rivers State.
The International Sports Press Association (AIPS) World Executive Committee Meeting and the AIPS Africa Meeting billed for Port Harcourt, the Garden City, in October this year, was another issue at the front burner, last week.
In a bid to organise a world class event, the state Government, last week inaugurated a thirteen- man committee to organise the event.
Swearing in the Committee which is headed by the the National President of Sports Writers Association of Nigeria (SWAN), Honour Sirawoo, the Governor emphasised that everything needed to make it a successful event that would leave an indelible impression, should be done.
“ This is the first time that Nigeria is hosting the event and it is happening in Rivers State. Committee members must work together to place Rivers State on the global map.
“ We are hosting international sports journalists. This is an opportunity to promote Rivers State. After the meeting, the international journalists should be our global ambassadors”, Wike said.
Rivers State Government House was in a mourning mood last week, following the sudden demise of the Chaplain of the Government House, Port Harcourt Chapel of Everlasting Grace, Venerable Sunday Opara.
Governor Wike led a delegation of the state Government on a condolence visit to the family of the deceased on Friday. He expressed shock at the development, saying he had no knowledge that the late cleric was even ill.
The Governor who condoled the family assured that the state Government would identify with the family during the burial and also take care of the family he left behind.
He described the late Opara as a committed official who served God and the state passionately, and promised that the positive roles he played in the development of the state would not be forgotten.
Responding on behalf of the family, the former Deputy Speaker, House of Representatives, Rt Hon Austin Opara, thanked the Governor and the State Executive Council for identifying with the family at their moment of grief.
Last week, Governor Wike announced the plan by the state Government to construct a five- star hotel at the Port Harcourt Pleasure Park to make it a comprehensive package for leisure and tourism.
He announced this last Friday during the official opening of the Ultra-modern Michael Garden Restaurant at the Pleasure Park.