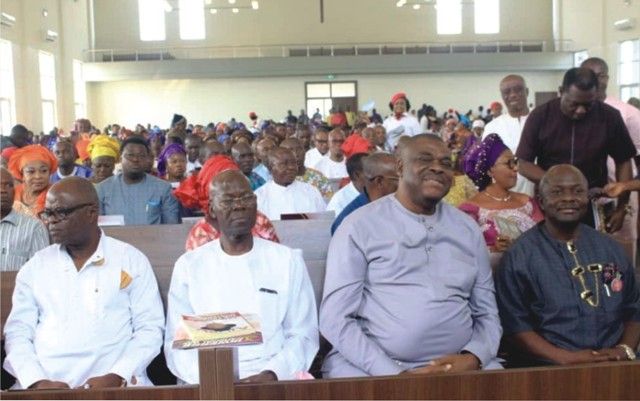 Barely days to the end of 2019, Governor Nyesom Wike of Rivers State has been declared the most outstanding Governor in Nigeria, in terms of fiscal development, people oriented projects and security.
Chairman of the State’s Peoples’ Democratic Party (PDP), Bro. Felix Obuah stated this at the weekend when he hosted a cross section of youth leaders in Ogba/Egbema/Ndoni Local Government Area of the Rivers State.
Obuah in a statement by his media aide, Jerry Needam, and made available to The Tide, said his assessment was borne out of careful evaluation of the Governor’s sterling performance about six months after his second term inauguration.
Obuah stated that “while the ovation that greeted Governor Wike’s remarkable and excellent achievements during his first tenure was yet to die down, he is already working to repeat history with numerous projects on the ground”.
Listing what he called “the array of projects” that makes the Governor stand out amongst his colleagues, Obuah said the “historic and simultaneous construction of three flyovers in the State is a master stroke”.
The statement reads, “Governor Nyesom Wike of Rivers State is the best Governor in terms of infrastructural development, security, regular payment of salaries and entitlements to civil servants in the State, amongst others.
“As if that is not enough, ‘Mr. Quality Projects’ pushed his good governance policy with construction of three flyovers simultaneously.”
The State PDP Chairman further said the Governor has restored absolute peace in all 23 Local Government Areas of the State, adding that his favourable disposition towards non-indigenes has made the State home to all Nigerians.
While thanking the youths for their peaceful disposition, he called on them and others across the State to remain unwavering in their support for the Governor, noting that they can only do so by saying no to violence.
Meanwhile, in line with the promise of the Governor to execute as many people-oriented projects as possible, Governor Wike has ensured that the ongoing construction works on the final aspects of the Opobo section of the Ogoni-Andoni-Opobo-Nkoro Unity Road are at advanced stage.
Currently, construction work on the road is at the last portion that leads to Opobo Kingdom, even as the State Government had earlier completed a temporary road into the ancient kingdom for motorists to drive into the Island.
The contractor is expected to conclude the earthworks, stone-base and asphalt of the remaining parts of the Opobo Axis of the Unity Road.
Project Engineer for Raffoul Nigeria Limited, Tunde Taiwo said the Opobo Axis of the Ogoni-Andoni-Opobo-Nkoro Unity Road will be delivered by mid April 2020. He said construction work will be carried out in different aspects to complete the road.
A statement signed by the Special Assistant to the Rivers State Governor on Electronic Media, Simeon Nwakaudu, said ”the people of Opobo-Nkoro are happy that the all-important road project is progressing to conclusion.
“They praised the Rivers State Governor for connecting riverine communities to the mainland, saying that the investments of the Governor have improved the economy of Opobo-Nkoro and adjoining communities”.
Like last year’s Christmas, the people of Opobo used the temporary link of the road to travel to Opobo Kingdom.
According to the statement, the Andoni section of the Unity Road will also be delivered by August 2020. The project has been accommodated in the 2020 budget of the Rivers State Budget.
In another development, the Rivers State Governor, Chief Nyesom Wike has commended Senator Samuel Anyanwu for his political sportsmanship despite the political challenges he faced in 2019.
Speaking during a Thanksgiving Service in honour of the Senator, who is the immediate past Senator who represented Imo East Senatorial District in the 8th National Assembly (Senate), at Saint Columbus Catholic Parish, Amaimo, Ikeduru Local Government Area of Imo State yesterday, Governor Wike said Senator Anyanwu has had a successful political career.
He noted that despite eventually losing the PDP ticket to incumbent Governor Emeka Ihedioha, Senator Anyanwu has continued to remain faithful to the PDP.
“Senator Sam Anyanwu is a good politician. Despite losing the party’s Governorship ticket, he has remained faithful to the party”, he said.
Governor Wike noted his commitment to always thank God for his mercies, emphasizing that but for God he (Wike) would not have occupied the position of Governor.
He continued that his administration has always partnered the church in Rivers State; hence he will also assist the community church to expand the work of God.
Governor Wike recalled how he supported the Anglican Church in Imo State during their Synod, emphasizing that as a government; his administration will always be committed to supporting the gospel.
Also speaking, Former Senate President, Senator Bukola Saraki, said Senator Anyanwu is a man of distinguished character, who always stood for the truth.
“It is hard to speak the truth, but Sam is a man who always stand firm and speaks the truth for his people. As Chairman of Senate Committee on Ethics, Privileges and Public Petitions, he always stood firm. I have no doubt that Sam has a bright future, I will always support him”, he said.
In his remarks, Senator Anyanwu lauded friends and well wishers for identifying with him.
He particularly thanked Governor Wike, who he described as his friend and brother in Ikwerreland of Rivers State, who believed in making people, noting that the Governor has made him proud by always standing by his side.
“Governor Wike has made me proud. Though I failed my bid for the Governorship of Imo State and I’m no more in the Senate, but the Governor is still by my side”, he said.
The Thanksgiving Service attracted Former and Serving Federal Lawmakers.