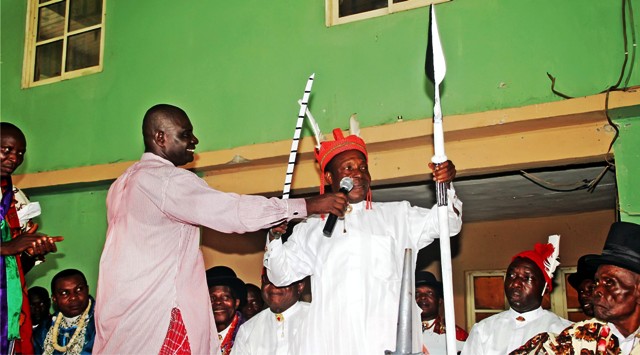 The Niger Delta Development Commission (NDDC) has promised to execute more development projects at the Federal University of Technology, Owerri (FUTO).
The NDDC Managing Director, Mr Nsima Ekere, made the pledge at the 30th convocation ceremony of FUTO, where he was given an honorary doctorate degree in Management Technology (D.M.Tech) honoris causa.
A statement by the NDDC Director, Corporate Affairs, Ibitoye Abosede, and made available to The Tide, yesterday, indicated that the NDDC Executive Director Projects, Engr Samuel Adjogbe was conferred with a PhD in Industrial and Production Engineering at the same event.
FUTO also awarded honorary doctorate degrees on the Chief Executive Officer of Orange Drugs Ltd, Sir Tony Ezenna, as well as the General Manager, Exploration, Esso Exploration Production Ltd., Engr Andrew Ejayeriese.
Speaking on behalf of the honorary doctorate degree awardees, the NDDC chief executive officer expressed gratitude to the Vice Chancellor and the Senate of FUTO for finding them fit and worthy to be honoured.
He declared: “We are indeed spurred and encouraged by this award and we will continue to dedicate our lives to excellence and professionalism in all that we do. We are also encouraged to continue to do our best to uphold the dignity of man and serve humanity.”
Ekere assured that the NDDC would not relent in its efforts to fast-track development in the Niger Delta region, stating that the commission had executed several projects in FUTO in the last one year.
According to him, “Several roads were completed within the university community for the benefit of both staff and students. And we are not done yet with the provision of facilities in the university. We shall continue to do more for FUTO.”
“We shall sit with the university authorities to find out the areas of need so that we can focus on those. Subject to the approval of the university, we intend to build another auditorium for the students. However, the final decision on this will depend on what projects the university authorities considered to be more pressing.”
Ekere said that he would not fail to appreciate excellence in the university.
Consequently, he declared that the best graduating student in the university, Miss Jane Adim, of the Department of Forestry and Wildlife Technology, would be awarded the NDDC post-graduate scholarship to study anywhere in the world and commended Adim for scoring 4.76 CGPA and blazing the trail for her fellow students.
Ekere affirmed: “This is the kind of student that we must encourage so that she will stand out as a beacon for others not just in the Niger Delta but in Nigeria at large. We are tired of youths being involved in militancy and causing a lot of problems for the oil communities and instigating instability in the region. I believe that if we support education properly, we can use it to fight cultism, militancy and unemployment in the Niger Delta region.”
In his address at the convocation ceremony, the Vice Chancellor of FUTO, Prof. Francis Eze decried the unfriendly attitude of the university host community, following the demolition of about 1.5km of its perimeter fence by persons suspected to be from the area.
He alleged that the host communities had been encroaching on the land belonging to the university.