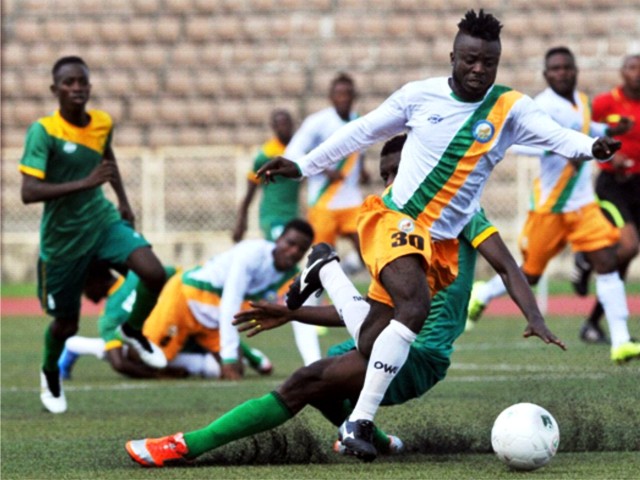 Go Round FC dropped points at home for the first time in more than one year as they were forced to a draw by Heartland.
The encounter at the Krisdera Hotel Stadium ended 1-1 after Julius Ubido equalised following a Chidi Nwachukwu goal that had put the home side ahead.
Heartland had not scored a goal in the league before this encounter while Go Round FC were confident that they had not dropped points at home since the loss to Remo Stars two seasons ago.
As early as the 11th minute, Chidi Nwachukwu headed home a sublime freekick taken by Morris Chukwu to put the home side ahead.
Five minutes before half time, Adelani Adeseun thought he had the second goal when he stole the ball from Heartland’s goalkeeper, Ebele Obi who had spilled the ball off a free kick, but the referee spotted an infringement and ruled out the goal.
In the 43rd minute, Lucky Emariojoke should have equalised when he found some loose space in the Go Round FC box and rattled the goalkeeper, Stanley Nwabali who needed two attempts to stop the ball from going in.
At the start of the second half, Shadrack Oghale replaced Adeseun Adelani and was pulled down a minute later when he stylishly went past Ikwugbado Kenneth.
The Heartland defender got a yellow card for his efforts.
But the game turned on its head in the 53rd minuet when Julius Ubido jumped highest to head home from a corner kick, giving his side its first league goal this season.
Chile Azu tried to score from outside the box in the 77th minute but his left footed strike went wide.
Three minutes later, Azu got a yellow card for pulling down Lucky Emariojoke.
Ugonna Ezenwata’s header was on target in added time from a Morris Chukwu cross but Ebele Obi parried for corner.
Chile Azu in an atttempt to score fouled Obi and was sent off for a second bookable offence in added time before the referee ended the game at 1-1.
Coach of Go Round FC, Ngozi Elechi thought his players underrated Heartland.
“Before this game we already spoke about not being over confident because of Heartland. They came out all out to play Akwa United and it was a solid performance.
“But over all I think there are areas my team did not do well by not keeping the ball on the ground,” Elechi said.
Ramsome Madu was proud of his boys for finally getting a result from Go Round Fc who he described as a side that had always beaten them.
“Sometimes some teams do not start well. We are among those teams that don’t start well but as the games progress we will progress.
“I’m happy with them because they stood their grounds against Go Round. You know they have been beating us. At least we thank God for getting a draw in today’s match,” Madu said.