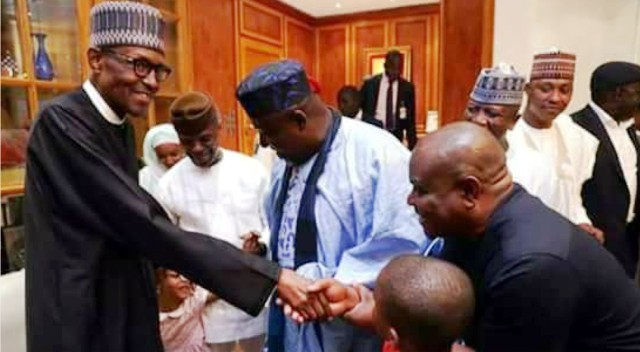 The Peoples Democratic Party (PDP) has taken a swipe at Vice President, Prof Yemi Osinbajo, who earlier in the week, said the current administration spent the sum of N1.3trillion on the execution of capital projects in 2016 alone.
In series of tweets on its official Twitter Handle @OfficialPDPNig., the party tasked the Vice President to explain to Nigerians how the said sum was spent and what projects were executed.
“We are alarmed and highly bewildered to hear from Vice President, Professor Yemi Osinbajo that N1.3trillion was spent on capital projects in 2016. N1.3 trillion on capital projects and nothing to show for it is unacceptable,” wrote the PDP in one of the tweets, asking: “Should we assume the Vice President was misquoted?”
The PDP further noted that since the assumption of Muhammadu Buhari as President, the APC has failed to deliver the dividends of democracy to the people.
“Apart from the infrastructures handed over to the APC-led government by the PDP, nothing has been done in the last two and a half years.
“We believe the Vice President, Professor Osinbajo will provide clarifications on how N1.3 trillion was spent on capital projects in 2016,” it wrote in yet another tweet.
Meanwhile, four out of the seven states that had their chapters of the PDP dissolved at the Special Non-elective convention held penultimate Saturday have already complied with the resolutions reached at the convention.
Chairman, National Caretaker Committee of the PDP, Senator Ahmed Makarfi stated this yesterday while addressing newsmen at a meeting with the Kwara State chapter of the party in Abuja.
Stating reasons for convening the meeting, Makarfi said Kwara cannot afford to be left behind while other states were already putting their houses in order in the interest of the larger PDP family.
“Kwara is the only state we are meeting like this. As I speak to you, we already have submissions from four states and they are ready to work together in the overall interest of the party. This means that they have already complied with the position of the party,” he stated, describing Kwara State as a “highly politically mature and active to prevent this type of isolation.”
On the progress so far made in Lagos, Osun, Ogun, Kwara, Borno, Kebbi and Adamawa States which had their Executive Committees’ dissolution ratified at the convention, Makarfi said states yet to find a common ground on the way forward had requested the NCC for more time, stressing however that in no distant time, all parallel factions would join hands together as one family to move the PDP forward.
“We are making big progress in compliance with the resolutions of the conventions. States are complying and making submissions. Some have asked for more time,” based on understanding, adding that there have been a lot of interests from many quarters to join the party after the convention.
He, however stressed the importance of putting the house in order as the party embarks on massive membership drive across the federation, adding that states that are yet to harmonise will do so after the Sallah break.
“It is good to expand but it is important to put the house in order before expansion,” he counselled.
On the delegation were prominent politicians including former Minister of National Planning, Professor Abubakar Sulaiman, Senators Solomon Ewuga, Simeon Ajibola and a host of others.

Wike, Man With Heart Of Gold – Banigo …Warns Against Encroachment On Disputed Lands