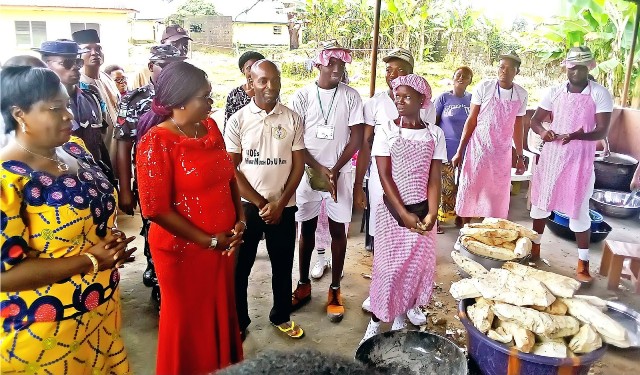 Rain flood has wrecked havoc in Egi land and its neighbouring Ahoada communities, following five days of heavy down pour which led to destruction of household property, livestocks, economic crops and buildings.
This has conpounded the devastating effects of cultists’ activities in the entire clans, as majority people who had left home on self-exile for safety of their lives would have more sad stories to tell
No zone is left out in the disaster, starting from Umu-Obor  communities of Oboburu, Ohali-Elu, Obigbo, and Obagi to Akabuka, Ogbogu, Obite and Ede in Etiti-Egi. The story is not different from Erema, Itu, Ibewa Obukegi in Ahiawhor zone with the cry of agony also coming from Obiyebe, Egita, Akabta and Obiosimini in Uso-Ozimini zone.
The Tide while going round the communities, witnessed serious cracks on the walls of mud houses, especially in Itu, Erema, Akabuka and Ogbogu, while those living in block houses were seen bailing water from their parlours and rooms.
A community leader and National Auditor two of Apex Egi socio-cultural organization, the Egi People’s Assembly (EPA), Chief Nathaniel Oriji, said the effect of the rain flood could be compared to that of natural flood of 2012.
“All we laboured to plant in our farms have all been destroyed. Our farms are like river, in few days time the food crops would all wither leading to another hungry season, which we have just survived”, and attributed the uncommon rain flood this year to blockage of natural water channels by oil companies.
The chairman of Itu-Ogba Community Development Committee,  Comrade Benard Obo, attributed the flooding of his community to a road constructed by the Niger Delta Development Commission (NDDC), which has no single drainage.
According to him, during the construction, the community had appealed to the contractors to include drainages but they told us we should approach NDDC because that was not included in their job specifications, but all our letters to the commission fell on deaf ears.
He,therefore, appealed to the new project director of NDDC to come to the aid of the community by constructing drains in the community’s section of the road.
The situation in Ahoada town, the headquarters of Ahoada East Local Government is as bad as that of Egi as most residents along Omoku road,Abuja Housing Estate, Odiemerenyi  and Ekpena roads have all evacuated while at Ula- Ehuda, the torrent from the community through the market was on high frequency.
Schools, hotels and churches were also not spared as people are now appealing to NEMA and the  state government to come to their rescue.
However, an environmental officer, and a town planner attached to Ahoada East Local Government council who pleaded anonymity said; “we are not authorized to speak to the press but the cause of the flooding is part of the climate change, we have been preaching”, the Town planner said “most developers ignored our advice against building along water routes, today they are reaping the reward of disobedience, especial those living in the Ahoada new sites.”