The Caretaker Committee
Chairman of Ogu/Bolo Local Government Area, Isaac Ibiberebupakabo, has donated N400,000 to the wives of the fallen heroes and promised to relate their demand for the payment of their pensions to Governor Nyesom Wike of Rivers State.
Ibiberebupakabo, who made the donation at the grand finale of the 2016 Armed Forces Remembrance Day Celebration at Ogu, headguarters of the Local Government on Friday also assured a monthly stipends of N100,000 to the legionnaires to run their office.
He also promised to provide them with new uniforms before the end of the month, saying the sacrifice of the fallen heroes and the legionnaires needed to be appreciated because of their love for the country.
“Let me inform the families of the fallen heroes and the people of Ogu/Bolo Local Government Area that they did not just willingly  die for the country, but for the love for Nigeria. So let us all remember and assist them especially the wives of the fallen heroes who are very important”, he said.
According to him, without them there will be no Ogu, Rivers State and Nigeria and he stressed the need to give them all the necessary assistance, and further assured that their request for job opportunities would be looked into.
Earlier, the chairman, Nigerian Legion, Ogu/Bolo Chapter, Col Emmanuel Aguru had appealed to the caretaker committee for assistance and congratulated him on his appointment.
Also speaking, the Head, Local Government Administration of the Area (HIGA). Comrade (Mrs) Gladys Nweye thanked God and everybody for a successful programme and also reiterated the need to remember the Legionnaries and the fallen heroes for laying down their lives for the unity of the country. 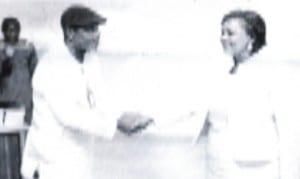