Mr Oshiomhole who contested the elections on the platform of the Action Congress of Nigeria (ACN) polled 477,478 votes to defeat the Peoples Democratic Party, PDP candidate, Major General Charles Airhiavbere who polled 144,235 votes, and the All Nigeria Peoples Party (ANPP) Candidate, Mr Ezebiri who got 3,642 votes.

Responding to news of his victory, Governor Oshiomhole, yesterday described President Goodluck Jonathan as a statesman and a man of honour.

Oshiomhole, who made the statement at a world press conference in Benin, attributed the peaceful conduct of the governorship election in Edo on Saturday to Jonathan’s determination to enthrone credible democracy in Nigeria.

“ I want to appreciate Mr President with his resolve and public pronouncement that he would provide adequate security for the people and the INEC staff before, during and after the election.

“I am glad that Mr President kept to his words of assurance that there would be no thuggery, hooliganism and violence during the Edo Governorship Election.

He said that the president had led by example, which is the hall mark of a statesman.

“He is indeed a statesman, a man of honour because there was adequate and effective presence of security agents on ground.

“I am impressed because the army actually played a neutral role .in the election,’’ he said.

On his victory at the polls, he congratulated his six opponents, saying he was willing to collaborate with them with a view to moving the state to a higher and better level.

He thanked the traditional institution, especially the palace of the Oba of Benin.

The governor said that “his majesty has shown and demonstrated true leadership qualities’’ since his assumption of office during his first term.

He assured the people of the state of his continued development stride, describing their massive turnout at the poll as a testimony that there was a need for the people to rise above ethnic politics.

“We are all Edo people and should live and think alike if we have to bring rapid development to our people rather than dissipate our energies over frivolities such as ethnic politics,’’ he said.

In a statement issued by the Special Adviser to the President on Media and Publicity, Dr Reuben Abati, Jonathan commended INEC and the security services for ensuring that the election was free and fair.

He said that the successful conduct of the election was in line with his administration’s commitment to continually strengthen democracy through the establishment of a more credible electoral system.

The President urged Oshiomhole to receive the fresh mandate as an endorsement of his outstanding performance in his first term, and see his re-election as an expression of the desire of the Edo people for “the continuation of focused, purposeful and dynamic leadership’’.

In his reaction, the Senate President, David Mark, also congratulated Mr Adams Oshiomhole on his re-election as governor of Edo, saying the victory was a reward for service to the people.

“This re-election is a reward for service. It must serve as an elixir for greater performance. You must continue to make service to your people the focal point of your administration.”

In a statement in Abuja signed by his Special Adviser on Media and Publicity, Kola Ologbondiyan, Mark advised Oshiomhole to continue to serve the people diligently.

He urged the governor to be magnanimous in victory and implored him and other contestants to join hands to build a new Edo in the overall interest of the people.

The Senate President commended INEC, security agencies and the people of the state for the peaceful conduct of the election.

He commiserated with the government and people of the state over the Ologbo boat mishap which claimed some lives in the cause of the election on Saturday.

Also speaking, the Speaker of the House of Representatives, Alhaji Aminu Tambuwal, congratulated Governor Adams Oshiomhole of Edo on his re-election.

In a statement issued in Abuja by his Special Adviser on Media and Public Affairs, Malam Imam Imam, Tambuwal said Oshiomhole’s victory was a manifestation of the people’s trust and confidence in his leadership.

He implored Oshiomhole to rise above partisan consideration and carry along all the people in the task of building the state.

The speaker also advised the governor to see the fresh mandate given to him, as a call to “further duty in the service of his fatherland’’.

He urged the losers in the election to accept the result in good fate and cooperate with the winner in the interest of the people.

“Any decision to challenge the outcome should be limited to the confines of the law,’’ he said.

Tambuwal reiterated the commitment of the House to work with the governor and other persons and interest groups to deepen democracy in the country. 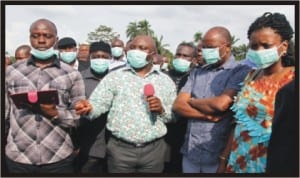