The Rivers State Government has approved the sum of N3 billion for the payment of arrears of gratuities owed retirees from the state Public Service.
The Head of Service, Mrs Esther Anucha who disclosed this while declaring open one-day South-South, South-East Zonal Conference of the Nigeria Union of Pensioners (NUP), held at the conference hall of the Ministry of Justice yesterday said plans have reached advanced stage to ensure that retirees got their cheques as they proceed on retirement.
Mrs Anucha also hinted that towards ensuring that pensioners with federal share of pensions got paid on time the state government had provided office accommodation and state secretariat complex, to facilitate the processing of documents.
According to her, following the signing into law of the contributory pension scheme in Rivers State last year by Governor Chibuike Rotimi Amaechi, measures have been put in place to ensure the smooth take-off of the scheme, one of such measures, she said was the setting up of the state Pension Board to supervise, regulate and control pension administration in the state.
The Head of Service noted that with the appointment and inauguration of the Board members, delays in computation and payment of pensions and gratuities would be eliminated.
Mrs Anucha, who was represented by the Permanent Secretary, Ministry of Establishment, Mr Gift Chima Ake said the introduction of the contributory pension scheme would no doubt douse the fears of prospective retirees.
Also speaking, the guest of honour and King of Abua Kingdom, HRM Kale Ogbuke harped on the harmonisation of pension and gratuities benefits in line with what obtains in the federal government service and enjoined all members to work assiduously as they are entitled to enjoy the fruit of their labour. He used the occasion to advise pensioners to engage in other businesses rather than depending on their retirement benefits in order to reduce the tedium of life at retirement.
Earlier, the state caretaker committee chairman of Nigeria Union of Pensioners, Hon. Alvan Azunda Ikegwuru thanked Governor Amaechi for establishing the state Pensions Board.

Re-inventing The EFCC For Results 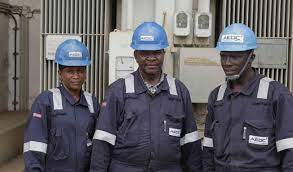 President Muhammadu Buhari has sacked the management of the Abuja Electricity Distribution Company (AEDC) following the strike action of the union of electricity employees which caused black out in the Federal Capital Territory (FCT), Abuja.
The sack was made known, yesterday, in a statement issued by the Media aide to the Minister of state for Power, Goddy Jedy Agba, one Ofem Uket.
The statement said that the president has directed the Bureau of Public Enterprises (BPE) to set up a new management team for the AEDC
It called on the electricity workers to suspend the strike, saying that outstanding emoluments and entitlements of staff will be paid within 21 days.
The union had, last Monday morning, embarked on strike shutting down operations of the Abuja Electricity Distribution Company (AEDC), resulting in blackout in most parts of the Federal Capital Territory (FCT), Abuja and neighbouring states.
Part of the union’s grievance was the failure of the AEDC management to remit the pension contributions of its members for 20 months. 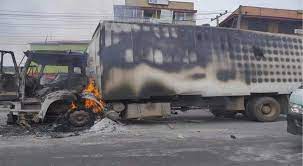 Tragedy struck, yesterday afternoon at Grammar School Bus Stop, Along Ogba-ojodu Berger Road, Lagos, when a white delivery truck, allegedly chased by officials of Lagos State Traffic Management Agency (LASTMA) rammed into school children returning back from school killing seventeen in the process.
It was learnt that the school children who are pupils from grammar school, were coming back from school when the truck driver who was attempting to escape from the officials rammed into them.
According to an eyewitness account, immediately after the accident happened, the truck driver, ran away but was caught at Ogba very close to Excellence Hotel, where it was set ablaze by irate commuters.
According to Cynthia, a student, who witnessed the accident, “the sight is something else, the kids were crushed, the accident happened immediately the school opened their school gate after the close of school. I am not sure about the number, as at when I left they said 17 children were confirmed dead.” 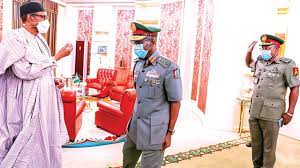 President Muhammadu Buhari has said that intelligence gathering and synergy among security agencies are major catalysts in winning the war against terrorism and other security challenges in the country.
The president stated this while declaring open the Chief of Army Staff (COAS) Annual Conference 2021, held at the Army Headquarters Command Officers’ Mess 1, Asokoro Abuja.
He charged the military to do more in information gathering to comprehensively defeat all forms of security challenges in the country.
The president, who was represented by the Chief of Defence Staff (CDS), General Lucky Irabor, acknowledged the successes so far achieved by Nigerian Army (NA) and other security agencies in the North-East and other theatres of operations across the country, noting that the Army is a key element of national power and diplomacy.
Buhari, who commended the COAS for his sterling and exemplary leadership of the Army, also expressed satisfaction in the progressive restructuring of the NA to a value oriented professional Army, adding that the invigoration will enable the NA function more efficiently.
The president maintained that for democracy to thrive, there must be adequate security of lives and property, stating that his administration is doing its best to equip the Armed Forces to optimally perform its constitutional roles.
He charged the NA to remain apolitical and continue to operate within the framework of the principles of fundamental human rights and strict adherence to rules of engagement in its operations.
Buhari assured the Armed Forces and all security agencies of adequate and prompt provision for their welfare and entitlements.
In his remarks at the conference, the Minister of Defence, Maj-Gen Bashir Magashi (rtd) represented by the Director, Army in the Ministry, Mr Sunday Attah, appreciated the president for his unflinching support for ongoing operations across the country, assuring that all resources will be judiciously utilised.
He expressed optimism that decisions taken during the conference will generate new strategies for enhancing security and assist in charting a better course for the NA in 2022.
Earlier in his welcome address, the Chief of Army Staff, Lt.-Gen. Faruk Yahaya, stated that the conference is an annual event of the NA, in line with his vision to have a “Professional Nigerian Army, ready to accomplish all Assigned Mission, within a Joint Environment in Defence of Nigeria”.
Yahaya pointed out that year 2021 was full of activities for the NA, adding that the NA was confronted with enormous security challenges across the country and vowed that the NA will not relent in its efforts to root out terrorism, banditry and other crimes in the country.
He added that the conference will provide opportunity to evaluate efforts on ongoing operations, towards achieving overall national defence and security objectives and chart the way forward for better performance in the year 2022 and beyond.
He explained that 2021 COAS Annual Conference comes with two features, viz., indigenous research and development exhibition and valedictory dinner in honour of retiring personnel of the NA, to appreciate them for their sacrifices and meritorious service to the nation.
A major highlight of the conference was the Research and Development Exhibition organised by the Department of Army Transformation and Innovation (DATI).
Dignitaries, who graced the occasion, include former Defence and Army Chiefs, members of the National Assembly, service chiefs, Inspector General of Police, heads of security and paramilitary agencies, top brass of the NA, National President Nigerian Army Officers’ Wives Association, (NAOWA), principal staff officers from Defence and Services Headquarters.