The Rivers State Government has faulted the decision of the Revenue Mobilisation, Allocation and Fiscal Commission (RMAFC) over the ceding of some of its oil wells to Akwa-Ibom State.

Making public the position of the state government in a radio phone-in programme organised by Silverbird Communications over the weekend, Commissioner for Justice and Attorney-General of Rivers State, Barrister Ken Chikere noted that the RMAFC went beyond its constitutional mandate by taking decision in a matter meant for the National Boundary Commission.

He maintained that the determination of boundaries was the core mandate of the National Boundary Commission, adding that the RMAFC would not have ceded the oil wells without the decision of NBC. The Rivers State Attorney-General observed that before the matter was taken to court, former President Olusegun Obasanjo had brokered a political solution which RMAFC jettisoned.

Wondering why RMAFC abandoned Obasanjo’s mediation, Bar Chikere submitted that political solution was one way the matter would have been solved, stressing that Rivers State would want justice to prevail.

He averred that the relationship between the states involved has been soured because of the acrimony and claims made by them over  the ownership of the oil wells.

His words: ‘This acrimony is not healthy for peace among Niger Delta States. There is so much acrimony…The issue of oil well is tearing them apart”.

The Rivers State Commissioner for Justice debunked claims in some quarters that the state may refund about N53billion, noting that such claim was unsubstantiated.

Commenting on whether actually Rivers State had claims over the oil wells before they were ceded, the commissioner asserted that based on historical origins and international procedure for determining boundaries, the wells were owned by the state even before states creation.

He, therefore, called on concerned indigenes who can provide assistance to the state government in pursuing the matter, since it affect the economic and social life of the state.

Recently, Rivers State went to the Supreme Court over the ceding of 208 oil wells to Akwa Ibom by the Revenue Mobilization, Allocation and Fiscal Commission after the Federal High Court threw away the matter based on lack of jurisdiction. 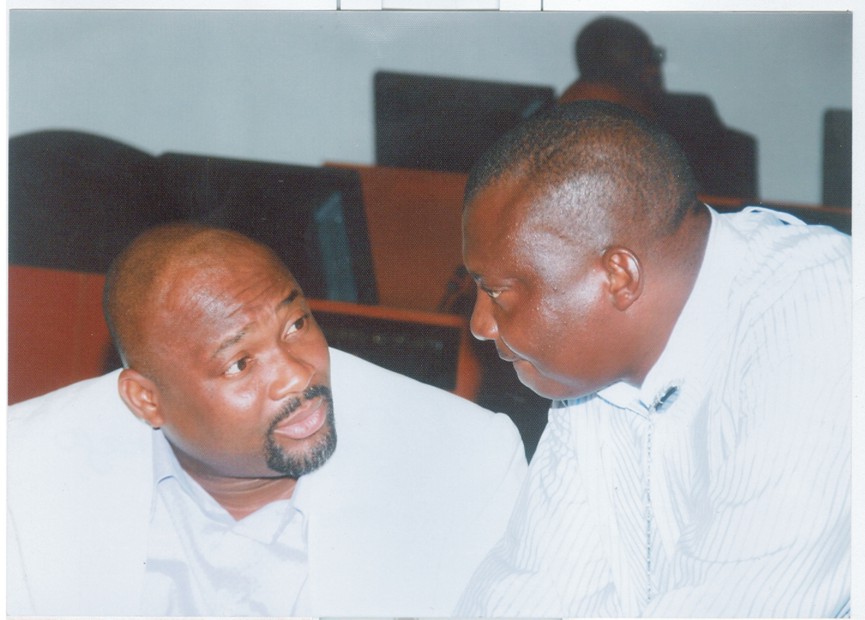 Deputy Speaker, Rivers State House of Assembly, Hon Dumnamene Deekor (right) conferring with the leader of the House, Hon Chidi Lloyd during a sitting of the House,last Thursday.