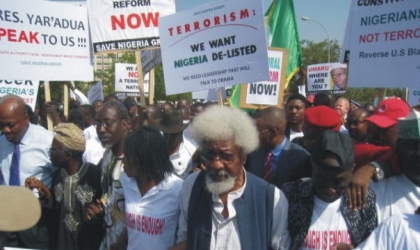 Noble Laureate, Professor Wole Soyinka (middle) leading others to protest the absence of President Umaru Musa Yar’Adua and his inability to handover to Vice President Goodluck Jonathan, yesterday, in Abuja

Speculations over the health situation of President Umaru Musa Yar’Adua may come to an end as the president spoke encouraging words to Nigerians from Saudi Arabia.

In his first interview since November when he left the country for heart treatment, Yar’Adua told the BBC, yesterday, that  he was recovering and hoped to make “tremendous progress” which would enable him to return home and  resume duty.

Nigerian opposition parties had continually asked about the true state of Mr Yar’Adua’s health. The president’s absence has generated a lot of concern. A rally was called for Tuesday, mainly to protest over his absence. There are three different court cases underway calling for power to be transferred to the Vice-President, Goodluck Jonathan. Mr Yar’Adua is also known to have kidney problems.

Speaking by telephone, Mr Yar’Adua said he was making a good recovery..

“At the moment I am undergoing treatment, and I’m getting better from the treatment. I hope that very soon there will be tremendous progress, which will allow me to get back home,” he said.

Rumours had been rife that he was critically ill and unable to return to the presidency.

Under the banner Enough Is Enough, an organisation called the Save Nigeria Group called people onto the streets of the capital, Abuja.

There is a perceived danger of a power vacuum in a country which only saw the back of military rule just over 10 years ago.

The opposition plan is to march to the national assembly where senators are expected to be discussing the president’s health.

Nigerians may be worried about their absent president but whether their action will be strong enough to make any difference is yet to be seen.

It would be recalled that rumours were rife in the country last Monday that President Yar’Adua was dead. Special Adviser to the president on media and publicity, Olusegun Adeniyi had in reaction to the rumour asked the public to discountenance the story, insisting that the president was not only alive but very conscious and getting better.

Meanwhile, the Nigerian Senate has resolved to invite the Secretary to the Government of the Federation (SGF) to brief the distinguished house on the state of health of President Umaru Musa Yar’Adua.

The resolution came on the heels of the adoption of a motion sponsored by Deputy Senate President, Senator Ike Ekweremadu and 33 other senators expressing worry over the wide spread anxiety following the long absence of Mr. President.

Though Sen. Garba Lado (PDP-Katsina) made an attempt to stop the Senate from discussing the issue raising order 3 (5) of the Senate standing rules to the effect that the Senate could not discuss the issue because the matter was in court, he was over ruled by the Senate President after many Senators rejected his line of view on the note that the motion was just a harmless one.

According to Sen Chukwumerije“All we are doing is finding out the true state of health of the President”.

Presenting the motion, Senator Ekweremmadu noted that the President had been out of the country for about seven weeks on ground of ill health.

“While the Senate was on the Christmas and New Year recess, the anxiety of Nigerians over the absence of the President assumed worrisome dimensions as expressed in several media across the country.

“Worried that in the midst of all these there is no authoritative and authentic information on the true state of affairs regarding the health of the President,” he said.

The Deputy Senate President also expressed concern that since his long absence, there had been no formal communication to the National Assembly pursuant to Section 145 of the 1999 Constitution which would empower the Vice President to act and perform the functions of the President.

He therefore commended the Vice President, Dr Goodluck Jonathan, GCON on his effort to carry on the affairs of the country in the absence of the President.

He continued“Whilst conceding that the President is entitled to attend to his health no matter how long that may take, we note that there is need for the Senate to be certain of the true state of affairs to enable her take appropriate action as the entire country now looks up to it for direction,”

Senators who contributed to the debate noted that every Nigerian had a right to know the health condition of the President.

They called for the amendment to Section 145 of the constitution which made it optional for the President to transmit a letter to the National Assembly on his absence.

Sen. Joy Emodi recommended that the ongoing constitutional amendment shall look seriously into amending Section 145 of the constitution.

Th senate however did not buy the prayers of the sponsors of the motion asking the senate to send a delegation to Saudi Arabia to ascertain the situation and report back to it within one week.

Sen. Nuhu Aliyu (PDP-Niger) said that the President should speak to Nigerians through a local media to allay their fears.

His words“My fear is that even if we send senators to Saudi Arabia, how are we sure that they are going to see him?.

“Let FEC that has the constitutional power to look into the health of the President go and see him,” .

Briefing Senate correspondents, Chairman, Senate Committee on Information and Media, Sen. Ayogu Eze, berated the NTA for failure to grant a live coverage to the Senate debate on the President’s health adding that the Senate would conduct an investigation into what happened, adding that it was done in bad taste.

At the House of representatives a similar motion was debated and the Federal Executive Council was urged to formally communicate the House on the Situation to enable the house take necessary actions.