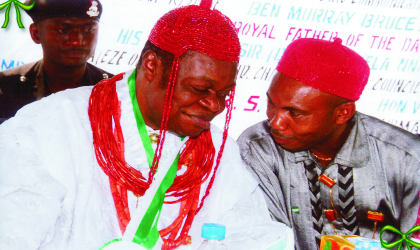 The Rivers State Government has renewed its commitment towards ensuring that all communities in the state were electrified before the end of the tenure of the Amaechi administration.

The state governor, Rt. Hon. Chibuike Rotimi Amaechi gave the assurance Wednesday while declaring open a two day International Power Roundtable and Exhibition organised by the State House of Assembly in conjunction with the Federal Ministry of Power, and the State Power Ministry held at the main auditorium of the State House of Assembly Complex, Port Harcourt, with the theme “Maximize Investment Opportunities in Power Projects in Nigeria Through Public-Private Partnership.”

Governor Amaechi, represented by the Speaker of the State Assembly, Rt. Hon Tonye Harry said that power generation has become the cornerstone of this administration in view of the drive toward the development and transformation of the state.

He explained that the present administration decided to continue with all the power projects initiated by the last administration in order to provide electricity to all communities for development purposes.

The state chief executive noted that the state is most serious in power generation across the country adding that the inflation currently being experienced in the country was caused by instability of power supply and described power as the live-wire of every sector in the economy.

“Power generation is a key component of the present administration’s development plan. This is because all sectors of the economy require power to succeed. Power is the main cause of our economic problems in the country,” he declared.

The state governor further explained that the state PPPI law was enacted to protect business investments and urged people to invest in the state as their businesses would be protected.

He thanked the organizers of the programme for complementing government efforts in the area of power generation adding that the success of the conference would help the state government plan its power project policies.

In his speech, the State Commissioner for Power, Hon. Augustine Nwokocha stated that the state government’s drive towards increased power supply in the state would not be compromised adding that such decision underscored government commitment to generate 250 megawatts of electricity to the state before the end of the 2010 and urged the private sector to support government initiative.

He disclosed that due to the law on distribution and generation of power in the country, the state government was constrained to distribute power after generation.

The commissioner however hinted that the state government was working in tandem with other state governments within the South-South region to ensure that the problem of power shortage is addressed.

Also speaking, the chairman of the occasion, Engr Odieari Oruye, thanked the State House of Assembly for organising the event and described power as a necessity to human life.

In his address of welcome, the Chairman, Rivers State House of Assembly Committee on Power, Hon Henry Ogiri said that the aim of the Roundtable was to address the epileptic power supply in the country adding that the situation has adversely affected the development of the nation.