The abductors of Pa Simeon Soludo have scaled down their ransom from N500 million to N300 million with a warning that “the worst” may befall him if their demand was not met immediately.

Pa Soludo, 78, father of the immediate past Governor of the Central Bank (CBN), Professor Chukwuma Soludo was abducted from his residence at Isu-Anioma, Aguata Local Government Area of Anambra State on Tuesday as he was about taking his dinner.

Pastor Ugochukwu Soludo, a son of the kidnap victim said the latest demand was made yesterday while the abductors threatened to visit the worst on the old man if their demand was not met immediately.

Pastor Soludo faulted a report credited to the police that the family had not made a formal report on the kidnap. According to him, their eldest brother, Emmanuel, made a formal report the same day their father was kidnapped at the Ekwulobia Police Station in Aguata Local Government Area.

“The following morning, which was Wednesday, the police visited our home where Emmanuel and everybody that needed to be interviewed were interviewed and it was done in writing by the police team.

The issue that a formal report has not been made to the police is not true,” he said. Ugochukwu said though the family was worried about the safety and health of their father and want his immediate rescue, it was ridiculous that the family was made to engage in negotiations for the life of a 78 year-old man who did not commit any crime.

Their father, he said, is required to  refix his artificial eye every three days. He expressed fear that his condition might have worsened in the last five days of his abduction. He also regretted that politicians were trivializing their father’s kidnap, adding that there was no way the family could have kidnapped him as some politicians insinuated.

Meanwhile, the South East Zonal Working Committee (ZWC) of the Peoples Democratic Party (PDP) has expressed concern over the verbal war between the gubernatorial candidate of the party in Anambra State for next year’s election, Prof Chukwuma Soludo and a member of the party’s Board of Trustees, Chief Chris Uba, saying the development is not in the interest of the party.

The ZWC has, therefore, directed all the combatants to lay down their arms and channel their grievances to the National Working Committee (NWC) instead of ridiculing the party in the media.

Soludo, former Central Bank Governor and Uba, have lately been locked in a war of words following the kidnap of Pa Simeon Soludo which the former governor of CBN accused those opposed to his candidature as being the mastermind.

On the other hand Uba denied the allegation and declared that on no account would he accept Soludo as the candidate of the party in the state because, according to him, he (Soludo) has no stake in the party.

National Vice Chairman of the PDP in the South-East, Chief Olisa Metu who spoke on the development in Enugu, yesterday, said though the zonal party structure was constitutionally bound to support the candidature of Soludo being the candidate selected by the party’s NWC, it would no longer tolerate “the ongoing media war between the two leaders of the party.”

“The South east PDP is worried by the spate of accusations and counter accusations being carried out by major stakeholders of the party in Anambra in the media.

Accordingly, we are directing those involved to stop further media attacks. Henceforth, all further remarks and opinions on the situation in the state should be channelled to the state party in Anambra or to the NWC instead of ridiculing the party in the media,” Metu stated.

The party noted that such media attacks were capable of overheating the already charged political atmosphere in Anambra preparatory for the February 6 governorship election and, therefore, warned that further media remarks by the people involved would be meted with severe sanctions.

“We don’t want chaos and for the avoidance of doubt, for now there remains a recognised party by the NWC in Anambra State, nobody should further comment on the situation in Anambra.

What we believe in the PDP is that in as much as we have our own opinions on the situation in the state, we must abide by any decision taken by the NWC of the party in interest of the party and the people of the state.

“Anyone we are opposed to should be taken to the NWC not to the press; NWC will subsequently take it to the National Executive Committee. PDP is a responsible party and we expect our members to be equally responsible in their conducts especially as we prepare for the forthcoming election in the state,” Metu said.

Speaking further on the candidature of the former CBN governor, the PDP national vice chairman said that the party in the south east was constitutionally bound to give maximum support to the decision of the National Working Committee on Soludo, adding, therefore, that anybody who was opposed to that decision should follow the proper procedure to express his grievances instead of resorting to the media.

“We’ve ordered all parties to cease further media attacks; the party will not tolerate any violation of this order as it would be visited with severe sanctions. As a party, we’ve shown enough magnanimity and would no longer fold our hands and watch it to continue. They are making a mockery of the party by such action,” he said. 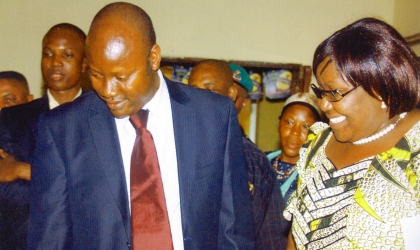