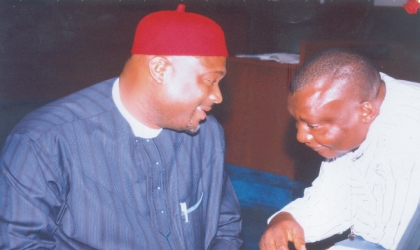 Deputy Speaker Rivers State House of Assembly, Hon Dumamene Deekor (right) listening to the leader of the House, Hon Chidi Lloyd at a sitting of the House, last week.

The National Executive Council (NEC) of the Academic Staff Union of Universities (ASUU) is to meet on Tuesday to take a decision on the latest agreement reached with the federal government in a bid to end the over three months strike.

ASUU president, Prof Okachukwu Awuzie made this known while addressing the press after meeting with the Minister of Education, Dr Sam Egwu and the Edo State Governor, Adams Oshiomole on the matter.

The Edo state Governor had expressed optimism that the university lecturers would return to work soonest, adding that both parties have made confessions.

Dr Sam Egwu, the Minister of Education has also commended the efforts of the Edo State Governor, Adams Oshiomole and the Nigerian Labour Congress (NLC) for their intervention.

The minister however, assured that the industrial dispute between the federal government and ASUU will be permanently resolved.

President Umaru Yar’Adua in his independence day anniversary broadcast to the nation had expressed concern over the  lingering industrial dispute between ASUU and the federal government .

The president, however posited that the disagreement between the two parties will end soon.

It would be recalled that in December 2006, the Federal Minister of Education inaugurated the FGN  and ASUU re-negotiation team, chaired by Mr Gamaliel Onosode with a single term of reference of renegotiating the 2001 federal government ASUU agreement.

The 2001 agreement dwelt on increased funding of the universities,  university autonomy and academic freedom, 70 years retirement age for academic staff, as well as salaries and condition of service.

The committee came up with a draft provisional agreement in January  this year, which both parties were to sign. The present administration which professes the rule of law however, said, in the spirit of autonomy, that university councils were the true employers  and that the discussion should continue at that level.

It also said its agreement with the union would not be binding on state governments. ASUU, however said that the renegotiation process which began in 2006 should be concluded.

It also argued that no council could afford to pay university staff. In one of his briefings since ASUU went on strike last June, the minister of Education said all the issues raised above, except salaries and condition of service, had been addressed by the federal government.

On funding, he said the federal government has not only increased budgetary allocation to the education sector and the quantum funds to its universities, it had also put in place various special interventions through the Education Trust Fund (ETF).

He added that the committee also agreed to increase the retirement age of academic staff from 65-70 years but only for those who attain the level of professor by the age.

In the course of the strike, the federal government announced a 40 per cent increase in salary for the lecturers but the union rejected this, saying it was a unilateral decision and not in the spirit of collective bargaining.

Govt Does Not Hate Ateke – SSG