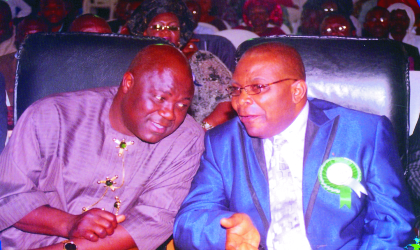 Edo State Governor, Adams Oshiomhole has called on European governments, to help in the fight against human trafficking by identifying the sponsors abroad and ensure that they are prosecuted.

Urging the youths of the state and the nation to resist the urge of traveling abroad illegally so as to avoid unwarranted deaths and humiliation, Oshiomhole stressed the need for the European governments to be proactive in the fight against human trafficking by making the market unattractive for the sponsors, fearing that the war may be difficult for the Federal government unless there is an international collaboration to it.

Oshiomhole spoke at the maiden campaign against human trafficking organized by the National Agency for the Prohibition of Traffic in Persons and other Related Matters (NAPTIP) in collaboration with the state government, in Benin City Friday.

Commending President Musa Yar’Adua on the fight against corruption, Governor Oshiomhole, asserted that “ I identified with the sentiment expressed by the Finland Ambassador, and we in Edo state recognizes that girls are supposed to be well trained by providing better opportunities for them to go to school.

We want to say that there should be an international war against those who are receiving the traffickers, because if the market is there the trade will continue to flourish.

“Fight against unemployment is a fight against trafficking. I believe that it is not a coincidence that as people become poorer and poorer, they think of strategies which may compound the problem of poverty. The poor believe very wrongly that life elsewhere is like heaven. They believe that traveling abroad is like migrating to heaven, but those of us who have traveled know that life is tough outside Nigeria.

In various capitals in Europe, I have seen people of various colours who are homeless. We are aware that there is poverty here, but there are challenges elsewhere. For us in Edo state, we are agreed with the sentiment expressed by the Executive Secretary of NAPTIP, that rhetoric alone cannot stop the incident of trafficking” he stated.

Oshiomhole added : “Government must take bold steps and it is included in the President Yar’Adua’s seven point agenda which is designed to revive the Nigeria economy, fight poverty and create jobs.