The chairman of Gokhana United Forum, Mr Belgeni Joseph Lenata has said that the present administration of Rt Hon. Chibuike Rotimi Amaechi needs peace to succeed in its endeavour to develop the state.

He thus urged communities, particularly in Ogoniland, to give peace a chance.

Mr Lenata, who said this during the second anniversary memorial of the return of peace to Te York Community in the Khana local government area, said that continuous friction among the people of Ogoniland will not bring the needed development to the area.

He also urged youths of the community to always seek the consent of their elder before taking any action.

“My message to the youth of Teyork are as follows they should embrace the administration of Rt Hon. Rotimi Amaechi, which has changed Rivers State, they should avoid cultism and anything like communal crisis should be eliminated, adding that “the only thing that moves a community forward is peace”.

Meanwhile, the people of Teyork community have protested the incessant arrest and detention of their members by the police.

In a protest march to the Bori Area Command of the police at the weekend, the people also demanded for more government protection, while employment opportunities should also be provided for youths in the area. 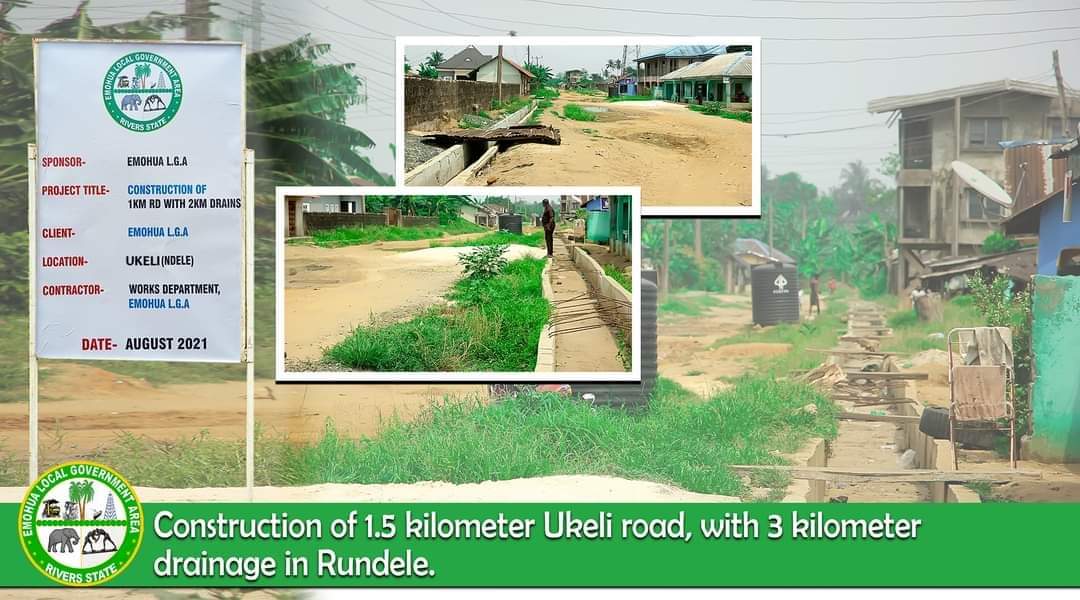 The Chairman of Emohua Local Government Council, Dr. Chidi Lloyd, has reiterated his commitment to quality project delivery across the local government, with the meager resources available to the council under his watch, but maintain that all the projects initiated by his administration cannot be completed at a time, considering the fact that the council’s only source of revenue has been the monthly allocation from the federation account.
The Chief Press Secretary to the council chairman, Bright Jossy-Elendu in a statement dispelled the rumoured abandonment of construction work at Ukeli Road, one of the four road projects being executed simultaneously across the local government by the administration, disclosing that the Local Government Council had already concluded necessary arrangements to remobilise to site the contractor handling the construction of the 1.5 kilometer Ukeli road with three kilometer drainage conceptualised by the administration in Rundele Community (Ward 7), immediately after the completion of Eveku Road in Eveku community (Ward 14) Odegu, Emohua LGA.
The statement however acknowledged the deliberate attention given to the construction of the one kilometer Eveku road which was actually flagged off before the Ukeli road project in Rundele, aimed at ensuring that the project was completed and delivered to the council for inauguration during the first one year anniversary celebration of the administration of the chairman, assuring that same attention would be given to Ukeli road immediately after the anniversary celebration, with a view to having the 1.5 kilometer road project in Rundele delivered in August, in line with the directive of the council chairman.
Jossy-Elendu berated naysayers and armchair critics of the council chairman for attempting to mislead the unsuspecting members of the public with fabricated information insinuating that the Ukeli Road project in Rundele which the council chairman conceived out of his own volition and love for the people of Rundele had been abandoned by the council, stressing that the council chairman cannot be dismayed by the mischievous propaganda peddled by those threatened by the unprecedented infrastructural revolution witnessed across the local government under his watch.
The statement described as ungrateful the activities of some cowards on social media who hide under pseudonym to cast aspersions on Dr Lloyd, amidst the council chairman’s unsolicited effort to improve the socioeconomic wellbeing of the people of Rundele with the construction of Ukeli road, a road that will be asphalted for the very first time since the community was founded, but reassured that Dr Lloyd came too prepared to be distracted by the machinations of his traducers.
The council chairman’s press secretary further reassured that Emohua Local Government under the effective leadership of Dr Lloyd will continue to prudently manage the slim resources available to the council for the provision of democratic dividends to the people of the area, while urging residents of the area to appreciate the council chairman’s developmental strides by providing the necessary support to contractors handling Local Government projects in their respective communities. 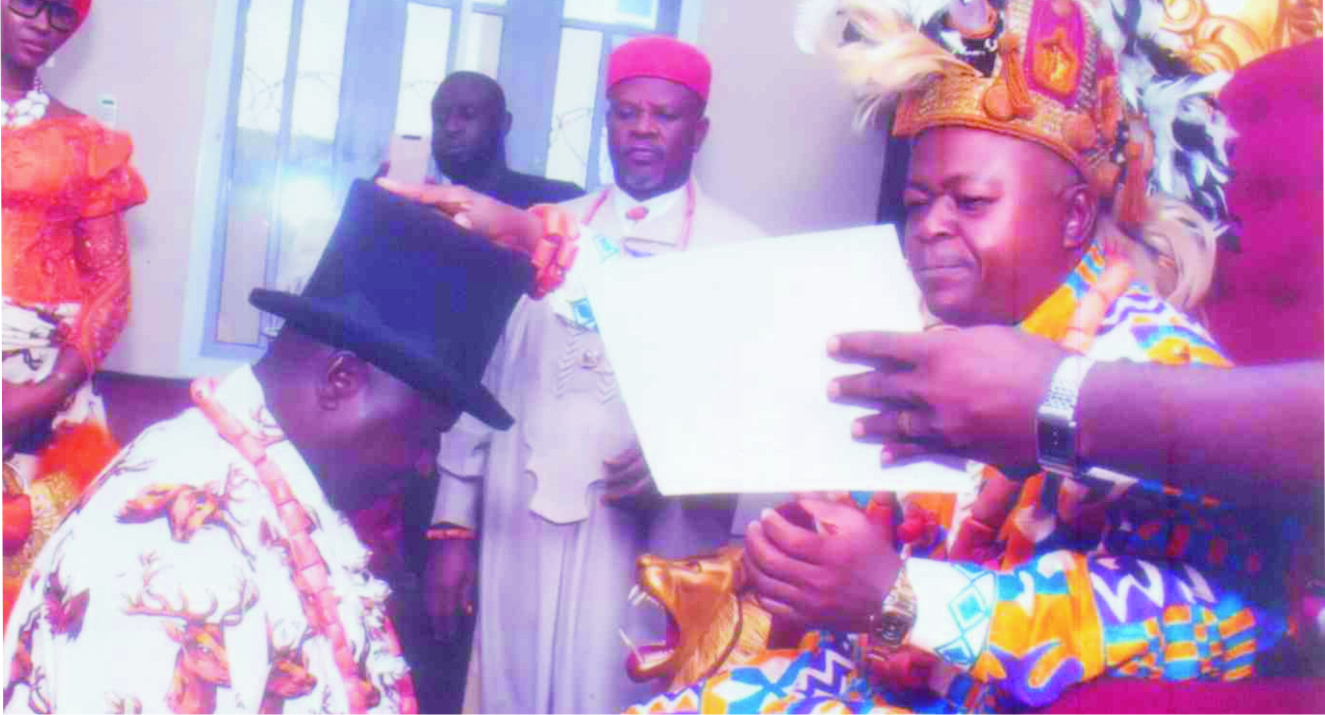 Paramount ruler of Woji Community in Obio/Akpor Local Government Area of Rivers State, Eze Emeka Ihunwo, says the community is now more united than before.
Ihunwo, who said this in an interview with newsmen during his seventh coronation anniversary celebration, also said his ambition is to see the community become the Dubai of Nigeria.
The monarch said because the people are now speaking with one voice, the community has continued to record tremendous achievements both in human and infrastructural development.
Accordingto him, despite challenges, the community has recorded some impressive achievements within the last seven years.
Emphasising that the unity in the community is more now, he said through the efforts of the palace, employment opportunities have been provided to both indigenes and non- indigenes.
He said a large chunk of scholarship programmes provided by private schools in the community were given to non-indigenes.
He listed some achievements to include the expansion of the community’s Town Hall, construction of roads, skills acquisition programmes for youths in the community, provision of grants for market women, as well as the empowerment of some members of the Woji Council of Chiefs.
Ihunwo particularly said the Woji Transport Company, which took off with a fleet of three Toyota Sienna vehicles, will help those that will operate them to find their “daily bread”.
He said the community has also witnessed increase in its electoral units from nine to 40.
The paramount ruler used the occasion to commend Governor Nyesom Wike for the level of infrastructural development in the community.
He listed some of the projects to include the Oginigba Woji Bridge, which was reconstructed by the present administration, the ongoing Woji Alesa Road, and several road projects in the community.
The monarch also commended the lawmaker representating Obio/Akpor Constitutuency in the National Assembly, Hon. Kingsley Chinda, for what he called his effective representation of the people of Woji.
Noting that his ambition is to see the community become the Dubai of Nigeria, he said all the features that made Dubai what it is today are present in Woji.
He therefore called on Nigerians who invested in Dubai to come to Woji and do same.

In a bid to make the nation’s waterways safe and navigable, Nigerian Inland Waterways Authority (NIWA) has promised to make 10,000km-waterways navigable yearly.
Towards this end, Nigeria has signed an Exchange of Note (E/N) with the Japanese Government for an Economic and Social Development Programme involving the acquisition of a high-speed boat to reinforce services for coastal security in Nigeria,
Minister of State, Ministry of Budget and National Planning, Prince Clem Agba, signed on behalf of Nigeria, while the Ambassador Extraordinary and Plenipotentiary of Japan to Nigeria, Kazuyoshi Matsunaga, signed on behalf of the Japanese Government.
Prince Agba noted that the procurement of the high-speed boat worth $2.78 million dollars, would greatly enhance the operations of the Deep Blue project.
He lauded the Japanese government for their interest and interventions in Nigeria for Economic development.
“This project to strengthen the operations of the Nigeria Maritime Administration and Safety Agency (NIMASA), will definitely strengthen the partnership between the Government of Japan and the Federal Republic of Nigeria.
“Nigeria also appreciates the recent exchange of notes we signed for Emergency Improvement of Electricity Supply Facilities in Abuja, and the role Japan played in the development of the National Power Development Master-Plan designed to guide the Government on the optimal energy mix and efficiency for Nigeria”, Agba said.
Speaking at the event, Director-General, NIMASA, Dr. Bashir Jamoh, assured the Japanese Government that the Agency, working with relevant stakeholders, will ensure the sustainability of the recent success in the war against piracy in Nigerian waters and the Gulf of Guinea (GOG).
“This high-speed boat is a welcome addition to our growing arsenal of platforms and assets to reinforce service for coastal security, not only in Nigeria but also in the Gulf of Guinea, as over 60% of shipping activities in the region pass through Nigerian waters.
“This vessel will be incorporated into the Deep Blue project which already has 2 special Mission Vessels; 2 Special Mission Aircrafts; 3 Special Mission Helicopters; 10 Unmanned Air Systems and vehicles; 17 fasts moving interceptor boats; 16 armoured vehicles and the C4i Centre”, he said.
Earlier, the Japanese Ambassador noted that the project is to support the measures adopted by the Nigerian Government to deal with the threat of the blue economy, to prevent and suppress piracy, armed robbery, and any other unlawful acts against ships in Nigerian waters.
“In the Gulf of Guinea, as you know, the piracy problem is hindering the economic development of the coastal areas.
“A slowdown in economic development impoverishes the coastal population, forcing some of them into piracy for their livelihood. We need to break this vicious cycles.
“Economic and Social Development is one of the guiding principles of the Tokyo International Conference on African Development, TICAD.
“The people and Government of Japan hope this project will enable NIMASA to reinforce their operations and services for coastal security in Nigeria, strengthen Nigeria’s counter-piracy efforts and prove useful for the security of the Gulf of Guinea”, he concluded..