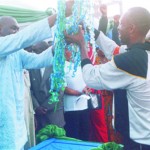 Secretary to the Rivers State Government, Hon Magnus Abe (left) who represented the state governor, presenting a trophy to the winning team captain of the Ministry of Commerce, winners of football competition organised by the Head of Service to mark the 2009 Civil Service Week, at Liberation Stadium, Elekahia, Port Harcourt, yesterday

Nigeria coach Shuaibu Amodu cut into his players’ dressing room celebrations after last weekend’s 0-0 draw by warning them that the job was not yet done.
Amodu’s Eagles played out a stifling evens with Tunisia at the November 7 Stadium in Rades, but as the players high-fived in the dressing room, Amodu was quick to remind them that the champagne must stay on ice, at least until September 6.
“Boys; you have come out of here with a draw but I want you to know that it is not yet time for celebration. You must go back to your clubs and start reflecting hard on the fact that we must beat the Tunisians in Abuja, and know that we have not won that match until it is played,” Amodu told his players.
Amodu however expressed his confidence in their ability to claim the ticket, as long as they keep their focus.
“It is not yet uhuru. We must have no illusions. Nigeria will qualify for the 2010 World Cup finals on the strength of this performance, but the truth is that we are not there yet.”
Amodu’s words appeared to have sunk in, as skipper Nwakwo Kanu echoed the manager’s words.
“We got a result here but it is very important that we all remain focused on September because we have to win. Everyone must be determined to win.”
Meanwhile, Flying Eagles coach Samson Siasia has backed Shuaibu Amodu’s tactical deployment which earned the Super Eagles a 0-0 draw against Tunisia in their decisive 2010 World Cup qualifier on Saturday at Rades.
Amodu’s team stifled the Tunisians for long periods before taking control of the game in the closing stages, as the hosts legs began to give way. And they could have won it if Esperance striker Michael Eneramo had put away a gilt-edged opportunity late in the game.
“I liked the way Amodu played. I would have played the same system too.
“The back four looked very solid. I like the way the four defenders at the back played like a unit and they were very strong which actually helped in curbing the forays of the Tunisians,” Siasia said.
He added a caveat however, which focused on John Mikel Obi’s deep-lying role, urging the Chelsea midfielder to take on more offensive responsibilities in order to assist the team in creating more goal scoring opportunities.
“The only problem was that Mikel has to move up a little bit more and support the three strikers up front. Besides that, I think they had a good game away to Tunisia.
“The players did their best in the match and did well by salvaging at least a point. But the grey area in the team is that we didn’t create a lot of chances in the game which is very important for scoring goals in any match,” Siasia told our source in Abuja on Sunday.
He went on to make the bold prediction that Nigeria would be in South Africa for the World Cup as long as the Eagles keep their focus and win their remaining three matches.