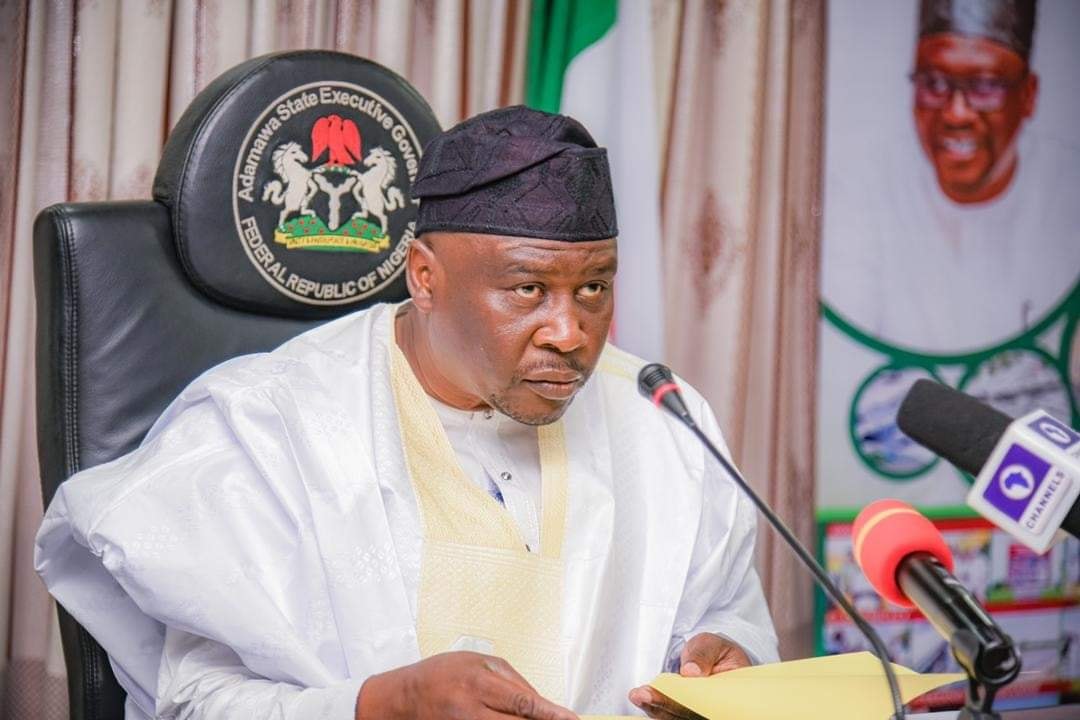 The PDP NEC, yesterday, appointed the Governor of Adamawa State, Hon. Ahmadu Umaru Fintiri, as the chairman of the party national convention scheduled for October 30, Governor of Bayelsa State, Senator Douye Diri, his deputy while Oyo State Governor, Engr. Seyi Makinde, is to serve as secretary.
The party’s NEC has also appointed the Enugu State Governor, Hon. Ifeanyi Ugwuanyi, as the chairman of Zoning Committee, Benue State Governor, Dr. Samuel Ortom, is deputy while Zamfara State Deputy Governor, Barrister Mahdi Aliyu Mohammed, is to serve as secretary of the committee.
The appointment of Fintiri as the chairman of the Convention Committee, it was gathered, generated some controversy among party members, who were of the opinion that he’s a close ally to the former Vice President, Atiku Abubakar.
Some party members, who observed that all the appointments have been taken over by the governors, added that the governors were not only taking appointments but have taken over the entire party.
The governors, it was also gathered, are likely to do some shakeup in some organs of the party after the convention, especially the Board of Trustees (BoT).
Recall that the party had been embroiled in leadership crisis.
This development had prompted the emergence of Yemi Akinwonmi, the deputy national chairman South to lead the party, because of the sack of Prince Uche Secondus.
Addressing newsmen shortly after the 93rd NEC meeting presided over by Akinwonmi, the National Publicity Secretary of the party, Kola Ologbondiyan said, “NEC approved the composition of the National Convention Planning Committee as well as the Zoning Committee to zone National Working Committee offices.”
On the National Convention Planning Committee, Ologbondiyan said, “NEC approved Rt. Hon. Ahmadu Umaru Fintiri, the Governor of Adamawa State as chairman, 2021 National Convention Organizing Committee.
“Senator Douye Diri, the Governor of Bayelsa State is Deputy Chairman of the committee, while Engr. Seyi Makinde, the Governor of Oyo State is to serve as Secretary.”
On the Zoning Committee, the party said, “NEC approved Rt Hon. Ifeanyi Ugwuanyi, the Governor of Enugu State as Chairman of Zoning Committee.
“Dr. Samuel Ortom, the Governor of Benue State is Deputy Chairman and Barrister Mahdi Aliyu Mohammed is secretary of the committee.
“NEC charged the committees to work hard to ensure the successful conduct of the National Convention.”
On the David Mark Committee set up by the NEC to address the leadership crisis in the party, Ologbondiyan disclosed that “NEC received the report of the Senator David Mark committee, which is intervening in certain issues relating to the leadership challenges in our party. The David Mark committee assured that efforts are on to resolve all court matters.”
The National Publicity Secretary, however, said that date has not been fixed for the submission of report by the zoning committee, but the convention date remain intact.
During the inauguration of Anambra State governorship campaign council headed by Abia State Governor, Okezie Ikpeazu earlier, Akinwonmi disclosed that the selection and choice of the national campaign were carefully made after an extensive and intensive consultation across all strata of PDP.
“The leadership of PDP has the highest optimism that the membership is capable and competent to deliver Anambra back to PDP come November 6, 2021. Anambra will fall for PDP.
“I call on all members of the Council and Ndi Anambra to close ranks and deliver the state to PDP families. The cooperation of all and sundry is expected for the actualization of PDPs dream. I would like to seize this opportunity to appreciate on behalf of the PDP, all the aspirants, who dramatically contested with the candidate, your spirit of sportsmanship is wonderful.
“I call on you to kindly hold hand together to deliver Anambra to PDP. We call on all of us to set aside differences, and look at the PDP and Nigeria above any personal consideration. Anambra is winnable for PDP,” he said.
The Governor of Delta State, Dr Ifeanyi Okowa said that PDP is set to win the elections in Anambra State.
“We have had very useful discussions with our candidates and also the chairman of the local campaign Council in Anambra State. Anambra had always been populated by the PDP. Unfortunately, because of one issue or the other we have always run into problems.
“We want to reassure the party that we are going to put in all, to ensure that we reconcile everyone, and that we go into that election as one body. And that definitely we’re going to win that election by the special grace of God.
“We know our people in Anambra, we know that they are party people, we know also that there have been issues in the past, that those issues that divide us. We are going to work day and night to ensure that we all step out from our comfort zones and step into the field to talk to the people, and to win back all who have left the party, as much as possible,” he said.
The former Vice President, Atiku Abubakar called for understanding and total reconciliation of party faithful across the country.

Wike Has Changed The Face Of Governance -Nsirim