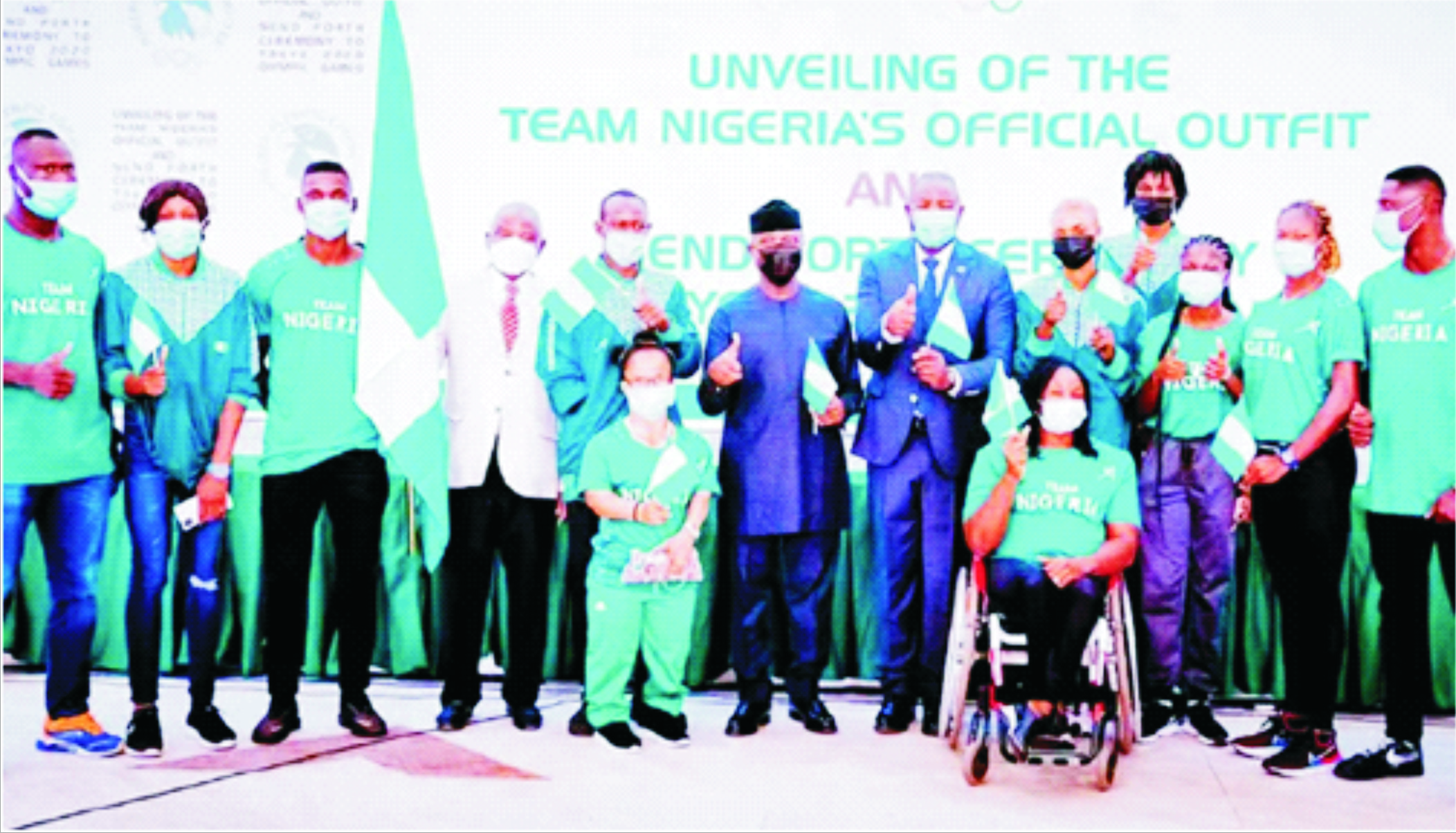 The Vice President, Yemi Osinbajo, on Monday, unveiled the official kits of Team Nigeria for the Tokyo 2020 Olympic Games.
Tidesports source reports that, Osinbajo charged the team to always remember that they were standing “on the shoulders of giants”, as they prepared to depart Nigeria.
“You will also carry with you the encouragement of the great exploits of Nigerian Olympians before you; such legends as Chioma Ajunwa, who won a gold medal at the 1996 Olympics in the long jump event and became the first black African woman to win an Olympic gold medal in a field event.
“In 2000, in Sydney, we beat the best in the world; we won the gold in 4×400m relays after the American team was disqualified for using performance-enhancing drugs. Our team then was Clement Chukwu, the late Sunday Bada, Enefiok Udo-Obong, Jude Monye, and two other members, Fidelis Gadzama and Nduka Awazie.
“And for anyone who thinks we are joking, maybe they haven’t seen our exhibition basketball game on Sunday with the USA team, especially that amazing block by Precious Achiuwa against KD – Kevin Durant, who is probably the best player in the NBA right now. I am confident that by God’s grace, you will again make history and beat the best in the world.”
He urged the team to portray the Olympian ideals of teamwork, respect and fair play.
“Olympics is about fair play, honesty, teamwork, respect, and friendship. I trust that you will, as worthy ambassadors of Nigeria, represent our nation excellently.
“Fair play clearly enjoins every athlete not to use any prohibited substances or to cheat in any way. Half of the joy and satisfaction of victory is that it was won fairly.
“Every one of you participating in the games is opening a page in history for yourself, your families, your community, and the nation,” he concluded
Prof. Osinbajo then assured the team of the prayers and support of all Nigerians as they compete with athletes from other nations.
In his remarks, the Minister of Youth and Sports Development, Sunday Dare, said the athletes were ready to make the country proud and presented to the Vice President the made-in-Nigeria kits for the Nigerian contingent.
”I am happy to announce today that the complete kit for Team Nigeria to the Tokyo 2020 Games was produced with a heavy dose of local content.
“We thank AFA Sports, Africa for Africa, a local sports equipment manufacturing company for delivering on the production of uniforms for Team Nigeria.
“This is a veritable testament and commitment of the Buhari administration to support and grow local content and industry in all sectors of the Nigerian economy,”  he added.