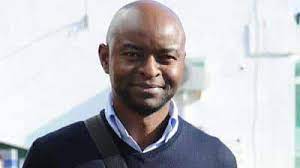 Former Super Eagles winger, George Finidi, has denied receiving a three-bedroom flat allocated to each member of the 1994 African Cup of Nations winning squad prior to last Thursday’s announcement by the Federal Government, Tidesports source.
Finidi, who earned over 60 caps for Nigeria and featured at the 1994 and 1998 World Cups, was listed among the six players who had previously got their houses before Presidential aide Garba Shehu announced the remaining house gifts to other members of the squad in a statement issued in Abuja last Thursday.
The players who were reportedly earlier given houses are Austin Okocha, Daniel Amokachi, Nduka Ugbade, Edema Fuludu, Uche Okafor and Finidi.
Last Thursday, other members of the squad, namely Peter Rufai, Alloy Agu, Ike Shorounmu, Uche Okechukwu, Samson Siasia, Efan Ekoku, Sunday Oliseh, Benedict Iroha, Isaac Semitoje, Mutiu Adepoju, Emmanuel Amuneke, Victor Ikpeba, and Austin Eguavoen, were allocated their own houses, with the late squad members Stephen Keshi, Uche Okafor, Rashidi Yekini, Thompson Oliha and Wilfred Agbonavbare also included.
But in a chat with Tidesports source, ex-Real Betis winger, Finidi denied receiving the house gift.
“They insisted that I had collected the house, which is not true. I don’t know how my name was included in the list of players who had received their houses from the Federal Government before now,” Finidi said.
“I did not get a house from the government and when I inquired, they said they gave a relative of mine that I’m not even aware of.
“They said I collected a house in Lugbe, Abuja; somebody has played a fast one on the ministry.
“Houses were allocated to Okocha and Amokachi and nobody got in touch with me to give me my Certificate of Occupancy. So someone else lives there now.
“This is a big fraud, that’s why I am speaking out now so they don’t leave me out when they are allocating houses to this next batch of players.
“It is not fair at all. I don’t know how to reach the minister to tell him my own position. If they actually gave the house out, that means someone has been making good use of my property for over 20 years and I’m not aware of it,” he added.

Ezenwa Out Of Mexico Friendly

‘I Cried When I Missed Olympics’