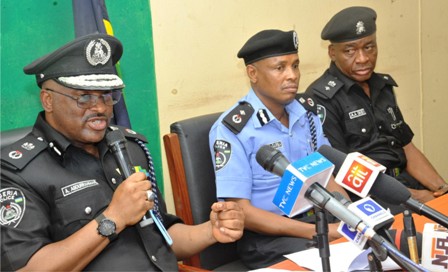 Akwa Ibom State Police Command has arrested five suspected syndicates involved in child theft and trafficking also rescuing three victims in the process.
The State Commissioner of Police, CP Imohimi Edgal made this known during press briefing at the police headquarters, Ikot Akpan Abia yesterday.
Edgal said that following a distress calls, operatives of the Anti-Child Theft/Trafficking arrested one Ifeoma James Inalegwu, female, 52 years from Imo state and Joy Njoku Patrick 40 years from Rivers State who conspired and trafficked a 1-month baby to Imo State.
He said that the Operatives also arrested one Grace Moffat Udofia, 36 years, female, from Obot Akara Local Government Area of the State, who was found in possession of a 4-month-old baby, but could not proof the authenticity of the ownership.
The Police boss also added that the Operatives arrested one Peace Archibong Umoh, female, 35years from Essien Udim Loca Government Area of the state who sold her baby after putting to birth, and was later rescued from one Nseabasi James Ukpong, female, 45years from Ikot Ekpene Local Government Area.
Edgal said that the Command also arrested Pastor Mfon Lazarus Etukudo of New Generation Church from Mkpat Enin Local Government Area of the state for the defiling a 13-year – old girl.
“Investigation revealed that the suspect (Pastor Mfon Etukudo) waylaid and dragged the victim into his bedroom located at the church premises and had unlawful carnal knowledge of her,
“On 20/7/2020, Detectives of Ikot Ekpene Division acted on a tip-off, arrested one Unyime Etim Ibanga ‘m’ aged 24 years Of No. 13 Ekot Eren Street, Ikot Ekpene who allegedly had an unlawful carnal knowledge of his 12-year-old niece.”
Related Topics:
Up Next

Ortom, Miyetti Allah In War Of Words Over Vigillante Group