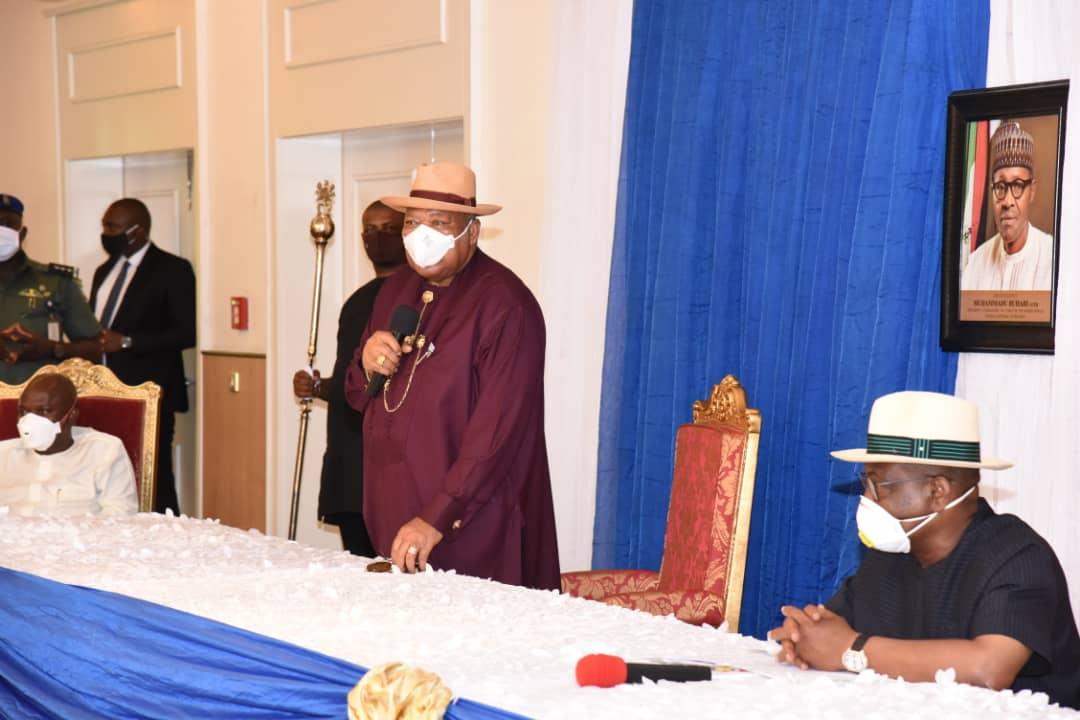 The Rivers State Council of Traditional Rulers have expressed concerns over the setting up of  the Joint Technical Task Force on Agricultural Products, Livestock, Machinery, Goods and Services, by the Inspector General Police (IGP), at the instance of the Federal Ministries of Agriculture and Rural Development, Defence, Environment, and security agencies.
This development, which, in the face of the current border lockdown imposed by the Federal Government, gives the Task Force power to ensure free and unhindered movement of food, livestock, agricultural input, etc., without the involvement of the State Government, they stated, portends danger for the people of Rivers State.
Making the fears of the Traditional Rulers known in a Press conference, the Chairman of the State Council of Traditional Rulers, His Majesty, King Jaja of Opobo, King (Dr) Dandeson Douglas Jaja, Jeki V, Treaty King, Amanyanabo and Natural Ruler of Opobo, said the development portends an influx of people whose COVID-19 status and purpose are not known into the State.
This, he stated, is against the dictates of the Constitution of the country, which explicitly makes the Governor of the State the Chief Security Officer “with full responsibility to protect lives and properties of the people and residents therein”.
Recalling that it was based on fears expressed recently on the vulnerability of the inter-state borders by the National Assembly that various State Governors acted promptly by taking measures to protect their States from possible importation and exportation of COVID-19, the Traditional Rulers questioned the rationale behind the decision to commence the work of the Task Force in the State.
“Why should the Joint Technical Task Force begin with Rivers State and to the exclusion of the Government of Rivers State, while the Presidential ban in order to check COVID-19 pandemic is in force?
“How much agricultural activities requiring large scale input including livestock are located in Rivers State? Why is Rivers State being singled out for pollution and annahilation by the possibility of the excallation of COVID-19 pandemic?
“Why would the Inspector General of Police set up such a task force without the knowledge, collaboration, participation, and consultation of the Rivers State Government?
“Is the Technical Task Force backed by any law of the Federal Republic of Nigeria outside the Constitution? What is the motive of this isolation policy directive, which we believe lacks any legal or constructional back”, he said.
Consequently, King Jaja said, “we fear that the action of the IGP is a threat to the healthy existence of our people in this period of COVID-19 pandemic as there is no guarantee that these trucks will not also carry passengers whose identities, nationalities, missions, health status, and pedigrees will be inimical and dangerous to our people.
“We fear that even if the intention was to ensure movement of food, livestock and agricultural equipment, the process could also encourage massive influx of possible bandits, terrorists, and COVID-19 infected persons to endanger the lives of our people”, he stated.

He therefore urged President Buhari to intervene by reversing the order of the IGP.

NUJ Condoles Wike Over Demise Of His S A On Media, Simeon Nwakaudu