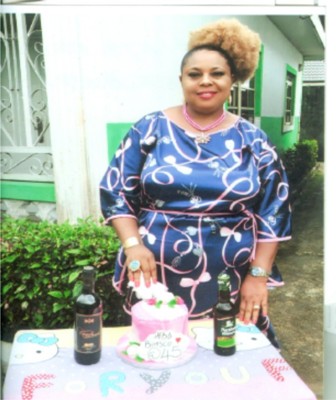 November 1st 2019,was a day to remember in the family of Reward Akwu of the Rivers State Newspaper Corporation (RSNC), Port Harcourt, as Mrs. Biriaye  Akwu  of the Editorial Department, celebrated her birthday amidst pomp, wining, dining and dancing.
The glamorous event which was held in her residence at Rumualogu, Choba in Obio/Akpor Local  Government Area, Rivers State  attracted staff of the newspaper corporation, friends and well wishers  who wished her a happy birthday  and more prosperous years ahead.
In an interview with The Tide Entertainment shortly after cutting her birthday cake, the celebrant thanked God for adding another year to her life and prayed for God’s divine protection and blessings in the years ahead.
In his vote of thanks, the husband and Head,  Proof Reading Unit of The Tide newspaper, Mr Reward Akwu, thanked the attendees as he noted that their presence contributed immensely to the success of the historic event and prayed God to reward them bountifully.