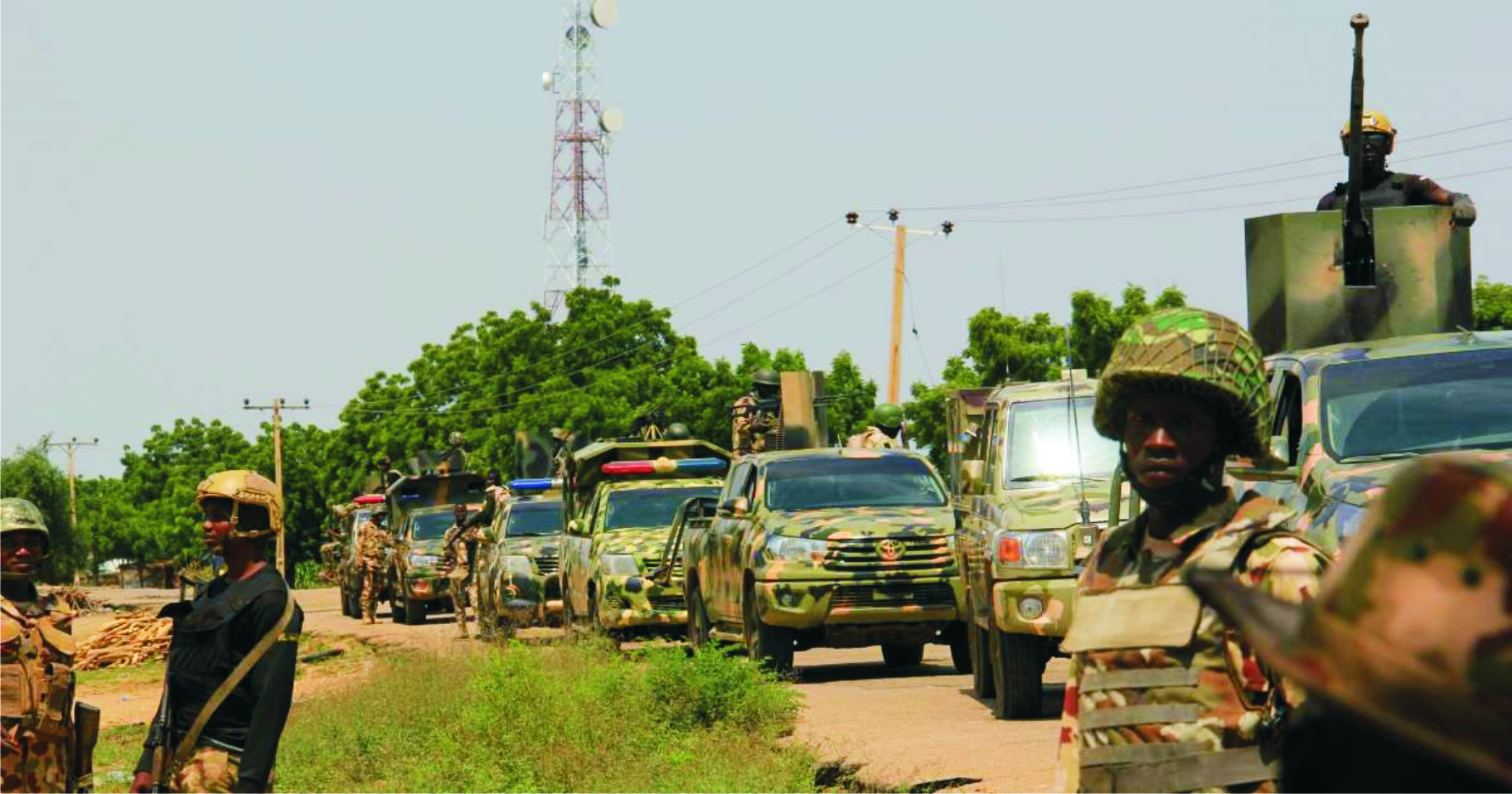 At least, four Nigerian soldiers and a militia fighter were killed in clashes with IS-aligned jihadists in Borno State, security sources said, yesterday.
Fighting erupted, late Saturday, when troops ambushed a convoy of the Islamic State West Africa Province near Jakana village, 42 kilometres (26 miles) from the state capital in Maiduguri.
“We lost four soldiers and a member of the vigilante group in the fighting,” a military officer said in reference to an anti-jihadist militia in the region.
“The terrorists came in large numbers and our troops fought gallantly but they were overwhelmed,” added the officer who asked not to be identified for fear of sanction.
Several troops were also injured and four trucks were lost to the militants, he said.
The jihadists were riding in pick-up trucks fitted with machine guns according to an anti-jihadist militiaman who confirmed the death toll.
In a statement issued Sunday, the Nigerian military said seven jihadists were killed and eight injured when their vehicle hit a landmine during a clash near Jakana on Friday.
The improvised explosive device had been planted by the jihadists, army spokesman Colonel Aminu Iliyasu was quoted as saying.
He called the blast a “tactical boomerang”.
Reacting to the incident, the Nigerian Army, yesterday, said seven Boko Haram militants were killed, while eight others were crippled when a Toyota Sam Sahara Model, belonging to the terrorists stepped on an Improvised Explosive Device (IED) laid by them against Nigerian Army troops at Lamba’a Forest along Jakana – Mainok Road in Borno State.
According to a statement by Nigerian Army Operations Media Coordinator, Col. Aminu Iliyasu, “The self-inflicted destruction consumed seven Boko Haram criminals while eight others suffered severe injuries. Consequently, troops have mobilised to the general area for route clearance and mop-up operation.”
The statement said, this was as a result of artillery bombardment and ground assault by troops of the Nigerian Army, which have been intensified across Operation Lafiya Dole Theatre, resulting in more Boko Haram casualties.
“This is a clear case that can be best described as a tactical boomerang. The incident happened on Friday, October 18, 2019, while some marauding Boko Haram criminal elements who were escaping the unbearable battle heat turned on them by NA troops,” the statement added.
In another development, a syndicate that specializes in the smuggling of smoked fish from the Lake Chad region for sale in some parts of Nigeria have been busted by the diligent troops of Operation Lafiya Dole.
The statement said, “Reliable information available revealed that Boko Haram criminals/Islamic State of West Africa Province (ISWAP) and their collaborators are using the fish business to finance and sustain their heinous activities.
“The proceeds from the sales are believed to be channelled into the procurement of food stuff, groceries, drugs, toiletries, vehicle spare parts and other items for the sustenance of their criminal activities.
“In a related development, troops of Sector 3 Operation Lafiya Dole, while acting on a reliable intelligence, raided the residence of some suspected illegal fish smugglers near Water Board Internally Displaced Persons (IDPs) Camp in Monguno LGA of Borno State.
“Four suspects were arrested and 16 sacks of smoked fish concealed in a room were recovered.
“In a similar operation conducted by troops of Sector 2 Operation Lafiya Dole on October 10, 2019, nine vehicles loaded with illegal smoked fish consignments were equally intercepted at Bukarti in Geidam LGA of Yobe State en-route Hadejia in Jigawa State. Consequently, 18 suspects including drivers, conductors, mechanics and agents were also apprehended.
“In another development, troops deployed at a check point along Baga Road in Borno State while on Operation Positive Identification arrested one Musa Ishaku, while in possession of a fake Nigeria Customs ID card which he has been using to deceive security agencies.
“Additionally, troops of 1 Division also rescued four kidnapped students from bandits at Gurmi Village in Chikun LGA of Kaduna State after a brief fire fight with criminals.
“In Rivers State, troops of 16 Brigade Garrison (Main) raided a suspected sea pirates’ camp at Tingibibi Ogu/Bolo LGA of Rivers State. The suspected sea pirates, who obviously could not withstand the overwhelming fire power of the troops, fled the enclave in disarray. Items recovered from the camp include one AK-47 rifle magazine, five rounds of 7.62mm special ammunition, three cartridges, one binocular and three para-red rocket.
“In the same vein, troops neutralised one armed robber during an anti-robbery operation at Adipet Filling Station along Rukuba Road in Jos North LGA of Plateau State. Others were believed to have escaped with gunshot wounds.
“Similarly, following confessional statements made by an arrested notorious bandit/kidnap kingpin named Yellow, troops of 3 Brigade tracked and arrested one of his gang members, Dahiru Dogo in Falgore Forest in Kano State.
“The Chief of Army Staff, Lt-Gen Tukur Buratai wishes to reassure the general public on the resolve of the Nigerian Army to rid the society of criminal elements for a secured environment.”
Jakana lies on a 120-kilometre highway that links Maiduguri and Damaturu, the capital of Yobe State.
Jihadists have raided military bases and attacked troops and motorists along the highway in the past.