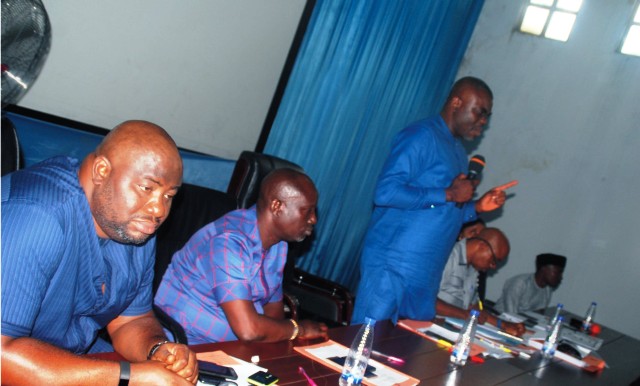 This is not the best of times for the Niger Delta Development Commission (NDDC), as its corporate headquarters located in Port Harcourt has, once again, been sealed off by the Rivers State Internal Revenue Service (RIRS) over alleged unpaid withholding tax to the tune of N50billion.
Speaking to newsmen in Port Harcourt, Chairman of the RIRS, Adoage Norteh, explained that the NDDC premises were sealed off because the commission refused to make its financial records available for audit.
According to Norteh, “The place is sealed off; we got a court order to seal off the place. We had gone to court to say that we are frustrated by the antics of NDDC.
“They had assessed themselves, last year, and admitted that they were indebted to the tune of N671million, but they did not pay.
“When we now sealed the office (last year), they then paid. We told them that we are going to audit their books, but since last year to this time, they (NDDC) have refused to allow us have access to audit their records.
“The N50billion that is being talked about is our best of judgement; that is the amount we assessed because they refused to open their books.
“That they did not object to it means that it is the amount they owe. If they have nothing to hide, why would they not show us their records? For many years, these people have refused to open their books,” the RIRS chairman stated.
He, however, noted that the agency (RIRS) had opened talks with the commission with a view to resolving the issues regarding unpaid taxes.
“We are talking with them now; they are asking that we should come and do the audit now, and that whatever we come up with, they will pay. I am reluctant because we have gone past that process; we have got a court order.
“We would not have gone to court if they had done the needful. But if they say it is not N50billion, how much do they owe? We are not interested in sentiments, we are interested in the records,” Norteh said.
Meanwhile, the NDDC has maintained that it has not defaulted in meeting its tax obligations to the Rivers State Government, even as it expressed surprise that the state revenue agency claimed the commission owed a whooping N50billion.
The commission, in a statement issued by its Director, Corporate Affairs, Charles Odili, read, “It is rather curious that the RIRS would rush to seal the gates of the commission, disrupting activities at its headquarters, without any form of notification.