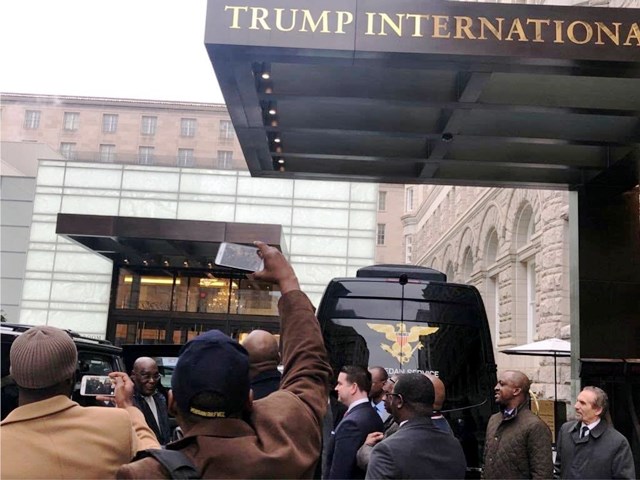 Atiku Abubakar, the presidential candidate of the Peoples Democratic Party (PDP), arrived the United States yesterday, crossing one of the most serious political hurdles on his path ahead of the upcoming general elections.
Abubakar, sources said, left Nigeria early yesterday, and has landed in Washington D.C., the American capital, ending a 12-year deprivation of visa to a country in which he once lived and owned properties.
Campaign sources told newsmen yesterday evening that Alhaji Abubakar would be speaking at a forum by the American Chamber of Commerce in Washington D.C. and attend other meetings aimed at boosting his presidential election standing.
Abubakar’s arrival in the U.S. may rattle the ruling All Progressives Congress, which has taunted him for his inability to enter the U.S. for over a decade.
Alhaji Abubakar has not visited the U.S. since 2007 when he left as Nigeria’s vice-president. He served under former President Olusegun Obasanjo.
Our correspondent reported last year that Mr Abubakar sold his estate in the United States, following his inability to enter the country. He denied that his inability to enter the U.S. informed the sale, saying he only sold the mansion because he no longer needed it as he was now fully based in Nigeria.
Abubakar’s visa appears to have come through the intervention of Chief Obasanjo, with whom he recently settled decade-old dispute ahead of the 2019 elections.
Chief Obasanjo wants President Muhammadu Buhari out of office, after accusing him of displaying incompetence in the face of myriads issues confronting the country.
Party insiders told newsmen U.S. authorities made it clear that Alhaji Abubakar was issued visa without preconditions, meaning he would not be detained or harrassed in any way if he entered the country.
Abubakar received a U.S. visa last December, sources said.
The ruling APC warned the U.S. government against granting Abubakar a visa, saying it could tip the outcome of the upcoming presidential elections.
While in US, the Presidential Candidate of the Peoples Democratic Party (PDP) Atiku Abubakar will meet with the Nigerian business community in the U.S., according to a statement by his Media Adviser Paul Ibeh yesterday.
According to the media aide, the former vice president arrived in the U.S. at 8:20 p.m. Nigerian time and 4:20 p.m. Washington D.C. time. “Yesterday, Abubakar met with the business community in Lagos at an interactive session to unveil his plans to get Nigeria working again.
“Yesterday morning, he left Abuja accompanied by the Director-General of PDP Presidential Campaign Organisation and Senate President Bukola Saraki for the United States. “Atiku Abubakar will in the course of his trip hold meetings with the U.S. government officials, the business community and the Nigerian community,” the statement read in part.
Meanwhile, Senator representing the Kaduna Central Senatorial District in the National Assembly, Shehu Sani has reacted to the presidential candidate of the Peoples Democratic Party (PDP), Atiku Abubakar’s arrival to the United States.
Our correspondent reported that Atiku Abubakar, and the Senate President, Bukola Saraki arrived in the Washington, DC, yesterday.
Atiku’s visit is against the believe that the former Vice President cannot visit the US due to corruption charges.
The Federal Government and the ruling All Progressives Congress, APC, had claimed the Wazirin Adamawa would never be able to enter the US over money laundering allegations hanging on his neck.
But speaking from US, the former Vice President said he would be meeting with US Officials.
Reacting, Shehu sani writing in pidgin, mocked the APC for claiming that Atiku cannot visit the US.
He tweeted, “I think say una dey brag and una dey make mouth say the man no fit go America. Now as the man don go and dey no catch am, make una kuku take style change una talk before shame come catch una.
“Make una say na sambisa he no go fit go, make una say na those press people change una talk, if una Dey follow that Lai lai na so linesmen una go be for lie lie. Abegi.”