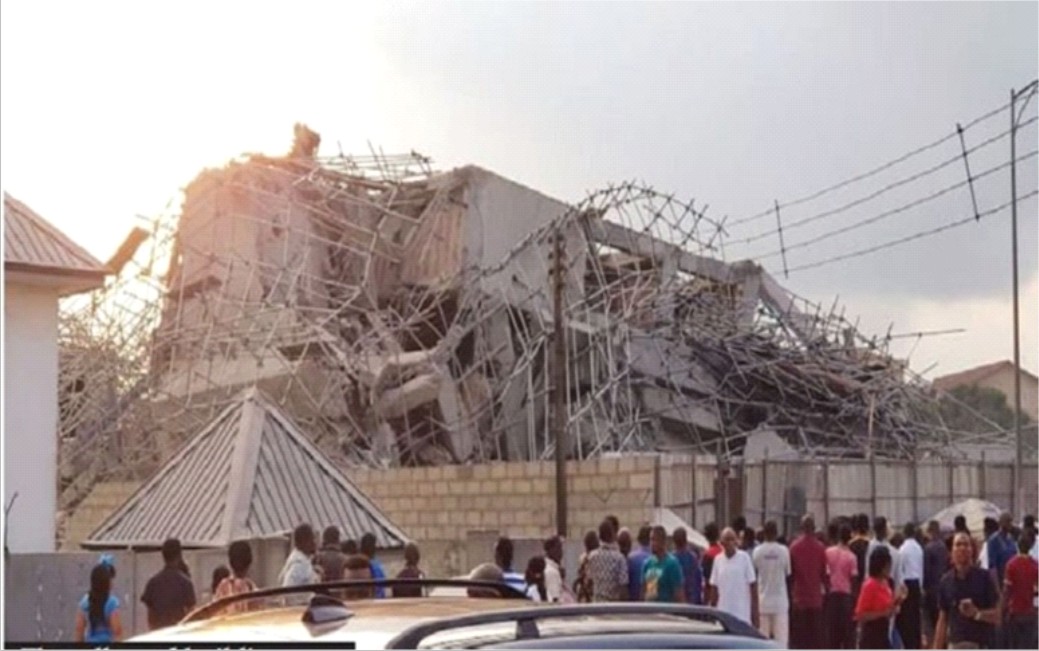 The governor’s charge reads, “To ascertain/identify the owner, developer and/or holder of the certificate of occupancy over and in respect of all that piece or parcel of land situate and lying at 119 Woji Road, (Plot 80), GRA Phase 2, Port Harcourt.
“Ascertain whether the construction of the 7—storey building on the said 119 Woji Road is covered by any valid or approved building plan and/or whether requisite approvals were issued by the appropriate ministry or agency of the Rivers State Government prior to the commencement of construction “.
The governor also charged the Commission of Inquiry to ascertain whether the architectural, engineering and structural designs of the said building were undertaken by competent and licensed experts in relevant fields.
He further charged the commission to ascertain whether appropriate/necessary tests, including soil tests, were carried out to ascertain the suitability of the site for construction of a building of that size.
Responding, Justice Adolphus Enebeli assured the governor that the commission will execute its assignment with the needed timeliness and in line with the law; adding that they will not disappoint the Government and people of Rivers State because the assignment touches the essence of humanity.
Meanwhile, stakeholders in the built industry all supported the governor’s decision to probe the incident, even as they have gone a step further to give expert advice to forestall future occurrences; in addition to commending the state government for its quick response to the incident which according to them saved many lives.
One of such is the Nigerian Institute of Town Planners (NITP) in a nine-point statement jointly signed by Tete Inameti and Emmanuel Ikechukwu, chairman and secretary of the body in Rivers State respectively and obtained by The Tide, as they called for regular audit of building structures in the state to authenticate their integrity.
While noting that though building approval agencies have always been the immediate targets of blame, the NITP said it that the public should realise that approval of building plan is a joint responsibility of all the relevant professionals in the built environment. You see, they too, like other relevant professionals bodies, are casualties.
The statement reads, “We (NITP) have been inundated with distress calls as a result of the collapse of a 7-storey building under construction along Woji Road in GRA, phase 2, Port Harcourt.
“While appreciating the calls from the public and the print and electronic media, the institute commiserates with the Governor of Rivers State, the people of the state and the families of victims of the collapse building.”
The institute noted that the tragic incident is a wake-up call to all professionals in the built environment to demonstrate the requisite professional standards and commitment to put a stop to quackery in the state, even as it called for strict penalties for those responsible for the sad incident no matter how highly placed to deter future occurrences.
The statement reads, “That town planners should be adequately staffed and equipped with professionals in the construction industry for effective routine supervision and monitoring of project sites during and after construction.
“Government should implement the Rivers State Physical Planning and Development Law No 6 of 2003 by establishing Local Planning Authorities in all 23 local government areas of the state, as well as a physical planning board at the state levels of plan approval so as to reduce the workload on the Ministry of Urban Development.
“Construction work should only be carried out by registered contractors and supervised by registered architects, engineers and builders rather than engaging unskilled contractors, while clients should obtain approvals before they begin construction and should not develop at variance with the approved plan,” the state NITP said.
On their part, the Nigerian Institute of Builders called on the State Government to set up a building control agency that will oversee building constructions in the state.
Rivers State Chairman, Nigerian Institute of Builders, Akinola Bammeke in his reaction to the November 23, 2018 tragedy further said, “What has happened is very unfortunate. One of the ways to check this kind of incidents is for the state government to set up a building control agency that will monitor building projects all through the various stages of construction,”
Bammeke also said the State House of Assembly needs to review ‘existing’ obsolete building laws to ensure that only professionals engage in construction of houses in state to avert such incidents.
In the same vein, the Nigerian Institution of Architects (NIA) led by the Rivers State Chairman, Egbuonu Asomba said only a proper probe can unravel the circumstance behind the incident.
Asomba said, “When a building collapses there are so many possible reasons for building collapse. You have to start looking at whether a proper soil test was conducted from the outset.
“Then you should also ensure that the proper design by professionals are involved at the design process. From the design of the building up to sending it for approval.
“I expect a lot more diligence, a lot more participation by every section of the brick environment. The professional architect, the professional structural engineer and every other professional must be involved to ensure that the right thing is done,” the State NIA boss said.

While the various steps taken by the state government so far in getting to the root of the matter are noble, the myriad of professional advise given by stakeholders in the built industry are very important lessons and instructions to the relevant authorities. For now, everyone should hold their horses and heave a sigh of relief, while awaiting the findings/report of the Justice led panel of inquiry; for we are all casualties of Friday, November 23, 2018, one way or the other.
By: Dennis Naku

Tackling Depression Among Women In Nigeria

Onijala writes for the News Agency of Nigeria.

Odilism As Leadership Philosophy In Nigeria