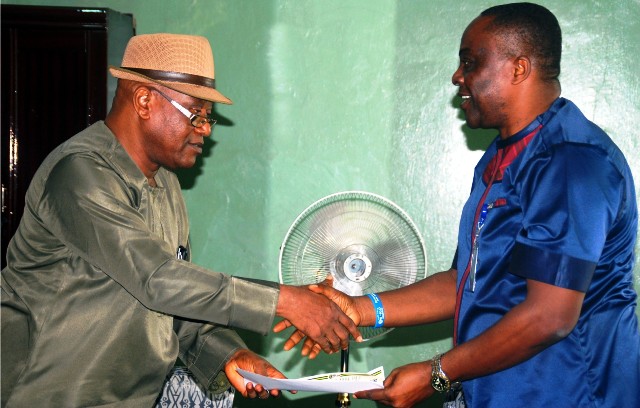 The Prophet in charge of the God’s Mercy Embassy Ministry, Eliozu, Port Harcourt, Dr Dominic Otono has advised the newly elected executive of the youth wing of the church to see evangelism as their core mandate and reach out to the world through preaching the gospel, especially to the youth in society.
Dr Otono stated this in an interview with The Tide in Port Harcourt, after the inauguration of the executive members of the church led by Bro Innocent Moses as the President, with Juliet Manson and Onyinyechi Nwagere as vice president and secretary, respectively.
The cleric appealed to the new executive to maintain peace and build unity among the youth, stressing that working in one accord with other members of the church would bring development.
The man of God, while congratulating them on their elections, prayed for God to strengthen them for the task ahead of them.
In his post-election speech, the youth president, Bro Innocent Moses extended the olive branch to his opponents and urged them to work with the new executive to build a vibrant youth body in the church.
He thanked members of the church for the confidence reposed on them through their mandates and promised to run an all-inclusive administration.
Also speaking, the Publicity Secretary, Sister Amarachi Uba said she and her assistant, Nkiru Amaefula would take the youth wing to a global world by creating a platform where opinions of the youth would be shared among members.
Other executive members elected were Godsgift Manson, Asst. Sec, Vivian Obawu, Treasurer, Gloria Efah, Asst. Treasurer, Roseline Aneke, Financial Sec; Obianuju Nnorom, Asst. Financial Sec; Patience Akpan, Welfare I; Blessing Peter, Welfare II; Precious Obowu, Organising Sec, Ansa Essien, Asst. Organising Sec; Chris Collins, Provost I and Michael Eyo, Provost II.