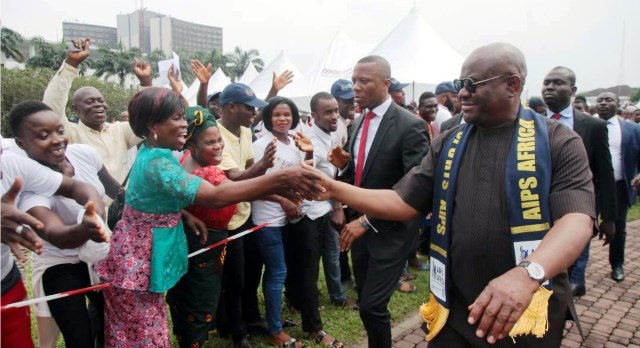 Rivers Sporting Community on Monday unanimously endorsed Rivers State Governor, Nyesom Ezenwo Wike for a second term.
This is as the Rivers State Governor, Nyesom Ezenwo Wike urged the sporting community to defend their votes in 2019.
Thousands of sportsmen, women and their supporters declared that their endorsement of Governor Wike is premised on the governor’s revival of sports after the former administration destroyed it.
The sporting community marched from Isaac Boro Park through the streets of the Old GRA to the Government House, Port Harcourt. The procession was carnival-like, as the sports community celebrated Governor Wike.
Mr Franklin Owhor moved a motion endorsing Governor Wike for the 2019 re-election.  He said the sporting community will support the governor to emerge victorious.
The motion was seconded by Prince Kali Obi, who said that all members of the sporting community are wholeheartedly in support of the Rivers State Governor.
President of Sports Writers Association of Nigeria (SWAN), Mr Honour Sirawoo said that Governor Wike emerged as the Power of Sports Award winner because of his outstanding credentials.
He said that the award received the widest international media coverage, because the international sporting press appreciates the investments of Governor Wike in the sports sector. He said Governor Wike needs to continue for greater development of the state.
Technical Director of Nigeria Football Federation, Mr Christopher Green described Governor Wike as the Pillar of Sports in Africa .
Green said: “Governor Wike has brought national and international recognition to Rivers people.  We are proud to be Rivers people because of the performance of the Rivers State Governor “.
Responding, Rivers State Governor, Nyesom Ezenwo Wike said that it is obvious that the APC Federal Government is not interested in conducting  elections , hence all Nigerians must be vigilant.
“The sign is there that they want to rig the elections.  They want to simply write results.  What happened last Friday when they invaded the State High Court is an eye-opener”, he said.
The governor reiterated that the APC Federal Government has not executed any project in Rivers State.  He wondered why the Minister of Transportation has not used his position to attract any project  to the state.
“Because they have done nothing in Rivers State, they will plan to rig. But I can only wish them bad luck.  Be prepared to defend your votes”, he said.
He said that his administration has touched the lives of the people through pro-people projects.  He said the 2015 defeated Rivers State APC Governorship Candidate lived in Diobu but failed to construct their roads as Works Commissioner.  He said the roads have been constructed under his leadership.
While thanking the  Rivers Sporting Community for their endorsement, Governor Wike said that henceforth Rivers athletes will be sponsored for major foreign sports events. He announced that five Rivers Angels players, five Rivers United Players and three Go-round Football Club players will be sponsored to the World Cup in Russia.
He said that CAF President will be in Rivers State on 28th May, 2018 to flag off the construction of the Real Madrid Football Academy in the state.