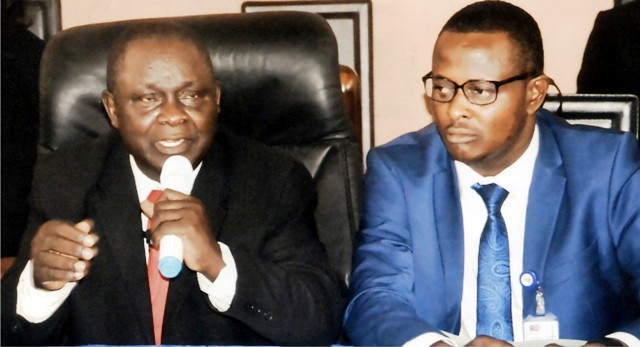 Rivers State Governor, Chief Nyesom Wike has alerted the country of the plot by some opposition politicians to set up illegal vigilante groups that will clash with the State Neighbourhood Watch to pave the way for the police to ban the new security outfit.
Governor Wike said such political plots will fail as the State Neighbourhood Watch has come to stay. He stated that only a court of competent jurisdiction can stop the Neighbourhood Watch.
Speaking during a courtesy visit by the Assistant Inspector General of Police in charge of Zone 6, Calabar, Usman Abubakar, at the Government House, Port Harcourt yesterday, Governor Wike said that the Neighbourhood Watch is strictly a security organisation that will support security agencies with intelligence to promote the security of the state.
He said that the Neighbourhood Watch is fashioned in line with the operations of a similar agency set up in Lagos State to support security agencies.
”In setting up the State Neighbourhood Watch, we adopted the process established in Lagos State. This is a replica of what is already in existence in Lagos State .
”We are setting up the State Neighbourhood Watch for intelligence gathering. Policemen and other security agencies cannot be everywhere. They need the relevant support to maintain security across the state “.
Governor Wike announced that the State Government has acquired six gunboats for the State Police Command to help it fight criminals along the waterways.
He warned against the politicisation of security operations, saying that such actions will be detrimental to the stability of the country.
He reiterated his advice to INEC and the Police to work towards the successful conduct of the 2019 general elections. He said that the police should not be used to indiscriminately arrest opponents of the ruling party ahead of the elections.
In his remarks, the Assistant Inspector General of Police in charge of Zone 6, Calabar, Usman Abubakar, said that the Zone 6 Police Command is fashioning out ways to reduce cultism, kidnapping and violent crimes in the area.
He appealed to stakeholders to work with the Police to reduce crime ahead of the 2019 general elections.
The Assistant Inspector General of Police called on all groups to come to a round table to work for peace as the police will not tolerate lawlessness.
Meanwhile, Rivers State Governor, Chief Nyesom Wike has stated that the APC-led Federal Government has no choice, but to construct the Bonny-Bodo Road.
Also, the Rivers State Governor, Chief Nyesom Wike has flagged off the upgrading and remodelling of Bonny National Grammar School, Bonny.
Flagging off the upgrading and remodelling of the school yesterday in Bonny, Governor Wike regretted that the APC-led Federal Government was playing games with the Bonny-Bodo Road project after the NLNG committed N60billion as counterpart fund for the all-important road.
The governor said that the Bonny-Bodo Road is important to the economy of the area in view of the resources that the Federal Government gets from Bonny Island .
He said: “I was the one that approached the NLNG to contribute to an arrangement for the construction of the Bonny-Bodo Road. Shortly after that meeting, the NLNG wrote to me that they will contribute 50 percent to the construction of the road, while the Federal Government will contribute the other 50 percent.
“There is no year that the NLNG contributes less than $1billion (USD) to the national economy. The contribution of N60billion for the construction of this road is nothing to the Federal Government “.
He said that there is no need for the Federal Government to play games with the Bonny-Bodo Road. He assured the people of Bonny Island that he would continue to work for the completion of the road.
The governor charged Rivers leaders in the APC to also work towards convincing the Federal Government to site key projects in the state.
“The APC is under obligation to keep her promises to Nigerians. The people are tired of these excuses on why they must not succeed”, he said.
On the Bonny National Grammar School , Governor Wike said that the school will be completed on schedule and the people duly empowered.
He said that all the contractors involved in executing the project are from Bonny, noting that it was a deliberate step by the administration to empower the people.
“None of the contractors doing this job is from outside. This is to show that we are interested in empowering the people”, he said.
While stating that the State Government has acquired six gunboats for improved security on the waterways, Governor Wike informed that the administration will improve the marine transportation system for safety and security.
He said that the Bonny/Bille/Nembe Jetty which is nearing completion will be commissioned soon.
Earlier, the State Commissioner for Education, Dr Tamunosisi Gogo-Jaja said since 1966 when the Bonny National Grammar School was established, there has been no major intervention.
He said that the upgrade will witness the construction of new laboratories, libraries, hostels, Christian Chapel and improved classrooms.
Caretaker Committee Chairman of Bonny Local Government Area, Mr Cyril Hart praised Governor Wike for the intervention in the remodelling of Bonny National Grammar School, saying that the people were neglected by the Amaechi administration.
He also commended Governor Wike for the construction of the Bonny/Bille/Nembe Jetty, urging him to work for the initiation of a cheap and safe transport system to the Island.