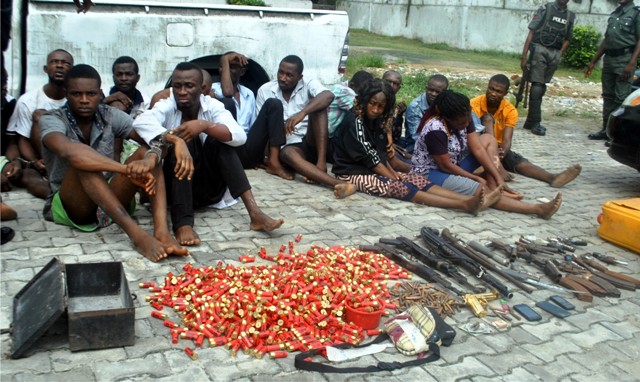 Determined to provide  a secure environment, the Rivers State Police Command, yesterday, paraded 80 criminal suspects for their alleged involvement in various crimes and other social vices in the state.
Among those paraded by the police, yesterday, was one Ugochukwu Arinze, 29, an indigene of Imo State, who allegedly killed his landlady, Mrs Ngozi Igwe from Aluu community, Rivers State, with a mortar pistol during a quarrel.
The state Commissioner of Police, Mr. Zaki Mohammed Ahmed, disclosed this while briefing journalists at the Police Officers’ Mess, in Port Harcourt, on the various achievements recorded by the command within the months of May and June, 2017.
Zaki, disclosed that the police, within the period under review, recovered cache of arms and ammunition as well as raided many criminal hideouts across the state.
Giving the breakdown, the commissioner said, 386 live ammunition, 1,275 cartridges, 20 den guns, eight AK-47 riffles, six double barrel guns, four English pistols as well as eight vehicles were recovered within the period.
According to him, the successes recorded were as a result of partnership and co-operation the command received from members of the public on information gathering.
He averred that the command mounted aggressive patrol, raided some notorious criminal hide-outs and also introduced community policing approach which aided the arrest of the suspects.
Zaki further disclosed that the command was segmented into what he called seven sectors for effective policing and crime fighting, adding that each of the sectors was being commanded by Chief Superintendents of Police, Deputy Commissioners of Police and Assistant Commissioners of Police.
The police boss disclosed that the command also arrested a gang of armed robbers, who in Choba and took the occupants to a bush in Elele on June 20, 2016, and later killed two of the occupants, adding that investigations were progressing on the matter.
“We also arrested Chioma Isaac from Rukpokwu, who stole a one-week and four -day old baby in Oyigbo. We also arrested one Bright Mgba, a fake police officer, who goes about exhorting money from members of the public, especially at the Rukpokwu axis”, he stated.
Zaki used the opportunity to warn criminals in the state to repent or relocate to other states as the state was no longer safe for them, adding that the on-going war against banditry and other social vices would be sustained until they are flushed out in the society.
Our correspondent reports that other items recovered from the criminal suspects during the parade include, four generators, three Plasma television sets, home theatre, eight laptops, assorted GSM handsets as well as raps of Indian hemp.
Speaking to journalists, one of the arrested suspects, Bright Mgba, denied being a police officer but admitted committing the crime because he wanted to pay his house rent, adding that the uniform was given to him by his police friend.