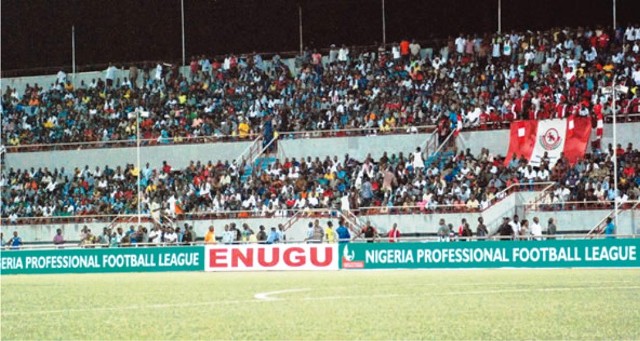 The coal city of Enugu stood still on Saturday in honour of Nigeria champions Rangers, who showed off their league crown across the city in a victory parade.
The victory motorcade, draped in Rangers traditional red and white colours, took off from the Rangers camp in Emene at about 10am and they passed through Abakpa Nike, Trans Ekulu before they terminated at the Nnamdi Azikiwe Stadium, where they had thrashed El Kanemi 4-0 on the final day of the season to be champions again after a 32-year wait.
Coach Imama Amapakabo as well as top stars like Obinna Nwobodo, Bobby Clement, Christian Madu and Etim Matthew were part of the carnival.
“I challenged Rangers to win something and this is now possible,” said Imama.
“This is a big celebration. It is trophy we won with joy and tears. Under rain and sun we fought, but I am happy today, we are all happy,” said goalkeeper trainer Sulaiman Shuaibu.
The fans came out in large numbers to celebrate with the champions.
In the meantime, sports commissioner Charles Ndukwe has announced that Enugu Governor Ifeanyi Ugwuanyi will host both players and officials of Rangers tomorrow at the National Orthopedic Hospital in Enugu, where striker Ifeanyi Egwim is fast recovering from a major leg injury he suffered on the final day of action.
The Governor is expected to on this day pledge his reward to the new Nigeria champions.
Officials said the reception was delayed because government wanted to put some logistics in place before the event.