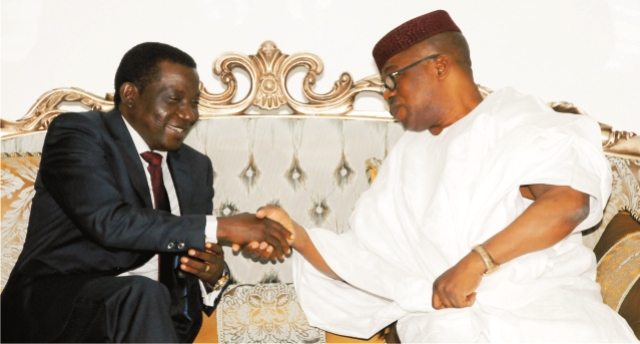 Ekiti
An Ado-Ekiti Magistrates’ Court has remanded in prison
custody a 19-year-old man, John Julius, for alleged rape of a 35-year-old woman.
The Prosecutor, Insp. Bayo Ajiboye, had told the court that the accused allegedly committed the offence on July 12 at Efon Alaaye-Ekiti.
Ajiboye said that the accused unlawfully raped a 35-year-old woman on her way from the farm and inflicted injuries that led to her being hospitalised.
He said the offence contravened Section 358 of the Criminal Code, Cap C 16, Laws of Ekiti State, 2012.
He told the court that he had forwarded a duplicate of the case file to the office of the Directorate of Public Prosecution (DPP), for legal advice.
No plea was taken.
Magistrate Modupe Afeniforo remanded the accused in prison custody, and adjourned the case till August 19 for further mention.

FCT
The Nigeria Police Force has warned its personnel against
giving money for selection for Peace Support Operations (PSO).
The Officer in charge of Peacekeeping, Deputy Commissioner of Police, DCP Lawan Jimeta, told newsmen that the police force frowned at issues of indiscipline among its officers.
He said that fraudsters had opened face book account in his name and other officers with their photographs with the aim of duping unsuspecting and greedy officers.
“For the avoidance of doubt, peacekeeping selection is not done on face book, there are established procedures and it is not done with money,” he said.
He said that anyone requesting for money to select any officer for peacekeeping was only out to deceive such officer.
Gombe

The United Nations Entity for Gender Equality and Em
powerment of Women, (UN Women), has commenced a two-day workshop to train journalists on promoting women’s engagement in peace and security in Northern Nigeria.
Our correspondent reports that the programme is founded by the EU and implemented by UN Women, in collaboration with UNICEF which promotes and strengthen women’s leadership and advance gender equality
The United Nation Security Council Resolution (UNSCR) 1325 on Women, Peace and Security, was adopted by UN Security Council on 31 October 2000.
The UN Women Program Manager, Mr Peter Mancha, who stated this during a workshop in Gombe, said the media had become meaningful stakeholders in promoting peace, gender equality and women security.

Jigawa
The Jigawa State Government recently directed the State
Universal Basic Education Board (SUBEB) to suspend further in-training for teachers, as those sponsored for training over five years ago were yet to resume.
Alhaji Bala Ibrahim, the Commissioner for Information, Youth and Sports, disclosed this recently in Dutse when he briefed journalists after the Executive Council Meeting.
Ibrahim explained that over 5,000 out of the 22,000 primary and junior secondary school teachers in Jigawa  were trained at various institutions over five years, had not reported at their duty posts.
The commissioner said that the executive council had set up a committee to investigate those on training with a view to finding a way forward.
Kaduna
The Nigerian Air Force said it arrested six applicants
over alleged impersonation and falsification of documents during its ongoing screening of candidates for enlistment into the force.
The Chairman, 2016 Nigerian Air Force Recruitment Board, Air Cmdr. Charles Oghomwen, said at a news briefing in Kaduna that those arrested included four males and two females.
He said that the suspects would be handed over to the police for proper investigation and prosecution.
“We have observed the alarming trend of impersonation, forgery, falsification of documents, certificate racketeering and false claims.
“Signing Attestation Forms, Guardian Consent Form and Guarantor Forms of persons of questionable characters constitutes an offence,” Oghomwen said.
Kebbi
The Executive Director, Kebbi State Library Board, Alhaji
Umar Sani, has observed that the emergence of the mobile phones has contributed to the decline in the usage of public libraries.
Sani made this observation in an interview with our correspondent in Birinin Kebbi, recently.
He said that the reading culture among the people, particularly youths, had declined, due to the dependence on the Internet facilities.
According to him, the present state administration would adopt measures to improve library services by updating the book stock, and expanding e-library to attract people.
In a separate interview, the Deputy Director of the board, Alhaji Yahuza Ngaski, said that arrangements would be made to establish a special section for the children in public libraries.
Kogi
A security expert, Mr Olusegun Adeyemi, has called on
the Kogi State Government and the state House of Assembly to consider the use of death penalty for kidnappers.
Adeyemi made this call in an interview with newsmen in Lokoja.
He noted that crime would reduce drastically, if such penalty was in place for perpetrators, adding that the spate of kidnapping in the state was alarming.
Adeyemi said that crime was becoming a daily activity in the state and therefore urged the state House of Assembly to pass the death penalty for kidnappers into law, so that the government could enforce it.

Kwara
The Federal Road Safety Corps (FRSC), Kwara State Com
mand has advised motorists in the state to desist from concealing their vehicle’s number plates.
The Sector Commander, Mr Sunday Maku, gave the advice in a statement signed by the Sector Public Enlightenment Officer, Mr Solomon Meremikwu, in Ilorin.
Maku said that concealing the numbers was contrary to Section 37 of the National Road Traffic Regulations (2012).
The sector commander declared that the section clearly stated that number plates must be fixed conspicuously at all times.
“The corps will commence enforcement of displaying number plates in appropriate places very soon”, Maku said.
Lagos
Mrs Cecilia Ajayi, 42, has pleaded with an Igando Cus
tomary Court in Lagos State to dissolve her 20 years’ marriage with her husband, John Ajayi, aged 46.
Cecilia, the petitioner, accused Ajayi, the defendant, of being as a womanizer.
“My husband is a womaniser, he is dating four girls in our street and brings them into our matrimonial home.
“On many occasions, he and his lovers had beaten me up whenever I prevented them from entering our room.
“He was not satisfied with his lovers, as he severally made attempts to rape my younger sister,’’ the wife told the court.
She also accused John whom she bore three children of being a consumer of excessive alcohol.
Cecilia said, “John is a drunk. After drinking to stupor, he will be falling inside gutter, talking in an incoherent manner.”
Nasarawa
Gamun Centre for Care in Nigeria, an NGO, has offered
free Hepatitis testing to 10,000 persons in Akwanga Local Government Area of Nasarawa State.
The Director of Administration of the centre, Mrs Blessing Yieju, said this at a sensitisation programme in Akwanga to mark the 2016 World Hepatitis Day.
Yieju noted that the level of awareness on viral hepatitis was very low among the people, which made the massive campaign imperative.
She said statistics had shown that about 25 million Nigerians were affected by viral hepatitis and that less than five per cent of those living with the disease were not aware of their condition.
Yieju explained that apart from the sensitisation and free testing, the centre would also give vaccines to those affected by the disease at a token fee.

Sokoto
Governor Aminu Tambuwal of Sokoto State has prom
ised to honour all agreements with the United Nations Children’s Education Fund( UNICEF), in spite of the dwindling economic situation in the country.
Tambuwal, who was represented by the Secretary to the State Government, Prof. Bashir Garba, said this at a two-day mid-term review meeting on the progress of the joint UNICEF-State Government Annual Work Plan, 2016.
“The state government has done a lot in so many areas of development despite the economic development of the country and surely will do more.
“Sokoto State government will not be left behind in ensuring that we meet the standard and requirements of the fund, for the overall development of the people.
“We will do everything possible to see that our own counterpart fund as required by UNICEF meet the standard in all the sectors of the state.”

Taraba
The Minister of Women Affairs and Social Development,
Senator Aisha Alhassan, said the Federal Government has released N150 billion for women entrepreneurship development in Nigeria.
Alhassan, who is on an official visit to Taraba State, told newsmen in Jalingo that the money was part of the N500 billion Social Protection Fund.
According to her, the fund has been deposited at the Bank of Industry (BoI) for women entrepreneurs to access.
She said out of the fund, N1.6 billion was earmarked for micro finance scheme for women.
The Minister said that sensitisation campaign on how to access the fund had already begun and that during her visit to the state she had sensitised women groups on how to access the facility.
Alhassan also revealed that the National Gender Policy was currently under review to enhance inclusiveness and participation of women in all spheres of government.