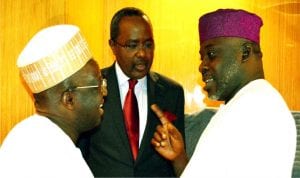 Chairman, House Committee on Capital Market, Rep. Yusuf Tajuddeen (right), discussing with representative of the Minister of Finance, Dr Mahmud Isa-Dutse (left) and Director-General, Security and Exchange Commission (SEC), Alhaji Munir Gwarzo, at the inauguration of the study team on Voice and Voting Power in the Nigerian Capital Market in Abuja on Monday.

Managing Director, Nige
ria Police Force (NPF) Microfinance Bank (MFB) Plc., Mr. Akin Lawal  has commended the Federal Government for setting aside N220 billion to boost Micro Small and Medium Enterprise (MSME) development in the country.
Lawal told newsmen in an interview yesterday in Abuja that the decision was one of the best things the regulators had done for the sub-sector.
“Basically, I think it is one of the best things so far that the regulatory authorities have done in the subsector in the area of the N220 billion MSME fund.
“In terms of cost, they have been able to bring it down at a very considerable low rate of initially three but now two per cent; and you cannot get that anywhere
“But we need more of such funds to strengthen the system.’’
According to him, the fund has been very supportive and it will go a long way in reducing the cost of funds being that it is given at a single digit of nine per cent.
Recall that the Federal Government earmarked N220 billion MSME intervention fund to support the microfinance subsector.
“The fund has been helpful in provision of finance to address the core sector of the economy because, of course, it is restricted to the productive sectors of the economy
“You are only expected to do about ten per cent of that fund in commerce but mainly into the productive sector.
“And that is what actually is needed for us to create jobs and these are the things that will boost the economy of the country.
“Because, in anyway, if you are engaged in productive sector, there is no how you will not employ two or three people to join you and that is what we need at this point in time.’’
On bad loans, Lawal said it could be avoided with due diligence ‘’because with proper due diligence, one will be able to identify a bad loan before it is even granted’’.
According to him, most operators grant loans to beneficiaries who use the fund as ‘guinea pig’ for experiment on various business ventures which they are not certain about.
He said intervention funds were not meant for experimentation.
Lawal also urged the regulators to provide a common IT platform for all MFBs at an acceptable cost which would help improve their operations in the country.
“They should come up with more supportive initiatives that will be helpful to the subsector in general.
“The demand for credit is insatiable, the entire 1000 MFB or so we have in the system are not still enough to meet the demand sector
“ As you know, there are still huge numbers of the population that are unserved and how do you manage this, it is from the supply and that is in terms of the fund available.’’
Also, Mrs Nwanna Joel-Ezeugo , the Acting Managing Director, Accion MFB, urged the government to come up with a concrete economic blueprint.
“We are providers of fund, let’s know where we are going, the operators in the market, let them know where they are going to enable us strategies
“Because when there is no clear cut policy, the inconsistency will kill more and more people and throw a lot of people out of job.’’