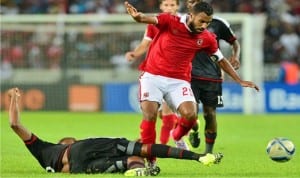 Captain of Al Ahly (2nd left) trying to go past an opponent in a recent game.

Following the performance of Team Nigeria at the just-concluded Perfect World Team Championships in Kuala Lumpur, Malaysia, the Segun Toriola-led side has moved up in the latest table tennis world ranking.
The International Table Tennis Federation (ITTF), organisers of the championships said in a statement yesterday that Nigeria has been rated 24 and the best African team globally.
The statement also described the nation’s side as the “West Africa giants.’’
Prior to the ITTF World Team Championship in Malaysia, Nigeria was rated 32 behind Egypt which placed 25.
The statement said that ITTF noted that the team’s ranking placed the country with 216 points ahead of Egypt, which now occupies 29th position with 208 points.
It said that Nigeria’s outstanding outing at the competition in the Asian nation contributed to the rise in the world rating.
The statement also said that In the women rating, Egypt remained the best in the continent as the North African country was now ranked 29.
It said that the absence of the Nigerian female team may have caused their slide to 40th place in the world.
In spite of the slumping of Nigeria, the team still remains the second best team in Africa ahead of Congo Brazzaville, Algeria and Tunisia.
According to the statement, China which clinched the men and women’s titles at the competition remains the best teams in the world.
Reacting to the rating, the Vice-President, African Table Tennis Federation (ATTF), Olabanji Oladapo, described Nigeria’s performance as commendable.
Oladapo, however, decried inadequate support for the sport by the government, stressing that it affected the team’s general performance.
“Considering the level of preparations, their performances were very surprising but good as they topped their highly competitive group, consisting of five top table tennis playing nations, including Slovakia and India.
“Lack of effective preparations and stamina for the competition affected them and caused their loss to India in the quarter-final, a team they had defeated 3-0 at the group stage.
“Aruna Quadri and Segun Toriola impressed the spectators with their outstanding performances in spite of playing without a technically sound coach on the bench.
“We have the players and we know our generic problems,’’ he stressed.
The former Secretary-General, Nigeria Olympic Committee (NOC), also lamented the absence of the Nigerian women team which, he said, would caused the team to play in lower division in the tournament’s next edition.
“The absence of Nigerian women meant that they cannot qualify for 2016 Rio Olympic Games. They are likely to be relegated to a lower division too.
“This will be confirmed after the World Table Tennis Championship (WTTC).
“What is obvious is their drop below Egypt, Congo Brazzaville, Algeria and probably South Africa in ranking as they were all at the competition.
“We will feel the effect of our ‘no show’ in African multi-sports games like African Games,’’ Oladapo regretted.
To help grow the sport in the country, the member of ITTF Board of Directors said that “we must go to the basics in all our sports.
“Refocus development of table tennis in schools, on the streets and neighbourhoods and recreate sporting culture that produced past heroes.