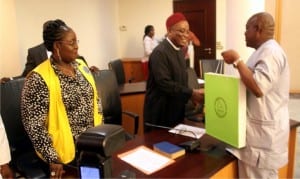 Hundreds of traders from
Mile 3 Market in Diobu, Port Harcourt Local Government Area of Rivers State have denied reports in the media that, they were asked to pay the sum of N2,000 each for the governors perfume as alleged by some women.
Last Tuesday, some women who claimed to be traders of Mile 3 Market,  alleged that a taskforce set up by the Caretaker Committee Chairman of Port Harcourt imposed various levies on them including N2,000 for the purchase of perfume for the state governor.
It was against this background Mile 3 market traders turned out in their numbers last Friday to debunk the alleged N2,000 levy said to have been collected by the council’s taskforce.
The spokesman of the traders, and coordinator of Rivers State Traders Association (RISTA) Hon. Edi Bright Chinedu described  the allegation of N2,000 for the governor’s perfume by the women as false and baseless.
According to him, a thorough investigation was carried out by the executive of RITA, CTC of the Port Harcourt City Council’s  and other stakeholders to ascertain the truth, but the finding revealed that no taskforce demanded N2,000 for the governor’s perfume.
The trader’s spokesman explained that actually there was a taskforce by the council to collect its usual yearly levies, which included sanitation, security and others enshrined in the council bye-laws, but there was no person or trader that was asked to pay N2,000 for the Governors perfume.
He described the last Tuesday protest by the women as politically motivated to tarnish the image of the state governor.
Also speaking CTC Chairman of Port Harcourt City Council, Mr Sunny Sam Ezekwu said, he was not aware of any extortion in Mile 3 market.
According to him, I will not hesitate to sack or dissolved any committee that is involved in illegality.