In a bid to boost movie
production in Rivers State, the Rivers State Commissioner for Culture and Tourism, Mrs. Tonye Briggs Oniyide, has assured members of the Association of Movie Producers (AMP) Rivers State chapter of the ministry’s  willingness to partner  the Association and take the industry to the next level.
The commissioner gave the assurance during an interactive session with members of the association in her office on Wednesday, The commissioner who stated that she is a lover of the movie industry, said she is jealous of Lagos, Enugu and Asaba where the movie industry thrives, and that she keeps praying and hoping that one day the movie industry in the state will get to that stage or even beyond.
She noted that the ministry would also help by calling on hotel owners and other hospitality operators to give a rebate to the movie producers to help cut down on their cost of production, provided they have a good script and marketable storyline.
On the issue of film village, the commissioner disclosed that the state government is interested in establishing a film village to boost the movie industry in the state. She however urged them to always come with good ideas to the ministry for them to look at as to know the areas to assist. She commended the Association on their efforts toward the growth of the industry despite the daunting challenges they face in the process. She called on members of the association to encourage their colleagues in Lagos, Enugu and Asaba to come back home as there is adequate security and enabling environment for film making in the state.
Also speaking, the permanent secretary, Mr. Micheal Ejihuo disclosed that he has a passion for the movie industry and that the ministry is ready to partner with the association. He noted that all over the world the movie industry is in vogue because it is a money spinner. He however noted one of the areas the ministry is ready to come in, is through regulation in order to protect the intellectual rights of the producers against pirates.
The permanent secretary noted that Rivers State is a heterogeneous state with several ethnic nationalities. Therefore the association should try to bring all together so as to achieve a greater height. According to him, the Hausa, Ibo and Yoruba promote their culture through their film, Rivers State should also do so if we must be a force to be reckoned with in the industry.
The permanent secretary also urged the movie producers to write good scripts with interesting storylines which they could take to the banks, if the script is good, the banks will invest in the production of the film because both the producers and the bank would be sure of getting back their money with profit.
Earlier in his address the Chairman Association of Movie Producers, (AMP) Rivers State Chapter, Mr Fisim Lawson Young Arney noted that the association had done a lot on their own to keep the flag flying even when most of their colleagues had left the state to other cities like Lagos, Enugu and Asaba to seek for a greener pasture as movies are shot in such cities almost on daily basis.
According to him the association has approached most of the multinational companies and organisations to come to their aid, but to no avail, hence the decision to approach the ministry. which happens to be their parent body to partner with the association to save the industry from decline.
He appealed to the ministry to reach out to hotel owners to cut-down their charges to enable the association use their facilities. He said other hospitality outfits should also give them rebate to enable them meet other challenges.
He stressed that movie making is capital intensive and the producers takes the risk of financing the movie, they bear the financial burden of the cast the crew, logistics etc at the end they may not be able to recover their capital.
He disclosed that over areas of concern include the nefarious activities of pirates who rob them of their profit by pirating their movies as well quacks who go about producing sub standard movies thereby killing the image of the industry in the state.
He therefore called on the ministry to regulate the industry in order to flush out the pirates and quack producers which is the only way to move the industry forward and give it a pride of place in the Nigerian movie industry. 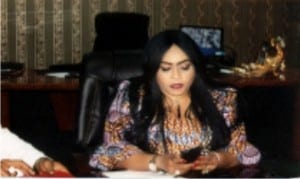 Producer Speaks On New Movie, Too Late To Die