Monday Ogoh, a 27-year-old driver, who resides be
hind AP Filling Station, Aliade, Benue, was on Monday arraigned before a Makurdi Magistrates’ Court for allegedly robbing two of his passengers of N735,000.
Ogoh was charged with criminal conspiracy and robbery, punishable under Section 97 of the Penal Code Law of Benue and section 1 (1)(2)(a)(b) of the Robbery and Firearms Act, 2004.
According to the Police Prosecutor, Insp. James Zungwe, the case was transferred from Aliade Divisional Police Headquarters to the State CID Makurdi through a letter dated December  31, 2015 zungwe said that the letter stated that Moses Adoh of Abulu-Ulu LGA of Delta reported the matter at Aliade Police Station in December 2015.

The Borno State Government said that it had inaugu
rated a 12-man committee to capture biometric data of its workforce.
Secretary to the State Government (SSG), Alhaji Jidda Shuwa, who stated this in a statement in Maiduguri, said that the committee was inaugurated by Gov. Kashim Shettima in Maiduguri.
He quoted the governor as saying during the inauguration that the objective of the exercise was to remove loopholes or infractions that might impede implementation of government policies and programmes.
“The biometric of the state workforce will also ensure effective and qualitative workforce and create employment opportunities as confirmed vacancies will be filled up,” the governor was further quoted as saying.

The residents of Karu Local Government Area of the
FCT has called on the FCT Minister, Malam Muhammad Bello, to provide them with a general hospital.
Alhaji Suleiman Musa, the Sarkin Hausawa of Karu, made the appeal in an interview with newsmen in Abuja.
Musa explained that a tertiary medical facility was initiated by former FCT minister Nasir El-Rufai for the community, but suffered neglect by his successors.
According to him, the structure put in place by El-Rufai was eventually handed over to an Indian firm under a Public-Private-Partnership (PPP) arrangement.
“However, the exorbitant services being offered by the Indians are beyond our means and as such most residents do not patronise the hospital.
“If this project is actually designed for the benefit of poor Karu community, the APC change government should urgently address the situation,’’ said the traditional ruler.

The Miyetti Allah Cattle Breeders Association of Ni
geria (MACBAN) has urged the Federal Government on the provision of welfare services to nomads in the country.
The National President of the association, Alhaji Muhammad Kirowa, made the plea while speaking with newsmen in Dutse.
Kirowa particularly urged the government to provide adequate grazing lands, watering points, cattle routes and dams for Fulani herdsmen across the country.
He recalled that President Muhammad Buhari had while heading the Petroleum Trust Fund (PTF), planned to address some major issues affecting the welfare of nomads including problems of grazing lands, watering points and cattle routes.
Kaduna

The Christian Association of Nigeria (CAN) in Moro’a
chiefdom, Kaura Local Government Area of Kaduna State, is to hold a-10-day consecration prayers for peace and unity in the chiefdom.
The chiefdom’s secretary of the association, Rev. Mapunu Yohanna, made this disclosure in an interview with newsmen in Kaduna.
Yohanna explained that the prayers, which would be held in the 10 districts of the chiefdom, were organised in collaboration with the Moro’a traditional council.
According to him, the prayer is to consecrate the people and rededicate them to God as well as strengthen the prevailing peace and unity in the land.
“This prayer has become necessary in view of the current atmosphere of insecurity, mistrust and suspicion among the people along ethnic, religious and political divide”.
Kastina

The Federal University, Dutsin-ma, Katsina State, has
given 11 students, who graduated with First Class degrees, automatic employment.
The Vice Chancellor of the university, Prof. James Ayatse, made the disclosure in Dutsin-ma at the maiden convocation of the institution.
Ayatse said that the students graduated from 11 departments in the Arts, Management/Social Sciences and Education faculties.
‘’I am glad to inform you that the university’s Governing Council has approved that appointment letters of the First Class graduands be issued to them during this ceremony,’’ he said. Division.

The National Council of Women Societies (NCWS)
has constituted a committee to enlighten people in Irepodun Local Government Area of Kwara on the signs, symptoms and prevention of Lassa fever.
Mrs Moradeyo Abidoye, Chairperson of the society in the area, said this during an interview with newsmen in Omu-Aran.
She said that the assignment would take members of the committee to markets, churches and mosques, where they would also sensitise the grassroots on other similar ailments.
The chairperson called for adequate public awareness on how to prevent the outbreak of Lassa fever, especially at the grassroots.

The Sultan of Sokoto, Alhaji Sa’ad Abubakar, has
appealed to the three tiers of government to make teaching of both Islamic and Christian Religious Knowledge to be compulsory subjects in the school curriculum.
Abubakar made the call during the closing ceremony of the 30th National Qur’anic Competition in Lafia on Saturday. “

The Chairman, Ogun State House of Assembly Commit
tee on Health, Mr Akinpelu Aina, has urged the federal and state governments to take awareness campaign against Lassa fever to rural areas.
Aina, representing Ado Odo Ota I constituency, made the call in Abeokuta in an interview with newsmen.
The lawmaker said this had become necessary following the increasing number of casualties of the disease.
He said that people living in rural areas were more prone to the disease because of their environments
Aina urged the Federal Government to pay more attention to the health of the citizens.
He, however, commended the Minister of Health, Dr Isaac Adewolu, on steps taken so far to prevent the spread of the disease.
“Ogun State Government has also taken a bold step by setting up three isolation centres in its bid to contain any case of an outbreak of the dreaded Lassa fever”.

Governor Abiola Ajimobi of Oyo State has charged clubs
and associations in the state to support government policies aimed at developing the state.
He made the call at the investiture of Prof. Ezekiel Idowu as the 18th President of the Omo Aj’orosun Club, Ibadan.
Ajimobi said that the contribution of everyone in developing the state was obligatory, urging them to “ stop playing the ostrich.’’
“You all should be at the fore front of Ibadan progress. Irrespective of our status in the society, we are all responsible to the society, “he said.
He urged the people to shun character assassination, politics of bitterness while rallying for unity and peace among the citizenry.
In his remarks, Alhaji Sharafadeen Alli, former president of the club and one time Secretary to the Oyo State Government, stated that the club was non-political as stipulated in its constitution.
Alli said that the club had contributed immensely to the development of Ibadan and the state at large, promising that it would continue to do more.

Sokoto State Government will assist the victims of the
fire that razed the tubers, vegetables and fruits market in Sokoto, Gov. Aminu Tambuwal, has said.
Our correspondent reports that the market popularly called ‘’ kasuwar daji’’ was razed by fire recently.
The fire destroyed no fewer than one hundred shops, an articulated vehicle loaded with yam tubers, among others; but no life was lost and nobody sustained injury.
The State deputy governor, Alhaji Ahmed Aliyu, who visited the market on behalf of the governor, commiserated with the affected traders.
He expressed shock at the extent of damage caused by the fire and prayed Allah to compensate and reward those who lost their shops and goods. 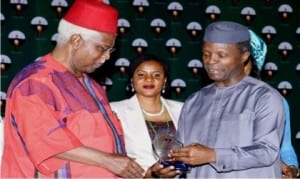 Vice President Yemi Osinbajo (right), presenting an Award of the Icon of Democracy’ to former Vice President, Dr Alex Ekwueme, at the 2016 Annual National Political Summit in Abuja on Monday