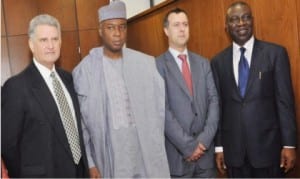 The Rivers State Governor, Chief Nyesom Wike says appointment to serve in his administration will be by merit and not by political patronage.
He made the declaration last weekend while swearing-in four commissioners, Secretary to the State Government and Chief of Staff as well as Special Adviser on Media and Publicity in Government House, Port Harcourt.
He, therefore, warned them not to see their appointment as an opportunity to enrich themselves and satisfy their personal interests, but to serve Rivers people in honesty and purpose.
Wike told the new Commissioner for Justice and Attorney-General, Emmanuel Aguma, “We don’t want you to be an Attorney-General that will not give good advice to the governor and deputy governor. We don’t want you to be the Attorney-General that will ensure that the courts are closed. We don’t want you to be the Attorney-General that will go outside the state to look for court injunctions, but rather an Attorney-General that will bring justice to Rivers State”.
The governor said he has no doubt that the new commissioner for justice is capable of delivering on his mandate, and congratulated him.
To the new Chief of Staff, Engr. Emeka Woke, the governor counseled him to run an open-door policy, where every Rivers citizen and non-indigenes will have access to government, warning that “you are not only a Chief of Staff to PDP but you are a Chief of Staff to anybody that has come to the state to carry out one business or the other. The office is a very key office”.
The governor reiterated that he would not hesitate to disengage any appointee who fails on his duty or displays divisive tendancies.
Congratulating the new Commissioners for Finance, Fred Kpakol and his counterparts for Agriculture, Onimim Jack, Wike expressed the  hope that they will bring their expertise to bear on their new positions.
To the Commissioner for Finance, he advised him to administer the state’s purse with discipline, while urging that of Agriculture to do her best to make agriculture key player in employment generation and economic rejuvenation.
Wike said the administration was taking its time to select the best brains to head the various ministries, and therefore, assured that he will always consult leaders and opinion moulders on the best way to administer the state.
The new commissioners include, Fred Kpakol, for Finance, Emma Aguma for Justice and Attorney-General of the state, Onimi Jack is to serve in Agriculture Ministry while Emma Okah is to man the Housing Ministry.
Others are Chief Kenneth Kobani, who is the Secretary to the State Government, Chukwuemeka Woke as Chief of Staff and Opunabo Inko-Tariah, who is to serve as Special Adviser on Media and Publicity.
Meanwhile, Special Adviser to the Rivers State Governor on Media and Publicity, Opunabo Inko-Tariah, has pledged to ensure a robust relationship between media practitioners and the state government.
He said, “For sure, I don’t think anybody will impugn on that. My job is to project and protect the governor and that is what I will do”.
On his part, new Commissioner for Housing, Barrister Emma Okah said he would evolve a new housing policy in line with the new Rivers vision, while explaining that housing remains key to the Wike administration.