The Independent Corrupt Practices and other related offences Commission yesterday grilled a former Inspector General of Police and Chairman of the Police Service Commission, Mike Okiro, over fraud related allegations.

Okiro, who was dressed in an ash coloured Niger Delta attire, arrived at the commission’s headquarters in Abuja in a black Toyota Land Cruiser Jeep, with registration number T 98 01 FG (PSC) and moved into the investigation department of the ICPC at about 9:51am in company of his Chief Accountant, Bisala A. A., Ibeh E. C; and George Todonu, his police orderly.

Two others – Bello B. and Raymond Imiobo – later arrived the ICPC headquarters at about 11:30am, in connection with the investigation.

This followed the invitation by officials of the anti-graft agency over a petition sent to it by the Principal Admin Officer (Press and Public Relations Unit) of the PSC, Aaron Kaase.

Okiro was, however, granted administrative bail as he left the anti-graft agency at about 4:10pm.

Kaase said the petition was based on his findings and concern as a citizen of Nigeria and staff of the Police Service Commission, whose civic responsibility amongst others includes fighting corruption in our society.

He said: “As a build up to the 2015 General Elections, the Police Service Commission relying on provisions of its establishment Act, sought for and obtained the sum of N350,000,000.00 from the National Security Adviser (NSA) purportedly to train her staff in Monitoring the conduct of the Nigeria Police in the concluded General Election.

sought for approval to use same vide two letters to the Bureau of Public Procurement (BPP) with Ref No.PSC:1499/VOL/111/138 dated March 12 and received on March 19,2015, the Commission requested for the issuance of “No objection” to adopt selective tendering Method for the training of Commission staff on Monitoring of Police conduct during the 2015 general elections.

Kaase, in his petition, stated that the entire Police Service Commission’s staff are not up to 400.

The petitioner further accused the commission’s chairman of fraudulently deceiving the Bureau of Public Procurement to obtain an approval for his scam on March 23, 2015 with reference No.BPP/S.I/15/VOL.1/050 to carry out the fraud.

It was further alleged that Okiro also collected N4.6 million as first class ticket to travel to the United States of America in 2013 without doing so.

Kaase added: “An example was when he collected the sum of N3,601,000.00, his Police orderly, Inspector George Todonu, collected the sum of N1,131,000.60, to attend the conference of the International Association of Chiefs of Police from 25th-28th October, 2014 in Orlando, Florida USA, which held in Dublin, Ireland on the 28th of October, 2014, which held at the same time without attending none.”

It was also alleged that Okiro used his personal aides “as front to collect DTA and other allowances”.

Those mentioned were SP Ibitomi, CSP Peter Opara and other Special Assistants.

He allegedly used them to collect over N2 million as Duty Tour Allowance during the March 28 and April 12, 2015 general elections.

Meanwhile, Kaase, the petitioner, who said his life has been threatened after sending out the petition, also alleged that at a meeting held on June 2, 2015 in his office, Okiro was said to have been jittery and shaking.

He also instructed Kaase to withdraw the said petition, retract the publications in the media and forward a written apology to him in order to lift the suspension placed on him.

Sources within ICPC has said that the commission was going to do a thorough and painstaking job in getting to the bottom of the weighty allegations as the issues being raised were not ones to be rushed. 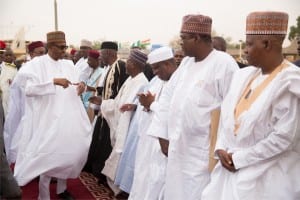 President Muhammadu Buhari (leftl), being received by Governors Kashim Shettima of Borno State, Ibrahim Geidam of Yobe and Aminu Tambuwal of Sokoto states, during his arrival at the airport for a bilateral meeting with President Mahamadou Issoufuoin Niamey, Niger Republic, Wednesday.