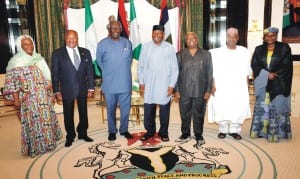 Bauchi
The candidate for All Progressives Congress (APC) vy
ing for the Bauchi South Senatorial seat, Malam Ali Wakili, has defeated Gov. Isa Yuguda of the People’s Democratic Party (PDP), to represent the District in the National Assembly.
Announcing the result of the election in Bauchi on Monday, the INEC Returning Officer for the Senatorial District,Dr Shuaibu Musa, said Wakili polled 341708 votes to defeat Yuguda, who secured 115341 votes
Yuguda and Wakili were the only candidates that contested for the seat.
Wakili 55, a 1982 graduate of Bayero University, Kano, had served with the Bauchi State Government, before transferring his service to the Nigeria Customs Service in 1991.
While in Customs, he held command positions at Ikeja Industrial Area, Tin Can Island, Seme Area Command as well as Commandant, Kano Training School.
He retired from the Nigeria Customs Service in 2009 as Comptroller of Customs.
Bauchi South Senatorial District comprises of seven local government areas, namely Kirfi, Alkaleri, Toro,Tafawa-Balewa, Bogoro, Dass and Bauchi.
Benue
Governor Gabriel Suswan has lost in his bid to return to
the National Assembly after an eight-year stint as governor of Benue state.
Our correspondent reports that Suswam was elected governor in 2007 after serving two terms as member of the House of Reps.
Suswam lost to a former National Chairman of the PDP Barnabas Gemade, who contested under APC.
Announcing the results last Monday at the INEC headquarters in Makurdi, the returning officer for Benue North East Senatorial election, Prof Mohammed Adah, said Gemade polled 140, 715 votes to beat Suswam, who polled 118, 603 votes.
The returning officer also announced that a total of 661,067 voters registered for the election with 290,446  accredited, while 266,232 votes were counted as valid.
He said rejected votes were 5,096 while total number of votes cast was 271,328.

FCT
All Progressives Congress (APC) candidate Zakari-
Angulu Dobi was last Monday declared winner of the Abuja South Federal Constituency election.
The Independent National Electoral Commission (INEC) Returning Officer, Dr. Sani Saka, who announced the result Kwali, FCT,  amid tight security, said that Angulu polled 14,486 votes.
Saka said that Angulu defeated his opponent, Mr. Danladi Etsu Zhin, of the Peoples Democratic Party (PDP), who got 12,431 votes, while Usman Jiya of the Peoples Democratic Movement (PDM) got 888 votes.
Our correspondent reports that all the four INEC collation officers comprising Abaji, Kwali, Gwagwalada and Kuje had earlier announced their results separately.
Reacting to the result, Dobi commended INEC for conducting a peaceful and transparent election in the history of the country.
He commended the of people for coming out en-masse to exercise their civic duty, which led to his victory.

Jigawa
A chieftain of the All Progressives Congress (APC) in
Hadejia, Jigawa State, Alhaji Muhammad Gabi has described the victory of the party in the Jigawa North-East Senatorial election as a ‘’welcome development’.
Gabi said this in an interview with newsmen on Monday in Hadejia.
The Independent National Electoral Commission (INEC) had declared the APC candidate, Alhaji Ubali Shitu, winner of the
election.
Shitu scored 193, 960 votes to defeat two other candidates, Alhaji Ahmad Sarawa (PDP) and Ahmed Kaugama (PDM), who polled 97, 196 and 1, 266 votes, respectively.
Gabi said that the outcome of the election was a reflection of the popular wishes of the people.
Kaduna
Human rights activist,  Shehu Sani of the All
Progressives Congress (APC), last Monday was declared winner of the Kaduna Central Senatorial seat.
The  Returning Officer, Independent National Electoral Commission (INEC),  Prof. Mohammed Kabir-Yakubu, who declared the result in Kaduna, said Sani scored 268,964 votes to defeat  five other contestants.
He said Sen. Ahmed Aruwa of PDP polled 168, 241 votes; Talatu Shehu of AP,  2,415 and Sherifat Abdullahi of ADC got 982 votes.
The returning officer said other contestants, including Salihu Halliru of APCN and Inuwa Haruna of PPA, scored 390 and 409 votes, respectively.
Our correspondent reports that with this result, the APC won two senatorial seats and PDP, one.

Kano
The All Progressives Congress (APC) has won
the Kano North senatorial seat, defeating Senator Bello Hayatu, who has been in the Senate since 1999.0
The APC candidate, Alhaji Barau Jibrin, an accountant and World Bank consultant, secured 381,393 votes to end Hayatu’s 16 year’s in the Senate.0
The Returning Officer, Prof. Ibrahim Ahmed, who declared the result on Monday in Bichi, said the incumbent senator, who contested for the fifth time under the Peoples Democratic Party (PDP), got 107, 845 votes.0
Ahmed said the election had recorded massive turn-out of voters and was conducted peacefully.

Kano
Senator Kabiru Gaya of the All Progressives
Congress (APC) has retained the Kano South Senatorial District in the Saturday’s National Assembly election.
The INEC Returning Officer for the Senatorial zone, Prof. Auwalu Arzai, announced the results at the collation centre in Rano last Monday.
He said that Gaya polled 488, 528 votes, to defeat Alhaji Sani Rogo of the Peoples Democratic Party (PDP) who got 145, 923 votes.
Arzai, who described the election as peaceful and transparent, commended the voters for their peaceful and massive turnout.
Our correspondent reports that with this result, the All Progressives Congress has won all the three senatorial seats in the state.
Osun
A security expert in Osun State, Alhaji Hassan Hussein,
has commended the Police for the professionalism they showed during the last Saturday’s Presidential and National Assembly elections.
Hussein, a retired police officer and head of a vigilance group, newsmen in an interview in Osogbo that the conduct of the police was unprecedented.
According to him, the Nigeria Police has “really come of age as a desirable institution in a democratic setting”.
‘’It is very clear that we are developing our institutions as a democratic nation; the police is one of the institutions that have really advanced rapidly with time.
‘’Obviously, the degree of professional acumen exhibited by the force on Saturday clearly showed that Nigeria can rely on the police as an agent of democracy.
‘’I urge the Inspector-General of Police to sustain the tempo even after the results of the elections have been declared, so as to avert any form of post-election violence,’’ he said.
Plateau
Mr Timothy Golu, who was declared winner of House
of Representatives seat for Pankshin, Kanke and Kanam constituency of Plateau State, has urged INEC to improve on its new electoral strategy.
Golu, who won on PDP’s platform, made the appeal on Monday in Pankshin, in an interview with newsmen shortly after he was declared winner of the seat by INEC.
“From what we notice during last Saturday’s Presidential and NASS polls, INEC’s introduction of Card Readers did not give room for our electorate to freely exercise their civic rights.
“More than half of the registered voters did not participate in last Saturdays elections because of the technicalities involved in the innovation, “ he said.
The winner, who expressed gratitude to God and the people that stood by him, called on electoral the umpire  to improve on the new system by removing all bottle necks associated with it.
Zamfara
The gubernatorial candidate of the Peoples Democratic
Party (PDP) in Zamfara State, Alhaji Mamuda Shinkafi, has commended security agents for providing effective security during the Presidential and National Assembly elections in the state.
Shinkafi, who was the immediate past governor of the state, told newsmen in Shinkafi on Monday that the conduct of the security personnel at polling centres had assisted in making the election peaceful and violence free.
He said that the 2015 elections was a departure of the ugly crisis witnessed in 2011.
“The arrangement by INEC is better than in the past and I am sure it is out of experience as there was orderliness at polling centres to deter any misbehaviour,” Shinkafi said.
He also commended INEC for the smooth conduct of the elections across the styate.