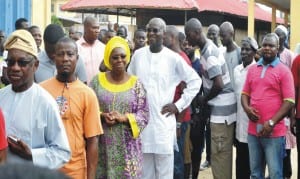 As the nation awaits the results of the Presidential and
National Assembly elections conducted on Saturday, Nigerians have been urged to take the outcome of the results as the will of God.
Pastor Olusola Adewumi of the Christ Apostolic Miracle Church, Ikole in Ekiti State made the call in his sermon to mark Palm Sunday in Ikole, Ekiti State.
Adewumi attributed the successful conduct of violence-free elections in the country to the prayer and fasting by Nigerians and Christians in particular during the Lenten period which would soon come to an end.
He said “only the creator chooses a leader; whoever emerges as winner should be supported for the progress and unity of the country.
“Let us prevail on our fellow brothers and sisters to accept the outcome of the elections, be it the seat of the President or National Assembly,’’ he said.

The INEC Resident Electoral Commissioner (REC), FCT,
Prof. Jacob Jatau, has lauded the performance of the commission in the Saturday Presidential, Senate and House of Representatives polls at the Territory.
Jatau said this in an interview with  newsmen in his office in Abuja on Saturday.
“I am impressed with the high turnout of electorate as every polling unit in the FCT recorded massive turnout,’’ he said.
Jatau said although there were some hitches in the early hours but as at 11.30 a.m. most polls units in the territory had started accreditation.
“At the beginning of the polls we had some slight hitches especially with the opening of the poll, but after sometimes we were able to overcome the hitches and the polls were opened.
“As you are aware the commission had directed that anyone who stayed in the queue on or before one o’clock should be accredited.
“So we followed that guideline and we were able to do accreditation in many places,’’ he said.

Communities in Kwami Local Government Area of Gombe
State have appealed to federal and state governments to beef up security before April 11 governorship and state assemblies elections in the state.
Some of the residents made the appeal in an interview with newsmen in Kwami on Saturday.
A resident, Malam Abdullahi Abubakar, said the people were frightened by the disruption of the Presidential and National Assembly elections in some parts of Dukku and Nafada local government areas of the state.
He said that a lot of people had attempted to run in Kwami when they heard of an attack by gunmen.
Abubakar said that if government did not increase security measures the communities would be affected in future.

Alhaji Adamu Ahmad, the Peoples Democratic Party
(PDP) Jigawa North-East Senatorial candidate, has advocated for measures to enhance the INEC Card Reader, to ease voting process.
Ahmad made the call in an interview with newsmen on Sunday in Kafin-Hausa Local Government Area of the state.
Ahmad, who is also the speaker, Jigawa House of Assembly, said it was imperative to adopt new technologies that would make it function effectively in subsequent elections.
“The card reader is a welcome development. But the failure of the machine to function well is causing unnecessary delays in vote casting.
“The Independent National Electoral Commission (INEC) should ensure that the machine is good to avoid repeating the mistakes in future election,” he said.

The Nigeria Police has announced the death of the Katsina
State commissioner of police,  Alhaji Muhammad Hurdi.
The Police Public Relations Officer (PPRO), DSP Aminu Sadiq announced the demise of Hurdi in a statement issued to newsmen on Sunday in Katsina.
Sadiq said that Hurdi died on March 27, after a protracted illness.
He said that the late commissioner joined the service in 1988 as ASP cadet officer and rose through the ranks.
The PPRO said that Hurdi would be remembered as a patriotic and dedicated officer who gave his best in the service of his fatherland.

Chieftains of Peoples Democratic Party (PDP) and All
Progressives Congress (APC) in Kwara on Saturday said the conduct of Presidential and National Assembly elections in the state was peaceful and satisfactory.
They made the remark while speaking with newsmen shortly after casting their votes in Ilorin.
Prof. Oba Abdulraheem of PDP told journalists that he was happy with the peaceful conduct of voters in his ward.
He said voters comported themselves in orderly manner during accreditation and actual voting.
Abdulraheem said people were now more enlightened to their civic responsibility as epitomised by their turnout for the election.

Governor Babangida Aliyu of Niger has called for more
public education on card reader and voter card before using them for elections.
Aliyu made the call after casting his vote at the Musa Umar Ward Polling Unit in Minna on Saturday.
He said the use of the two innovations had thrown up the challenges encountered during Saturday’s election.
“You can imagine a situation where the card reader fails to identify me and I even have to use my 10 fingers on the reader without success. It was at the eleventh try that my finger was recognised.
“This is a delay that can be avoided. This card has my name, my picture and this is my polling unit. I have been recognised by even the INEC official but the process has to be followed.
Osun

Governor  Rauf Aregbesola of Osun on Saturday
commended the Independent National Electoral Commission (INEC) for introducing card readers for the 2015 general elections.
Aregbesola spoke after casting his vote at his polling unit, Unit Four, Ward Eight, Ifofin in Ilesha East Local Government Area  of Osun.
The governor said that the card reader device had helped to drastically reduce possible manipulation of the electoral process.
According to him, the ongoing 2015 general election in the state was better than what was witnessed during the August 9, 2014 governorship election in the state.
The governor commended the security arrangement, which he described as civil in contrast with what the people of the state experienced during the August poll in the state.

The Emir of Kanam, Alhaji Babangida Mu’azu and the
Chairman, Panskhin Local Government of Plateau, Mr Samuel Goar, on Saturday commended the peaceful conduct of the Presidential and National Assembly elections.
They both commended the electorate in separate interviews with newsmen in Kanam and Pankshin Local Government Areas for their peaceful conduct.
While describing the election as “a success” despite the hitches in the accreditation of voters, Mu’azu said the maintenance of peace was “paramount and laudable.”
“We have every reason to thank the Almighty God for the way and manner we as Nigerians in this part of the country went about the election.

Mixed reactions have trailed the use of card readers in
Saturday’s election in the northern part of Zamfara state.
The state Commissioner for Information, Alhaji Ibrahim Birnin-Magaji, commended INEC for the introduction of the technology.
He said the card reader had eliminated chances of rigging in the election which could have led to violence.
Birnin-Magaji said despite hitches in the take-off of accreditation across the zone, INEC deserved commendation for putting everything in place for the successful conduct of free, fair and credible elections.
He expressed optimism that at the end of the election, people would appreciate INEC’s effort on the card reader, adding that about 70 to 80 per cent efficiency had been recorded.