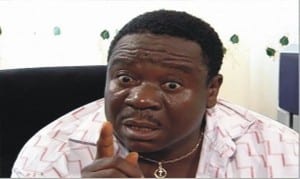 Nollywood Comic Actor,
John Ikechukwu Okafor, popularly known as Mr Ibu and ‘Black Arrow, Star Actor, Segun Arinze have condemned the recent court judgment which upturned Ibinabo Fiberesima-Ebuka’s election as the President of the Actors Guild of Nigeria (AGN). They said it as an attempt to draw the AGN backward.
In a telephone interview with The Tide Entertainment on Monday, Mr Okafor who condemned in strong terms the high court ruling on the matter said “it is an unfortunate development as it would affect the image of the industry negatively. It is an internal affair that could have been handled in-house rather than going to court”.
He, however, stressed that as a law abiding Guild, the actors body would not disobey the court ruling, because that would amount to contempt of the court which is not a good thing, but the body will do everything possible to resolve the issue amicably among the members and inform the court of our resolution on the matter.
The award winning comedian noted that Ibinabo had done very well for the movie industry by repositioning it positively among other glaring achievements which have given the actors and actress a sense of belonging not only in Nollywood but the society at large.
He said the AGN president should be allowed to continue with her selfless service towards moving the industry forward instead of dragging the members backward because of selfish interest. He stressed that members of the Guild are solidly behind their dynamic president, Mrs Ibinabo Fiberesima-Egbuka.
In a related development,  a former president of the AGN, Mr Segun Arinze popularly known as ‘Black Arrow’ recently lambasted A-list Actor Emeka Ike for taking the AGN president, Ibinabo Fiberesima-Egbuka to court. He said “it is a sick joke, I find the judgment shaddy and a kankaroo arrangement”.
The former AGN president noted that Emeka Ike is a non issue as far as the AGN members are concerned. He urged members of the Guild to resist the evil plans of Emeka Ike and his cohorts. According to him, the AGN has gone passed that, we should not condone one man to embarrass the industry.
The ‘Black Arrow’ declared that Emeka Ike needs help to save himself from himself. He stressed that AGN should declare him a person non grata in the industry as they are moving forward ‘cest fini’. The popular actor stressed that Ibinabo Fiberesima-Egbuka remains the bonafide president of the AGN, enough is enough. This shenanigan has to stop for good”, he maintained.
However, Nollywood Super, Actor Emeka Ike, has described the court ruling that upturned Ibinabo’s election as AGN president few days ago as “victory for Nigerian judiciary and Nigeria as a whole, it is a victory for the young and oppressed in Nigeria and it shows that our justice system is still very tenable, Ibinabo should cover her face in shame for wanting to deceive the Nigerian people.
He described Arinze’s comments as “mere market talk”, that should be discredited. He stressed that Arinze is an illiterate who should be ignored. According to him, reacting to the comment of a man the court has disenfranchised shows that I do not have respect for the rule of law. His statement does not matter as much as the statement of the judge.
Meanwhile, in a statement released by Ibinabo’s camp, the actress insists that she is still the president of the AGN since the judgement did not make Emeka Ike the president of AGN. According to her, the Board of Trustee (BOT) had done well to uphold the AGN constitution’s provision that there cannot be a lacuna in government, hence she remains the president of AGN.
The actress and ex-beauty queen said she does not have any problem with Emeka Ike, but ‘the case in question is between Emeka Ike, the Board of Trustees (BOT) and the Segun Arinze-led government of national unity, it is not I and Emeka as some blogs have wrongfully reported”. She however stated that she would appeal against the judgement.
It would be recalled that two weeks ago justice James Tsoho at the Federal High Court Lagos, nullified Ibinabo Fiberesima-Ebuka presidency of the AGN which he said was illegal, while Emeka Ike, who filed the case against Ibinabo is rejoicing over the judgment which annulled the election of November 2012 that brought Ibinabo into office, the registered board of trustees has gone to the appeal court to challenge the judgement.