Adamawa State Acting Governor, Ahmadu Umaru Fintiri,
took the first step into his three-month stay  with the appointment of a university lecturer, Prof. Liman Tukur, as Secretary to the State Government (SSG).
While administering the oath of office on Tukur, the acting governor said the new wind of change would bring succour to the people of Adamawa State and promised that his administration would include all shades of opinion.
He said although the Economic and Financial Crimes Commission (EFCC) had not reopened the state’s statutory Allocation accounts, he had ordered the payment of salaries for June and the May shortfall.
Fintiri promised to pay the two months outstanding from 2012 when the workers were on strike and the former governor had to apply the no-work-no pay rule and disclosed that the state consolidated revenue account is indebted to the tune of N6 billion.

Representatives of the Chibok community in Abuja have
said the 12 fathers and five girls who spoke with Pakistani girl-child education activist Malala Yousafzai never requested to meet with President Goodluck Jonathan or any government official.
The Borno State indigenes said they only received the invitation to meet with the President after the girls and the parents had returned to Chibok. The parents were said to have been invited through a letter addressed to the Chairman of the Chibok community in Abuja, signed by the Chief of Staff to the President.
The community described as “unfounded” the Presidency’s accusation that the #BringBackOurGirls campaigners discouraged the parents from meeting with the President.
Kaduna

Sultan of Sokoto and President General of the Jama’atu
Nasril Islam, JNI, Alhaji. Sa’ad Abubakar III, has called on the Boko Haram and other terrorist groups in the country to cease hostilities in the country and embrace peace.
Abubakar also urged Muslims in the country to make the best use of the last 10 days of the Ramadan to seek for the night of power. This was contained in statement signed by the Secretary General of JNI, Dr. Khalid Aliyu Abubakar in Kaduna recently.
The statement read, ‘’The Sultan of Sokoto has called on Nigerian Muslims to mark the significance of the last 10 days of Ramadan by maximally reciting more of the Qur’an; being punctual in observing the daily obligatory prayers- the Tarawih and Tahajjud in congregation

The march towards 2015 General Election took a danger
ous dimension in Kano last Wednesday following calls by youths under the auspices of Arewa Youth Development Foundation for the division of Nigeria as a political entity.
The protest that was held outside the palace of the Emir of Kano shortly after a courtesy call on monarch, attracted hundreds of youths believed to be students drawn from tertiary institution in Kano.
Emir of Kano, Alhaji Muhammadu Sanusi II, appealed for calm and enjoins the youths to imbibe the lesson of peace in their entire endeavour considering the critical role they play in nation building.

The Kogi State House of Assembly last Wednesday ap
proved the nomination of 15 from the 17 persons whose names were forwarded to it for approval by the state governor, Idris Wada.
The House Speaker, Alhaji Momoh-Jimoh Lawal, in his charge to the successful ones, urged them to key into the government’s Transformation Agenda for the overall development of the state.
One of the returnees and former Information Commissioner, Yabagi Bologi, and a new nominee, Stephen Aremu were absent during the screening exercise.
The screened nominees include Joe Abrahams, Zakari Alfa, Barr. Umoru Mohammed, Dr Idris Omede, Abdulrahman Wuya, Steve Mayaki, Dr. Abdulmumuni Usman, Ali Aju and Olatunji Oshanusi, who are all returnees. The six new nominees screened include Zainab Suleiman-Okino, Fidel Egwuche, Dr. Agnes Okai, Zacchaeus Atte, Barr. Kayode Olowomoran and Abubakar Ainoko.

The paramount ruler of Mada, Akwanga in Nasarawa
State, Samson Gamu-Yare has called on Nigerians to always monitor their neighbours and report any suspicious activities to security agencies.
Gamu-Yare made the call recently at a security meeting with village heads and other community leaders in Akwanga Local Government Area of the state.
He said there was a need for Nigerians to know the people staying in their neighbourhoods, adding that everyone must monitor the activities of his/her neighbour and report any illegal activities to security agencies for prompt action.
In a remark, Anthony Yamusa, the District Head of Akwanga, thanked the royal father and appealed to the general public to joint hands with them so as to expose criminals in the area
Osun

Special Adviser to the President on Inter-Party Affairs,
Dr Ben Obi, has stressed the need for the conduct of free, fair and acceptable governorship election in Osun.
He made the call last Thursday in Osogbo at a sensitisation workshop for officials of political parties contesting the poll  organised by the office of the Special Adviser to the Presidency on Inter- Party Affairs.
The special adviser reminded political parties of the need to ensure compliance with the revised political parties’ code of conduct they signed.
The chairman of the occasion, retired Admiral Ndubuisi Kanu, charged all stakeholders to give the growth and stability of democracy the necessary attention and stressed the need for political parties and stakeholders to make the indivisibility and peaceful co-existence of the country a priority.
Plateau

Uncertainty has gripped the PDP in Plateau over the
confusion trailing the suspension of its Chairman, Dr Haruna Dabin.
Dabin was suspended from office in May at a PDP Stakeholders’ executive meeting over allegation that bordered on financial mismanagement.
Dabin, who was suspended for two weeks, was also accused of running a one-man show and refusal to convene congress sessions “for several years’’.
A committee was set up to investigate the officer and report back within the period.Dabin, who before his suspension had declared his intention to contest the governorship election, was replaced in acting capacity by his deputy, Mr Raymond Dabo.
.
Taraba

The TY Danjuma Foundation has released about N35.1m
to five Non-Governmental Organisations to undertake various community-based projects across Taraba State under its Grantee projects for 2014.
The Executive Director of the Foundation, Dr Florence Eta-AkinAina,  in an interview in Jalingo last Wednesday. said the funds which were approved by the Chairman of the Foundation, Retired Gen. TY Danjuma and the Board of Trustees, were made available for intervention for projects in the areas of health, education, income generation as well as the Taraba Community Fund.
She said that four representatives each from the five beneficiary-organisations had already received training on the implementation of their programmes and on how to access the funds.
Eta-AkinAina,  said the organisations are: Chagro Care Trust; Great Women Multipurpose Cooperative; Great Gender Grassroots Foundation; Better Living Advancement Centre; and Guidance and Counselling Development Association and  urged the benefiting communities to own the projects and ensure their maintenance and safety.

Zamfara State House of Assembly, the Speaker, Sanusi
Garba Rikiji may risk being impeached for granting permission to the state government to secure bank loan.
The crisis started last Tuesday when opposition Peoples Democratic Party (PDP) lawmakers in the House kicked against government’s decision to secure N3billion loan from the Central Bank..
The Minority Leader, Alhaji Ibrahim Dole, who spoke to newsmen insisted that all actions of the ruling APC members in the House would remain null and void.
According to him, opposition members would go to any length to challenge both the state government and their colleagues even with impeachment if they do not reverse the unwholesome act of taking the loan. 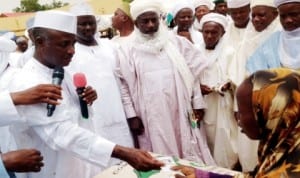