Rivers State Governor, Chibuike Amaechi has again called for education to be made a focal point in all states led by the All Progressives Congress (APC) in the country.
Amaechi spoke through the Secretary to the State Government, Mr. George Feyii during a two-day workshop tagged,”Crisis in Nigeria Education Sector: Addressing the Connect Between Unemployment and Insecurity,” organized by the Progressive Governors Forum in Port Harcourt.
The governor insisted that education should be restored to its former glory to move the country forward.
He said, “It behoves on us as a people to chart the course to bring back the good old days and restore the educational system to what it used to be.
“Good policies and programmes will help us to move education forward in this country. A lot of us think that the present generation is not getting the best of education…So, we need to look at the specific areas to achieve the main goal.”
The workshop, which is sequel to the one held at Kano in May, is aimed at evolving a unified policy framework for APC states all through the country.
Amaechi held that the government in Rivers State was already giving education premium attention, noting that the goal is to ensure that society grows peacefully.
“You are aware that once a person is educated, he can do a lot of things for himself. And this is very important to us because with education, a person can achieve what he wants to achieve in life,” he said.
Chairman of the Progressive Governors Forum (PGF) and Governor of Imo State, Owelle Rochas Okorocha, represented by his Deputy, Prince Eze Madumere, said the workshop forms part of the vision of the APC to transform the country’s education sector.
Okorocha said, “all the commissioners are here today to look at those issues that will better the system that we already have.
“When the people are not educated, when the people are not empowered, what do you get? Insecurity will kick-in. Young men and women who are graduates today, who are probably not educated or gainfully employed and you have all these social vices that are kicking-in.”
Earlier, Director-General of the PGF, Malam Salihu Lukman disclosed that the workshops are part of goals set out by the secretariat with focus on education, unemployment and health.
He said the idea behind the workshop is to evolve a marshal plan that will be adopted by APC states, since all the reports will be translated to policy briefs for the governors.
Rivers State Commissioner for Education, Dame Alice Nemi, in her remarks, said the state has already evolved a new education policy guarded by the law and can only be reviewed every 10 years.
Aside the new curriculum, Nemi stated that the government has employed 13,000 teachers to boost manpower, built over 300 model primary schools equipped with ICT and modern equipment, pointing out that in the future, the state will reap huge benefits from the investment in the sector.
About 13 commissioners for education from APC states attended the workshop where various experts spoke on diverse topics bordering on educational programmes and policies.
Meanwhile, the 25 pro-Governor Chibuike Amaechi lawmakers in the Rivers State House of Assembly on Wednesday formerly announced their defection from the People’s Democratic Party (PDP) to the All Progressives Congress (APC).
Speaking on the floor of the House, the Leader, Hon. Chidi Julius Llyod, said he has the mandate of the 25 pro-Amaechi legislators to convey to the house and the speaker their formal defection from the PDP to APC.
According to him, “henceforth, all correspondents to them should be the All Progressives Congress. This is because we are now members of the APC”, he said.
He also said that members have written to the House officially on the matter.
The Speaker, Rt. Hon Otelemaba Dan Amachree said he will not stop them from moving from PDP to APC, but asked other members, if they were in support of what the leader had said and they affirmed. 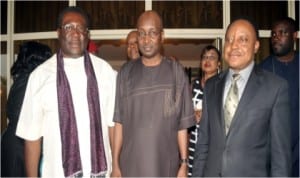