Governor Rochas
Okorocha of Imo State has called on the Federal Government to revisit the report of the Oputa Panel for the peace and progress of the country.
Okorocha made the call last Wednesday at a special tribute session organised by the state government in honour of the late Supreme Court Judge, Justice Chukwudifu Oputa, at the International Conference Centre, Owerri.
He said the report contained ideas and insights on the way forward for Nigeria and if strictly adhered to, could tackle most of the challenges that had bedevilled the nation.
The governor said there was no point dividing the nation or overheating the polity on the basis of political party, social or religious differences.
Okorocha called on Nigerians, irrespective of their tribe and religion, to unite for the peace and unity of the country and described the late Oputa as an incorruptible judge who left his mark in the sands of time.
“This is a tribute to a great and worthy son of Igbo land. It is a tribute to a man who lived an exemplary life; a man whose work and legacy will always speak for him,” he said.
The governor stressed the need for people to emulate the sterling qualities of the late justice and leave a legacy in their lives.
Okorocha announced that the judiciary complex under construction would be named after the late jurist.
In his tribute, the Attorney General and Commissioner for Justice in the state, Mr Chukwuma Machume, described the late Oputa as a great star, who stood for justice, peace and good governance.
He said Oputa was a humble philosopher cum judge who contributed immensely to the growth of the judiciary.
The Chief Judge of the state, Justice Ben Njemanze, thanked the governor for organising the session, adding that Oputa bestowed the legal firmament as a colossus. He said Oputa lived a life worthy of emulation.
On his part, the Chairman of the Imo Traditional Rulers Council, Eze Sam Ohiri, described Oputa’s death as a loss to the Igbo and Nigeria in general.
He said Oputa was a legal luminary who led an exemplary and great life and should be immortalised.
The National Chairman of the All Progressives Congress (APC), Chief John Odigie-Oyegun, pointed out that the late jurist established a brilliant reputation as an astute interpreter of the law, a formidable legal philosopher, a debater of the fine points of jurisprudence and a tireless social justice advocate.
Odigie-Oyegun said it was because of the qualities that the late Justice Mohammed Bello dubbed Oputa the Socrates of the Supreme Court.
“For Justice Oputa, moral integrity should always be the legal practitioner’s lodestar, the core principle from which not even the slightest deviation may be entertained,” he said.
He said that of Oputa’s many national and international recognition, his chairmanship of the Human Rights Violations Investigation Commission of June 1999 by former president Olusegun Obasanjo was outstanding. 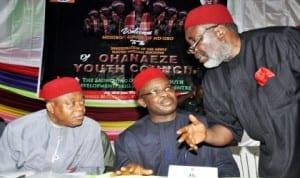