The leadership of All
Progressives Congress (APC) in Omuma Local Government Area has lauded the performance of the member representing Etche/Omuma Federal Constituency at the National Assembly, Hon. Ogbonna Nwuke.
The chairman of the party in the LGA, Hon Charles Amaefule stated  this  when he led members of his executive on a courtesy visit to Hon Nwuke in Port Harcourt recently, commended Hon Nwuke for attracting and executing developmental projects in Omuma and urged those aspiring for political offices to borrow a leaf from him.
The empowerment of Omuma sons by awarding scholarships to less privileged ones is a big investment in human development and also appointing an Omuma son as one of your personal aides” he said.
Amaefule assured the lawmaker of the support of the APC in Omuma and prayed that the Almighty God would guide and protect him in all his endeavours.
Also speaking, the chairman of APC in Etche Local Government Area, Hon. Musa Elekwa said he was not surprised at Hon. Nwuke’s track record of performance given the fact that his father who was a regional minister   in the first republic laid a solid foundation for the development of Etche and Rivers State in general.
Responding, Hon Ogbonna Nwuke said that he went to the National Assembly to complement the efforts of his predecessors in ensuring the well-being of the people of Etche ethnic nationality.
He noted that late Hon. Georgeford Nwosu whom he succeeded at the National Assembly was instrumental to the execution of the Omuma road project, saying that the late lawmaker would be remembered for the legacies he left behind.
Nwuke stated that arrangements had been concluded for the presentation of 110 tricycles to his constituents in addition to the seven vehicles and 129 motorcycles he had earlier distributed to other beneficiaries in his constituency.
He lauded the Rivers State Governor Rt Hon Chibuike Amaechi for his service,  emphasizing that,  “No other governor has done what Amaechi has done for Etche people. He has demonstrated strong vision; he has demonstrated love”. 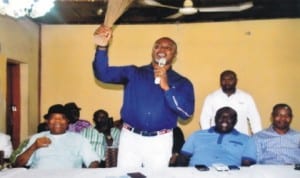